Muslim charity lashes back at regulator after cash seized at border

This may be a bit small scale and local (to me) but I bet its multiplied all over the west. From the East London Advertiser. Which used to be where my uncle looked for a decent used car, but is now the best place for news of the jihad and hijrah in East London.

An under-fire aid charity has accused the government of a “pattern of harassment” of Muslim organisations after a second inquiry was launched into its affairs. People working for the Shadwell-based Human Aid UK were stopped at a port carrying cash for the charity on Tuesday, July 9.

Police seized the money and the Charity Commission has launched a statutory inquiry into the organization’s affairs – the second in five years. Human Aid UK reported the seizure as a serious incident and has engaged lawyers to try to wrest the funds back. “These actions take place in the context of a larger pattern of harassment of Muslim charities at UK borders and prolonged scrutiny of Muslim charities by the Commission.” 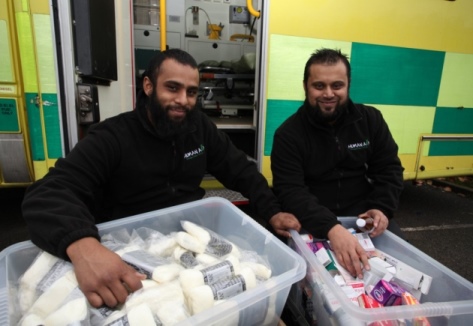 It marks the second probe into Human Aid UK by the watchdog after a previous investigation into its financial controls between 2014 and 2017.

In 2013 a volunteer was arrested over reports of unlicensed street collections, leading to a tightening-up of fundraising controls. Then in 2014 a fake collector was arrested in connection with fraudulent fundraising.

The first inquiry also examined invoices and receipts for ambulances during Human Aid UK’s 2013 aid convoy to Syria, and how UK funds were applied to projects in Turkey and Syria, where it found due diligence records and monitoring had been “incomplete”.

Saghir Hussain, the solicitor representing the organisation, said: “There will always be tension between the realpolitik of governments and the concerns of the humanitarian sector. When concerned citizens take personal risks to help the people of Syria and Gaza they should be applauded rather than subject to petty and coercive policies.”

The Charity Commission has said it opened the fresh inquiry “due to mismanagement and/or misconduct” at the charity, adding that cash couriering was a “live risk” in the wider sector

Regulatory advice issued in 2017 cautions against cash couriering across borders.

PrevKnife-wielding man in Brussels asks passers-by if they are Jewish
In Bologna, and Elsewhere, Muslim “Art Appreciation” ContinuesNext