Muslims and the Migration Issue 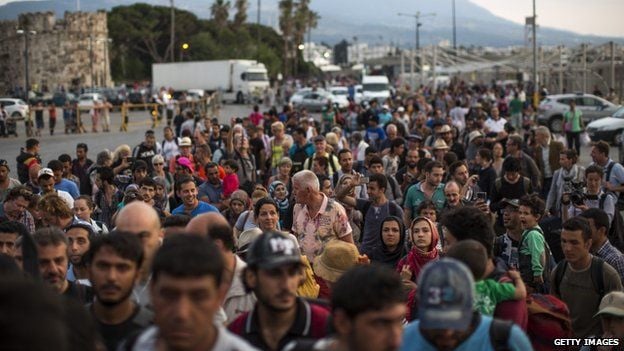 On December 3, 2017 members of the Trump administration, including Nikki Haley, U.S. Ambassador to the UN, and Secretary of State Rex Tillerson announced that United States would no longer take part in the Global Compact on migration. That compact, the non-binding New York Declaration for Refugees and Migration, signed on September 19, 2016 by 193 states committed them to a unified framework, a safe, orderly, and regular organization of all aspects of international migration.

Secretary Tillerson explained, a day before a Global Conference on the issue was to open on December 4 in Puerto Vallarta, Mexico, that the UN program is not consistent with the immigration policies of the U.S. which like all states has a sovereign right to apply its own immigration laws, and to control its borders.

According to the sixth century B.C. Greek philosopher Heractilus, none ever steps in the same river twice. Migration policy like all political phenomena is affected by the reality that the world and its population is in flux. By coincidence, the Global Conference in Mexico is occuring at a moment when the Pew Research Center has provided useful factual information about the changing population of Europe caused by migration, the first important estimates of the increase in the size of the Muslim population.

Even if not directly relevant to U.S. conditions, the data in the report is useful for its implications for European and U.S. attitudes to and debates on migration and foreign policy, understanding the tensions within political systems, the rise of far right parties, expressions of populism, and the results of voting in national elections.

The key terms, migrants, asylum seekers, and refugees, are often used interchangably, but regular migrants are those who legally move to Europe for economic, educational, or family reasons. Asylum seekers are migrants who apply for refugee status on entry into Europe.

The Pew study largely concentrates on changes in Europe between 2010 and 2016. The crucial fact is that the number of refugees has escalated since 2014. The record number of 1.3 million migrants applying for asylum in the 28 states of the EU, is nearly double the number in 1992 who applied after the fall of the Soviet Union.

There is no official tally of the migrant population and figures are not necessarily exact, and are affected by a multitude of factors. However, best estimates suggest that Muslims now constitute about 25.8 million or 5% of the population of Europe. That number is increasing, and the proportion is likely to double within a relatively short time, perhaps up to 14 % of Europe’s population by 2050, depending on the rate of migration into Europe. The number of Muslims in Europe grew considerably, through both natural increase but mostly by immigration. Some projections of German population is that it will be about 20% Muslim by 2050, and Sweden’s Muslim population could grow to 31%.

By comparison, the non-Muslim population in Europe declined by about 1.7 million. An important factor is that Muslims are younger and have a higher fertility rate than non Muslims. The average age of Muslims in Europe is 30, 13 years younger than the median in the 28 EU countries. Two aspects of this are pertinent; one is that 50% of all European Muslims are under 30, compared with 32% of non Muslims in Europe. The other is that Muslim women give birth to one more child than non Muslim women. Though migration between 2010 and 2016 was the biggest factor in the increase in population, and natural growth was secondary, there were 2.9 million more Muslim births than deaths during the period.

The important and relevant factor for policy makers is that the number of Muslim refugees has greatly increased. It is impossible to predict future migrant levels; they depend on changing economic and political conditions within and outside Europe, particularly the Middle East. But the rate of migration has increased since 2014. Between 2010 and 2013 about 400,000, on average 110,00 a year, reached Europe, but between 2014 and mid 2016 , three times as many, about 1.2 million or 500,000 a year came to Europe, as conflicts in Syria, Iraq, and Afghanistan continued or intensified. The conflict in Syria is the biggest driver for migrants.

The result has been increased tension in European countries and increased responses. Surveys show the wide diversity of views towards Muslims in the different EU countries. The highest unfavorable view of Muslims is in Hungary, 72 % of the population, followed by Italy, Poland, and Greece; the lowest proportion are in the UK, then Germany and France.

Hungary received 85,000 applications for asylum from Iraqi and Syrian refugees in the last five years, and most Hungarians, and a number of political parties, see this as a major threat. The Hungarian government in October 2015 closed its border with Croatia, and accordingly built a fence. Other countries, Greece, Italy, Poland, view the immigration of large number of refugees as a major threat. In contrast, in Germany, the main destination for Middle East asylum seekers, and in Sweden the number of those viewing the influx of refugees as a threat is comparatively low.

The result of the influx is that most of the European countries, not only those with far-right political parties, and also the EU as a whole, have tried to limit the flow of Middle East migrants. Migration will probably decline as European countries make policy changes to limit flows of refugees. The EU in September 2016, trying to deal with the disproportinate burden in the EU countries, voted to relocate 160,000 refugees among the countries. The Hungarian government rejected this plan. Britain also opted out of this quota plan but it did resettle 1,000 Syrian refugees in 2015.

Germany now plans to give asylum seekers who voluntarily return to their home countries a payment of 3,000 euros ($3,570). An earlier German program offered 1,200 euros to those returning home. In 2017 about 9,000 had participated in these programs. The EU in 2016 signed an agreement with Turkey. By it, Greece, Turkey’s neighbor, agreed to return to Turkey all new illegal migrants, while member states pledge to resettle more Syrian refugees living in Turkey and to increase financial aid for those remaining there. This was successful in substantially reducing the number of migrants coming into Greece from Turkey. Similarly, a common path for many migrants is to try to get by sea from Libya to Italy. The response of Italy working with the Libyan coast guard has been to try to stop ships carrying migrants in the Mediterrean.

European politics have reflected the issue. As a result of the German election in September 2017 when the far right AfD party gained some seats in parliament, Chancellor Angela Merkel agreed to limit asylum seekers to 200,000 a year.  Sweden has announced a tightening of refugee policy, requiring identity cards on all forms of transportation: in the October 2017 election Austrians voted for tighter controls on immigration. Almost certainly, immigration was a major factor in Britain in the vote for Brexit.

European governments and political parties are conscious that Europe’s population is expected to decline from its present 521 million to an estimated 482 million without any further immigration. They face a dilemma of allowing further migration of Muslims and the internal problems and tensions that might result. The problem is enhanced by the fact, of which the Trump administration is aware, that Muslims who now comprise 1.8 billion, 24% of the global total population,  is the fastest growing religion in the world. For Europe and the U.S. this is now part of the context of immigration policies.