I wondered what had rattled the cages of the likes of Islam 21 and 5 pillars. Then I discovered it was a recent podcast by couple of apologists for disgraced former teacher Tahir Alam. Which has been challenged and they, or the New York Times which hosted it,  have now had to correct. Oh dear. As we knew at the time, the letter itself may well have been a “hoax”, but I prefer to call it a device by which genuine threats and abuses were brought to public attention. And if you thought the scheming and conniving in Birmingham schools was far-fetched then I give you Oldham 2017 and  Batley Grammar School 2021.

The New York Times has quietly re-recorded parts of a “one-sided” podcast about the Trojan Horse affair following complaints, The Telegraph has learned.

The series, which is one of the most downloaded podcasts on Apple iTunes and Spotify, promises to tell the true story of how an alleged plot by hardline Islamists to take over state schools in Birmingham in 2014 prompted a national inquiry.

The Government ordered an investigation after an anonymous letter – widely accepted at the time as a hoax – was sent to Birmingham council containing a series of claims about an attempt to impose ultra-conservative Islamist views on children in state schools across the city. 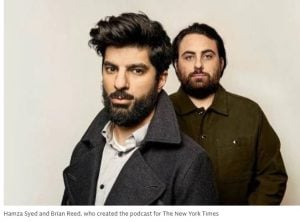 But the podcast’s creators, Hamza Syed from Dudley and New York Times journalist podcaster Brian Reed, have been accused of presenting a “misleading picture” of events and exonerating Tahir Alam, the alleged ringleader of the plot,

Mr Alam, the former chairman of governors at Park View, is now banned by the Government from holding any leadership positions in British education after he was found to have undermined “fundamental British values”.

Peter Clarke, a former counter-terror chief who headed the independent investigation into Trojan Horse, found that under Mr Alam’s leadership, Park View “sought to export its Islamising blueprint” to other schools.

Several individuals have submitted complaints to The New York Times about their reporting of events, including Richy Thompson of Humanists UK, an organisation which worked closely with whistle-blowers to raise concerns at the time.
“We believe the podcast presents a misleading account of our own involvement in these events,” Humanists UK said. “We have sought and continue to seek corrections and retractions from the NYT. To date they have made one correction but we still hope for more.”

Colin Diamond, a professor of educational leadership at Birmingham University who was hired by Birmingham Council to turn schools around in the wake of the Trojan Horse scandal, claimed that the podcast was “unethical” and “one-sided”.

Nick Timothy, a Daily Telegraph columnist and former special adviser at the Home Office between 2010 and 2015, accused the podcast of “attempting to rewrite the history of Trojan Horse” by putting a “fantasy narrative” above “established evidence and provable facts”.

PrevWeighing Our Losses
Egypt After the Passing of Sayyid Al-QimniNext