A man has been arrested after taking off his top and scrawling, ‘White children matter’ and ‘Stop Muslim grooming gangs’ on his skin. 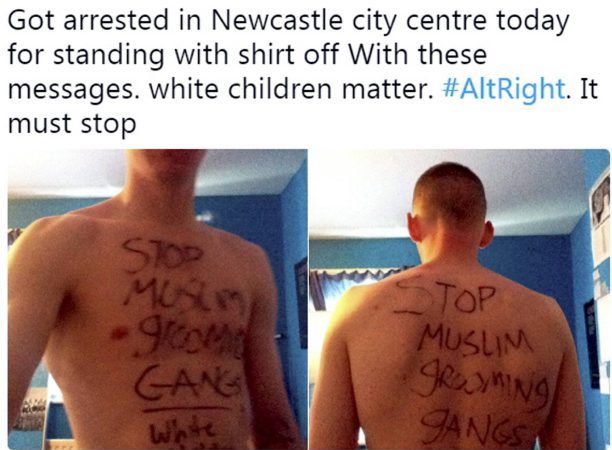 Unemployed Jimmy Lamb, 24, then stood on the street in Newcastle and Gateshead, before being arrested on suspicion of stirring up racial hatred.

Jimmy said, ‘I saw the stories in the papers about the grooming gang. I thought to myself, this is one race chasing another race because they think that race is inferior.

‘It frustrated me no-one would describe these people as Muslim, only Asian. I wanted to raise awareness that this is a serious issue and it is not going to go away.

‘The racial and religious elements have not been addressed. The responses I got from people were all positive. I even got a few handshakes.’

I haven’t been charged with anything but the police have told me they will be informing me via letter if they will be taking it any further.

‘To be honest, I hope it does go to court. If they prosecute me it will reflect badly on them.”

A spokesperson for Northumbria Police said: “We can confirm on Thursday, August 10, a 24-year-old man was arrested in Jackson Street in Gateshead on Suspicion of stirring up racial hatred by displaying written material.