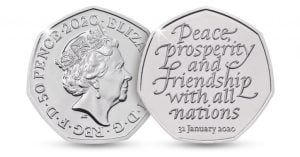 A friend of mine recently drew my attention to the 50 pence coin struck to celebrate the advent of Brexit in 2016. It was inscribed with the words PEACE, PROSPERITY AND FRIENDSHIP WITH ALL NATIONS. I immediately felt, if not quite sick when I saw it, at least queasy, and remembered the winking neon sign over Asunción in Paraguay when I arrived there years ago: PAZ, TRABAJO Y BIENESTAR CON STROESSNER (Peace, work and well-being with Stroessner). The coin’s slogan didn’t seem much better to me — or, in the event, superior as a prediction of the near future.

One expects such slogans from dubious regimes, which always proclaim three great goals or virtues: TRAVAIL, FAMILLE, PATRIE, for example, in the case of Vichy. I suppose it is for reasons of rhythm that the desiderata of such regimes, like buses, always come in threes. It is not a fact of nature, after all, that there are three, not four or five, desiderata.

Irrespective of the merits or demerits of Brexit itself, it seems to me a poor idea to have celebrated something that 48 per cent of the people didn’t vote for, almost rubbing their noses in their defeat.

On the other hand, since no one pays close attention to anything other than their smartphones, perhaps the striking of the coin didn’t really matter: but still I don’t much care for the obvious untruth of the slogan. For a start, it should have been evident to even the dimmest British politician that Brexit would incur the enmity of the majority of the European political class.

The coin was a manifestation of what might be called the attempted mission-statementisation of our minds, according to which some wishy-washy and generally bogus aspiration is taken as part-ambition, part-accomplishment.

I remember attending a meeting years ago at which our hospital’s mission statement was under discussion (this was in the days before the horrible NHS logo, designed to eliminate all local pride, was imposed). I suggested DR DALRYMPLE, WORKING TOWARDS EARLY RETIREMENT.