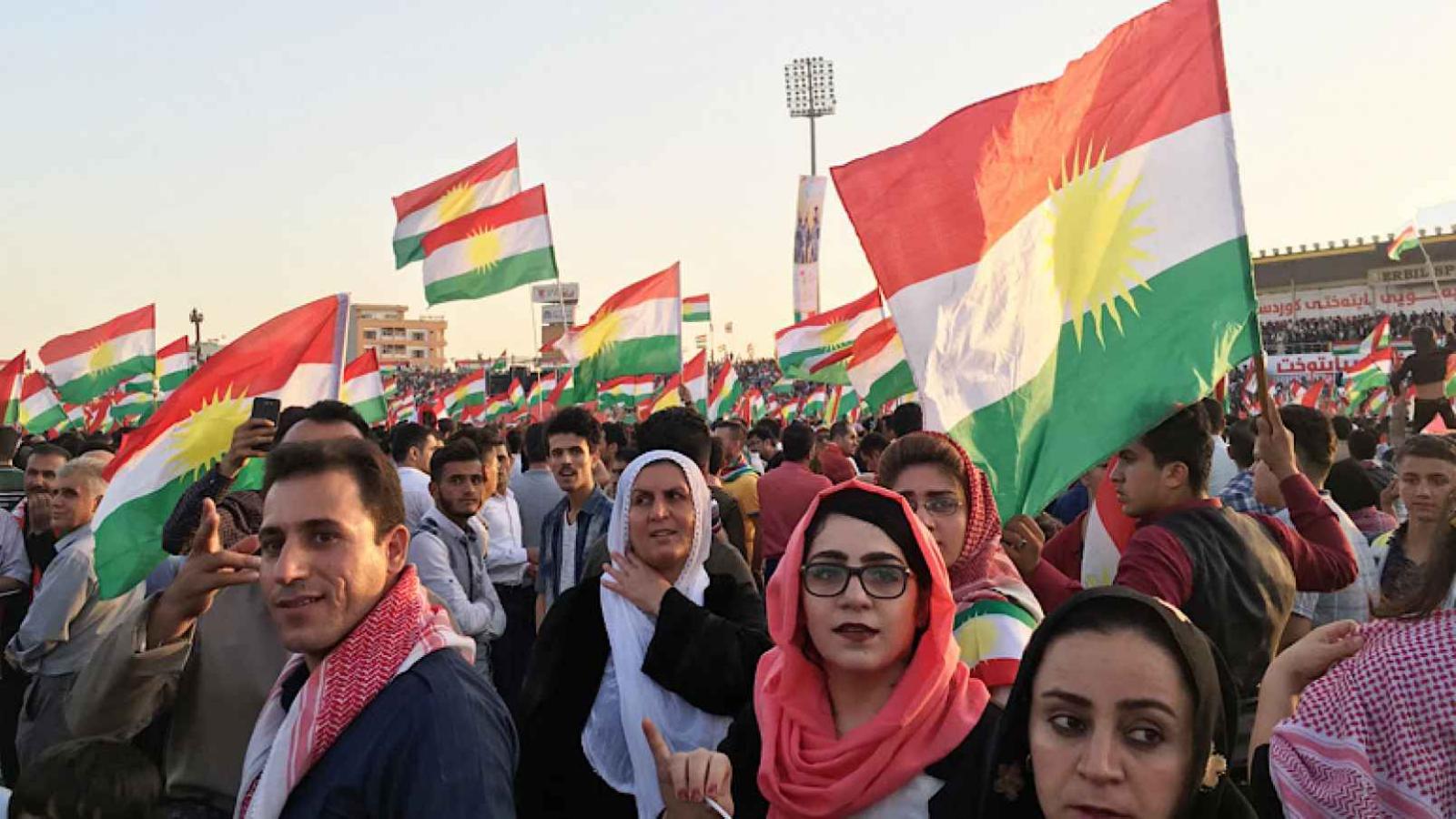 A decade ago, my friend Dr. Sherkoh Abbas, President of the Kurdistan National Assembly of Syria and I met with then Vice President Joe Biden’s staff to discuss the idea of an independent Kurdistan. Biden, at that time, was supportive of the partition of Iraq. In fact, the staffer responsible for the Iraq desk was a Kurdish-American woman. Although not a foreign policy top priority, the Biden administration should consider, once again, the idea of partition, and Kurdish independence.

The Iraqi Kurds are still aspiring to have their independent state. There are many reasons why Kurds would value being independent of Baghdad. The Kurds are not Arabs, while the power in Baghdad rests with Shiite-Arabs. The Kurds have their own language and culture, as well as their peshmerga Kurdish army and flag. The capital of the Kurdistan Regional Government (KRG) is Erbil, and it has its own parliament. Though Kurds are predominantly Sunni-Muslims, Kurds relish their secularism. There are 40 million Kurds in the region without a state of their own. With the exception of Israel, the Kurds are the most pro-American people in the region.

The Sunni-Arabs, who occupy the center and west of Iraq, have been restless and insecure since the fall of Saddam Hussein. The US “democratization” of Iraq elevated the Shiites to power, and replaced the dominance the Sunnis held throughout Iraq’s independent history. Iraq was an Ottoman province until WWI. The British governed Iraq under the League of Nations mandate until 1932, when the Hashemite King Feisal was installed as monarch in an “independent” Iraq. During the dictatorial reign of Saddam Hussein, Shiites and Kurds were suppressed, while the Sunnis enjoyed the privileges of power. Following the 2003 US war that displaced the Ba’athist government of Saddam, the Sunnis have lost their power base in the government and the military. Since then, the Sunni’s have been discriminated against by the ruling Shiites.

Shiite-Arabs, centered in Baghdad and southern Iraq, are the majority of the population in Iraq. Until the demise of Saddam, they were the poorest and most powerless group in Iraq. Now in control of all levers of power, the Shiites have done little to advance reconciliation between Iraqis. The Shiites close relationship with Tehran’s radical Ayatollah’s regime, has highlighted the religious dimension of the Baghdad regime, rather than fostering a strong unified Iraq.

Iraq isn’t and has never been an organic entity. Under the Sykes-Picot Agreement of 1916, the British and French divided the Arab territories of the former Ottoman Empire. Upon victory of the allies, the French received the mandate over the Levant (Syria and Lebanon), while the British got Mesopotamia (Iraq), and Palestine (Israel and Jordan). The British, to maximize their control over oil resources, created Iraq that comprised the Gulf oil (Basra) in the south, and Kirkuk in the north, mixing together diverse groups with little in common.

Peter Galbraith, former US ambassador to Croatia, and a strong advocate for Kurdish independence, published his book in 2006 titled “The End of Iraq: the American Incompetence Created a War Without End.” In 2008, he followed with another book titled “The Unintended Consequences: How War in Iraq Strengthened America’s Enemies.”

In a New York Times Op-Ed (July 25, 2006) Galbraith wrote: “The (George W. Bush) administration must match its goals in Iraq to the resources it is prepared to deploy. Since it can’t unify Iraq or stop the civil war, it should work with the regions that have emerged.” Galbraith continued, “Iraqi Kurdistan is among the most pro-American societies in the world, and its government would welcome our military presence, not least because it would help protect the Kurds from Arab Iraqis who resent their cooperation with the US during the 2003 war. American soldiers on the ground (in Kurdistan) might also ease the escalating tension between Iraqi Kurds and Turkey.” Today in fact, US troops are stationed near Kurdistan’s Regional Government capital of Erbil. My friend, Major Sam, has just returned from a tour of duty near Erbil.

Iraqi Kurds have suffered greatly as a result of being stateless. Under Saddam Hussein’s regime, Kurds had been victims of crimes against humanity and genocide, notably during the Anfal campaign by Saddam’s army in the 1980’s. Saddam’s forces systematically destroyed more than 4,000 Kurdish villages and small cities. In 1987 and 1988, Saddam used chemical weapons that killed as many as 182,000  Kurdish civilians.

In recent years, Iraqi Kurds have enjoyed the highest standard of living in Iraq. They have also enjoyed the highest level of foreign investments and security, albeit, they are yet to achieve their ultimate dream – an independent sovereign state. Kurds meet the criteria set by the UN for self-determination and independence. They meet the objective elements including common racial background, ethnicity, history, and cultural heritage. Kurds see themselves as a distinct “people.” The Kurds are also bent on maintaining a secular society in contrast to their radical Islamist neighbors in Tehran, Ankara, and to a large extent, in Baghdad. In 2004, two-thirds of Kurdish adults signed a petition demanding a vote on whether Kurdistan should remain part of Iraq. In a 2017 independence referendum, over 92% of Iraqi Kurds voted for independence.

There is no reason to deny the Kurds the same privileges that allowed Kosovo to split from Serbia, or the Croats, Slovenians, and Bosnians to seek independence from the former Yugoslavia. Similarly, Montenegro ended the union with Serbia, and the Slovaks did the same within the former Czechoslovakia. The radical and undemocratic regimes in Tehran, Ankara, Baghdad, and Damascus have banded together on a single issue – deny and prevent the Kurds from achieving independence. Turkey’s dictator Recep Tayyip Erdogan, fears that an independent Kurdistan would entice millions of Kurds in southeastern Turkey to seek union with the Kurdish state. Similarly, the radical Iranian Ayatollahs want to prevent some 10 million Iranian Kurds from joining their territory in northwestern Iran with the KRG. Shiite-led Baghdad deemed the 2017 KRG referendum illegal, and sent its army and Shiite militias to seize the oil-producing city of Kirkuk, a Kurdish majority city. Baghdad has thus denied the Kurds a major economic asset.

If outright independence of the three entities that comprise today’s Iraq is impossibility right now, federalism might be the second-best thing. It would require however, that Baghdad would agree to a fair distribution of the oil revenue, the return of Iraqi refugees, and the integration of militia members into local security forces. Implementing effective federalism needs decentralization of power, and delegating more authority to the regional governments. The Iraqi parliament would have to legislate such crucial laws as revenue sharing, and a hydrocarbon law, which would guarantee a fair distribution of wealth.

The Biden Administration would be wise to consider a physical barrier to Iranian imperialist expansionism under the strategy of the “Shiite Crescent,” that would enable Iran to control Iraq, Syria, Lebanon and the shores of the Mediterranean. An independent Kurdish state that combined the Kurdish areas of northeastern Syria (The Kurdish-led Syrian Democratic Forces in the area are major US allies) with the KRG would constitute a proper answer to Tehran, and a just cause for the US.

PrevIsrael Tells Nasrallah ‘We Know Everything About You’
Blacklisting Woody AllenNext