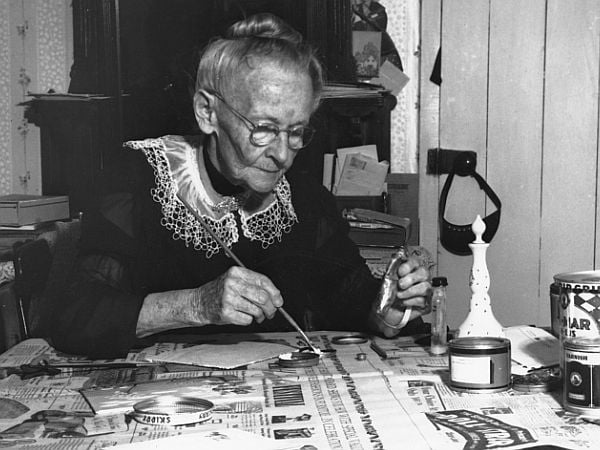 Old age has had bad press on the whole, doubtless for good reasons. And yet it is not always a vale of tears and nothing else. To meet the sprightly old can be an inspiration. Recently, I have had the good fortune to meet two very old people whose continued pleasure in life put to shame my inclination to grumble about everything and nothing.

The first was in the British Museum, in London. I had just come out of a marvelous exhibition about the Scythians, my knowledge of whom could previously have been comfortably fitted into two lines. A well-preserved elderly lady who had also just emerged from the exhibition, and who was dressed in very sensible shoes, thick warm stockings, and a black overcoat, was fixing her old-fashioned hat with a hatpin, the like of which I had not seen since my grandmother died nearly 60 years ago.

“Very good exhibition,” I said to her.

“Yes,” she replied. “Very. But I didn’t really learn much about the Scythians that I didn’t already know.”

“Oh, really?” I said, rather surprised, having assumed that everyone was as ignorant as I.

“No,” she said, “nothing about them has changed much since the thirties, when I started to read about them. But I’m glad I came. It’s always nice to see the artefacts in the flesh. I’ve always been fascinated by archaeology.”

The thirties? Surely no one would start reading about the Scythians before the age of 12, and if she were 12 in 1939 she would be 90 now. She was quite possibly older, nearer 100 in fact.

“Nice to talk to you,” she said, and went her way as vigorously as someone half her age, her hat perfectly arranged.

Two weeks later, in Paris, I went to the 90th birthday celebration of a relative of my wife. She had been extremely ill three years ago but had survived two major operations completely intact. She had been married to her husband, who was four years older than she, for 68 years, having first met him when she was 8. Now aged 94, he still drove with her every year hundreds of miles down to the South of France.

I sat beside her for a time. She told me that she still read for four to five hours a day, particularly history. At the moment, she was reading a biography of the Duc de Saint-Simon. But she and her husband also liked to go to public lectures, as they always had. She started to speak with unmistakable enthusiasm of the last that she had attended.

The original speaker had cancelled because of illness, but the stand-in spoke on a subject about which she had known nothing, even of whose existence she was ignorant: namely, the methods of camouflage and deception employed by the French army during World War I. For example, at that time, pilots were still obliged to fly by landmarks to reach their targets: the confluence of two rivers, for example. There, the French would raise huge smokescreens, so that the German aircraft no longer could see where they were or where they were headed. And the men in the trenches employed large numbers of wax models that they held up to deceive the Germans as to the numbers of soldiers in the trenches.

She spoke of all this with the pleasure of a young girl who had learned something completely new. No doubt a happy old age is largely a matter of luck, but it must also be partly a matter of attitude to the world, so various, so beautiful, so new.