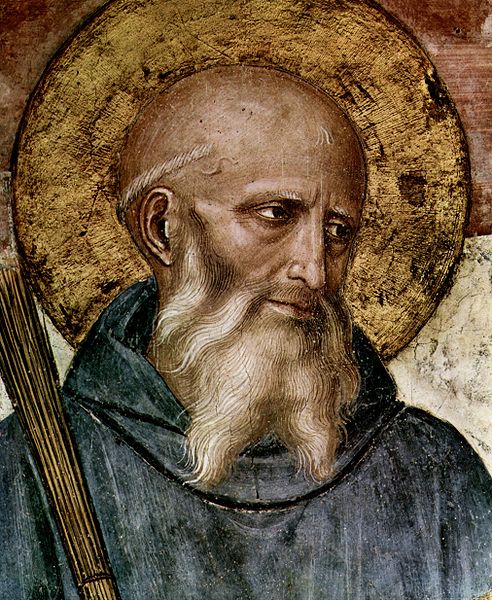 After decades of cornering Christians in the public arena, Catholics and Evangelics in the West are getting ever closer while they are seemingly in retreat. Many of those who finally woke up to the reality of bans on free speech and public exercise of religious freedom are now finding themselves discussing the “Benedict option” – a reference to the founder of the eponymous order for invigorating the creed in the 6th century CE. The eponymous book has just been published in the United States by Rod Dreher, frequent contributor to The American Conservative (http://www.theamericanconservative.com/dreher/the-benedict-option-under-trump/). Today pious Christians in the US are forced out of the mainstream discurse and as a result begin retreat into small protected communities. There alone, they believe, committed families can survive by fostering moral values with their own offspring – reminding us of close-nit, almost ghettoized, Orthodox Jewish or Muslim communities with their independant infrastructure including food and schools.

By contrast Eastern Christians today enjoy mainstream status in Russia or Eastern Europe. Yet in the wider diaspora in Arabia or parts of Asia Christians are being persecuted or expelled. Even in Europe Christians are increasingly under attack and marginalized. As the author of a book on the history of the sexual revolution, due later this year, I am surprised to learn from a a piece in the American Conservative that Christianity from its onset has been all about hedging the sexual drive. Surely this is only partly true and more for the East than the West. For Christianity in its Hellenized rendition had itself a big role in “liberating” sexuality, or adulterating freedom from the flesh into freedom of the flesh. While both branches of Christianity parted company with the schism in 1054, the divide became irreversible only during the Renaissance when the Reformation wreaked havock to divine transcendence by internalizing Christ.

The Reformation in effect replaced large parts of the liturgy and sermons with music such as Bach‘s Cantates which were regarded as “God‘s voice” stirring up faithful emotions instead of fidelity and conscience. It was Rabbi Joseph B. Soleveitchick who demonstrated that Luther in particular has lowered monotheist metaphysics to raw emotions as the arbiter of Christian piety. Bach seized specifically on Luther‘s translations of psalms and translated them into his famous scores, described by some as “homiletic music” speaking to human emotions. Large parts of Eastern Europe and Russia however remained untouched by this reformatory zeal.

We have to look further back to Pauline theology if we are to understand this divide. Paul deserted the Jewish family man called Jesus by creating universal Christianity. This eventually organized his individualized followers into sisterhoods and brotherhoods. Thus the centripetal family would be subsituted by centrifugal peer groups transcending the local community and turning Jewish particularism into monotheist universalism. An example for this is Paul‘s famous letter to Galatians (3:28-29): “There is no longer Jew or Greek, there is no longer slave or free, there is no longer male and female; for you are all one in Christ Jesus. And if you belong to Christ, then you are Abraham’s offspring, heirs according to the promise.“ Pauline theology would be assisted by the “verbal reductionism” of John‘s gospel (“the word alone”). This was bound to eventually generate a backlash with the final return of the naked Hellenist body: Oscar Wilde‘s gay artist “coming out.”

All the same Rod Dreher‘s claims about Paul as the first to regulate pagan sexual promiscuity by instituting marriage is only partly true. Rather monogamy was introduced as the bedrock of Jewish “guilt-and-forgiveness-culture” long before by Moses who tied it to monotheism at Sinai. Moses took the heart the lessons of the disastrous “shame-and-honor-culture” of previous patriarchal polygamy. In effect Paul watered down the Jewish family bond by alienating Christ from the preceding Jewish family man as Bernard Starr has shown in his “Jesus uncensured – the authentic Jew.”

In this way Paul was even preparing the ground for centrifugal “individual sexuality“ if only implicit. This issue would put Western Christianity on the downward path of abandoning priestal marriage, still observed by the early Christians. It survived only in Judaism, Eastern Orthodoxy and Islam. The bifurcation between both camps has been fascilitated by the “filioque” controversy that ran over half a millennium, starting in Chalcedon, a suburb of Constantiopel around 450 CE and ending with the East-Western schism in 1054 CE in Toledo.

Western Christianity is only today paying the full price for its fight over “filioque” against Orthodoxy. This amounted to nothing less than “emancipating” the son from fatherly authority with huge and not yet fully understood consequences – only one of which was adding weight to Freud‘s Oedipus saga. Not for nothing did psychoanalysis never catch on in Orthodox countries like Russia or Israel. But more dramatically still, “filioque” finally rescinded divinely ordained authority form the family man and subsequently from both parents. From there issued the unrelenting rebelliousness of bourgois offspring in the West. Freud‘s meta-historic Oedipus-dogma was unsuccessful in its aim of domesticating and instead universalized the sexual revolution.

For this we have to blame perpetual Hellenization going on since the Renaissance which has disrupted the continuity of Western Christianity. Jesus Christ is an essentially Greek concept bound the paradigm of anthropomorphic beauty and reckless visibility. It runs against the grain of the monotheist God who is deemd to be invisible and who can only be listened to. This takes care of naturally mortifying human conscience. Under those Hellenistic influences Catholicism canonized celibacy in 900 CE by that forcing manly sexuality into hiding. The consequences have been brutal and bloody with Vatican subsequently suffering various blows of mortifying child abuse scandals. By contrast the Eastern church allowed priestal marriage thus leaving the crucial link between divine and fatherly (parental) authority in place, sustaining what might be called the “Jewish soul” of Christianity. It is because of this precious heritage, preserving in particular the essential link between the second and the fifth commandment over the long duree, that we are seeing a vigorous rejection of gay marriage only in the Eastern Orthodox churches. By comparison in most Western Christian denominations the central tenet of traditional marriage is crumbling under the pressure of the sexual revolution. Obviously recklessly secularized Israel is a special case here to be dealt with on another day.

To sum it all up: Christianity is harvesting the fruits of Paul‘s early abandonment of the parental authority embedded in the Jewish particualrism which is inimical to Hellenic universalism. From there hails the religious instruction as a priviledge of the natural family. Which is why quite logically neither Judaism nor Orthodoxy are doing any mission work. Having possibly internalized Freud, Dreher wrongly maintains, it is sexuality that defines monotheism. However my take is that rather the “immortality of the soul” is at its heart, for it unites the generations, Edmund Burke‘s “living, dead and not yet born” through the obligation to pass on the tradition of the revelation at Sinai to ones own children. Dreher cites Philip Rieff who was in charge for editing Freud‘s collected works in the New World, while not crediting Rieff with his genuine discovery of the counterintuituve Christian role in the sexual revolution. It is now high time to take measure of the fatal contribution of the Reformaion to the sexual liberation for it injected even more Hellenism into the gospel. Freud in particular created a Jewish variety of Protestantism. This is what psychoanalysis comes down to: internalized or “cannibalized” Christian Trinity as a solvent of parental authority. The reversed instinct-led triad  of “id, ego and super-ego” conceived as “therapeutic deism” is subject to the causalistic fallacy because it conflated religious transcendence with Greek metaphysics. In his London exile 1939 at the end of his life, Freud finally woke up from his Hellenist slumber yet it was too late. Nor did he live to see the consequences of his moral cannibalism unleashing the bohemain wave of the sexual revolution in the West.

First had been the clerical wave orchestrated by the Renaissance Popes, the Canterbury Tales, Boccaccio‘s Decamerone, the Borgias‘ siblings escapism and Luther‘s primitivism, followed by the aristocratic decadence of the Marquis de Sade that set off the French Revolution. It is for this reason that the recent turn towards Orthodoxy by Western Christians, Catholics and Evangelicals alike, brilliantly articulated by Rod Dreher, are coming far too late. There is still a lot of hypocrisy on display and in the case of Dreher some historical revisionism. In order to save Christ‘s innocence two millennia of Western Helleninsm have to be accounted for. 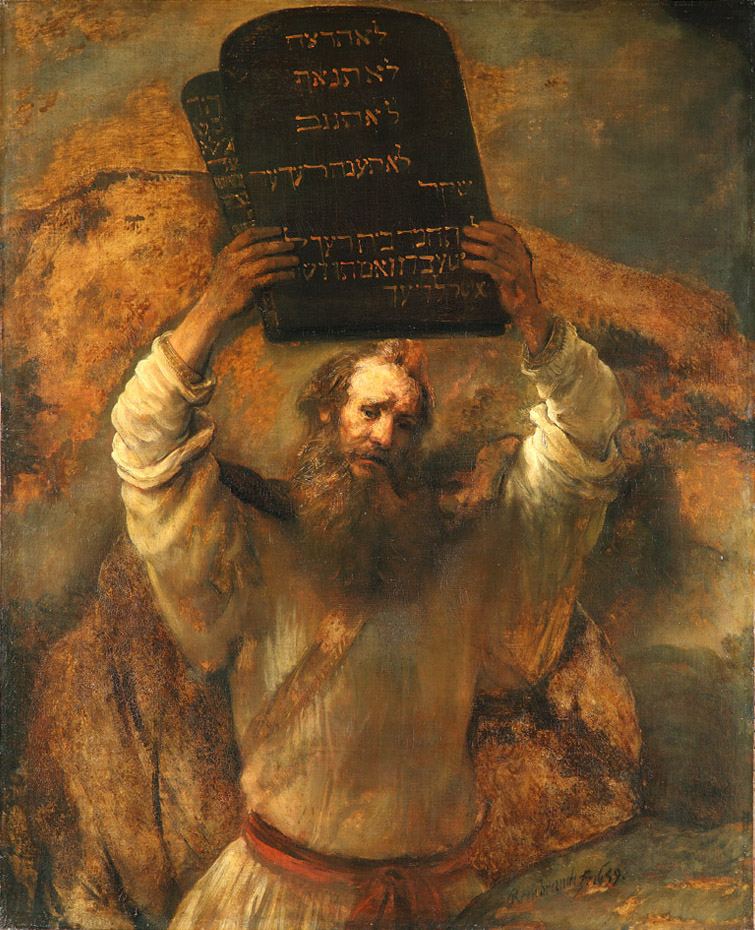 Rembrandt van Rijn: Moses breaking the Tablets of the Law, 1659

In truth Judaism and Eastern Orthodoxy both from the very onset retained priestal marriage and never wavered on the role of parental authority in controlling the sexual drive. The male part of this has always been precarious because of the natural excess testosteron. It is ironic that in the new world of fake sexual identities testosteron has become a secret weapon for transsexual‘s false claims on Olympic honors. This belongs to the unintended consequences of permissive occidental church teachings or waivers regarding the second and the fifth commandments regulating the biblical image ban and parental authority respectively – a result of the Reformation, which did not touch Eastern Orthodoxy.

None less than the philosemite Rembrandt van Rijn hit upon the Dutch reformist adulteration – a nice English ideomatic connotation – of the traditional reading of the Decalogue (Exodus 20:1–17 and Deuteronomy 5:4–21). In particular the reformers had corrupted the fifth commandment (honor your parents!) as the principal lock between the two equal groups of commandments: duties against God versus duties towards man. For it endowes parents and fathers in particular with a divine blessing. Again it is only from the English word “divination” which is the pagan version of providence that we get an idea of the natural legitimacy of parental authority pointing to clairvoyance or farsightedness.

In any case the restoration of parental divination is the motive behind Rembrandt‘s rendering of Moses descending from Mount Sinai. Which is why he aimed at correcting the mistaken unequal separation of the ten commandment. The reformers posited only the first four commandments as duties toward God leaving the rest for fellow men. By that the Calvinists removed the crucial overlap concerning fatherly protection, divine and worldly, or protection proper by the family man and the divine Being respectively. This is the manly duty for which nature obviously supplied the excess male testosteron, which it had to be sublimated in Scripture. Therefore Moses‘ original version of the fifth commandment carried a double meaning: honoring both the divine and the worldly father. For a good reason had this been wrapped into one commandment for good, putting the fifth above all other commandment right at the center of the Decalogue. It certainly lends organic support for the “vertical in authority” (Philip Rieff) which over the millenia did an excellent job in keeping the family together. Because the Dutch reformers had broken this asunder Rembrandt has put it right back – an observation which I owe to Rabbi Meir Soloveitchick in New York.

Dr Friedrich Hansen is a physician and writer. He has researched Islamic Enlightenment in Jerusalem and has networked on behalf of the Maimonides Prize. Previous journalistic and academic historical work in Germany, Britain and Australia. Recently he has published in the Adam Smith-Blog in London, essays in the Asia Times in Hong Kong, in the Times of Israel in Jerusalem and recently in the Russian-Orthodox magazine Katehon in Moscow. He is currently working in Germany.