On The Kingdom of Speech 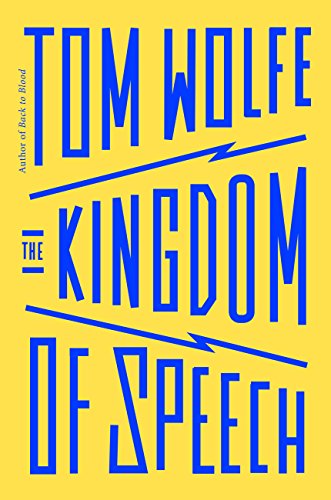 Tom Wolfe’s The Kingdom of Speech is a short book with four themes.

The first is that the ethnographic evidence provided by anthropologist and linguist Daniel L. Everett, based on decades of participant observation and a thorough, analytic, experience-based documentation and mastery of the language and culture of an isolated tribe, demonstrates that many aspects of the “universal grammar” that linguist Noam Chomsky has proclaimed for more than four decades, are contradicted by the evidence of the structure, tenses, and semantics of the language of the Pirahã Indian people, who live in the Amazon river basin. Chomsky’s universal grammar is… not universal.

The second is that the trajectory of Everett’s career and his ultimate challenge to the Chomskyan monopoly on the nature of language is a strange twentieth-/twenty-first-century recapitulation of the relationship between Alfred Russel Wallace, the working-class collector of exotic plants and animals in the tropics, versus the upper-class establishment-based collector and scholar, Charles Darwin.

The third theme is that if we accept that Everett has shown that the emperor has no clothes—that Chomsky’s language machine and universal grammar may not indeed be universal, nor cross-culturally valid—then all rigid Darwinian/Chomskyan schemes to explain the evolution of language have come to naught.

The fourth and final theme, or conclusion, is that language may be a human invention. It may not be hardwired into the brain and universal in the way Chomsky and his followers have argued. It is now open to a more empirical and philosophical investigation.

Wolfe does an excellent job of showing how the sociological equivalent of Thomas Kuhn’s scientific paradigm took over linguistics after World War II. Chomsky and his followers made linguistics quantitative, transformative, and created the notion of the transformational grammar. The implication was that with a finite number of sounds and words and limited grammatical transactions an infinite number of sentences could be generated. Thus, his generative grammar. As an undergraduate studying the rudiments of anthropological linguistics in the 1970s, I simply assumed that he must be right.

And so Everett’s destruction of Chomsky’s stranglehold on language demonstrates that perhaps not all grammars are the same. They must therefore be the result of historical development. Perhaps Darwin was right, and there is some sort of evolution in language as suggested by Russian historical linguists such as Aharon Dolgopolsky, who have shown that there has been an evolution or development of language groups going back to the Proto-Nostratic of perhaps eighty thousand years ago, the first language spoken by hunter-gatherers in East Africa, which, from there, moved out into the world.[5]

We need not assume that Proto-Nostratic was the basis of universal grammar. It may simply be the origins of all grammar. And grammars may have changed over time and developed into Afro-Asiatic, Proto Indo-European, Sino-Tibetan language families.

The second theme suggests that Alfred Russel Wallace never quite got the scientific recognition for his co-invention of the theory of descent from natural selection and for which Darwin is universally known. Wolfe is at his most devastating when he shows how Darwin’s mentors took Wallace’s extensive, more than thirty-page essay that boldly and clearly outlined the theory of natural selection and had it presented on the same day as Darwin’s unpublished rough draft. As a matter of fact, it would appear that Sir Charles Lyell and others managed, falsely, to make the discovery a “co-discovery” by encouraging Darwin to write soon thereafter On the Origin of Species, for his book subsequently eclipsed Wallace’s primacy in the discovery and announcement of evolution until today.

Yet Wallace always thought of Darwin as his friend and benefactor. He was a pallbearer at his funeral! So, yes, that Darwin did not have sufficient moral strength to defer to Wallace’s primacy in the discovery of natural selection falls into the Marxist model that would argue that Darwin was indeed to some degree a prisoner of his class and its prejudices, as much as Wallace was a victim of the lower-class origins that made his life so hard.[6]

Wolfe argues that Everett and Chomsky are analogues of Wallace and Darwin. Yet there are many differences between the dyads. Chomsky was and remains a self-declared Marxist aristocrat. He believes that scientifically, with regard to language, he is and always has been in the vanguard. He believes that politically, as a good Marxist, he is in the moral and political vanguard. Unfortunately, as a “vanguardiste” he takes on the predictable authoritarian style of the commissar, both intellectual and political, and he has shamelessly tried to discredit Everett as not “Ivy League.”

And so, at a deep anthropological level, the prestige hierarchies of class in nineteenth-century England that made Wallace the sidekick of Darwin are replicated here in America, and now make Chomsky the self-appointed king of his own ivory tower. Chomsky has wanted to make sure that a mere Protestant missionary (for SIL International)[7] cum ethnographer/ethnographic linguist such as Everett is not able to destroy the Ptolemaic-like spheres within spheres of Chomsky’s universal grammar. (By the way, the quality of Everett’s prose in Language: The Cultural Tool is first-rate and his thinking is influenced by Plato as well as ethnography. Everett is no stranger to the world of ideas.)[8]

There is something funny about Chomsky. Apparently he speaks no foreign languages, certainly not fluently, nor has he ever studied a tribal language. Despite the fact that he is a Marxist, he epitomizes that nineteenth-century disdain of the office-bound English imperialist who did not believe in learning the language of the “natives.” It was enough to rule them at a distance from London and Whitehall, as Chomsky does from MIT.

I truly believe that the preindustrial world is disappearing and that the goal of anthropology is to document cultural differences as extensively as possible (in some cases for decades, as did Everett) and from as many angles as possible. But this will not happen. Anthropologists are now supposed to be advocates for “social justice”—or they’re supposed to be servants of women’s studies or any other form of identity studies. They no longer do long-term participation/linguistic immersion in foreign cultures. And there is no institutional money for it. The Carnegie Mellon Foundation is too busy giving charlatans like Judith Butler, Maxine Elliot Professor of Comparative Literature at the University of California, Berkeley, 1.5 million dollars for “excellence in scholarship.”

Tom Wolfe ends The Kingdom of Speech by reminding us (as Wallace would have) of the unique language of the Bible and its enduring legacy. Wolfe implies that this cannot be explained by Darwin. There’s something mysterious out there. It is called language. Perhaps now that the curse of Chomsky’s monopoly is passing, we will be able to explore it with new eyes and new ears. It is a kingdom worth entering.

First published as part of a symposium at NAS.

PrevTerror suspect says children killed in Manchester bombing ‘got what they deserved’
Rift in the Gulf: Saudi Arabia and QatarNext