We know too many modern “feminists” didn’t take male violence against women and girls seriously enough when the violent man is a ‘person of colour’ and the girl is white working class. The vigils for Sarah Everard were a right thing; but they were only allowed to happen because her assailant was white (and a serving policeman to boot) and she herself appealled to middle class modern ‘feminists’.

This is from The Telegraph Graphic from the Daily Mail

In the wake of sex scandals that have rocked the charity, Oxfam has produced guidance which states that: “Mainstream feminism centres on privileged white women and demands that ‘bad men’ be fired or imprisoned”.

Accompanied by a cartoon of a crying white woman, it adds that this “legitimises criminal punishment, harming black and other marginalised people”. 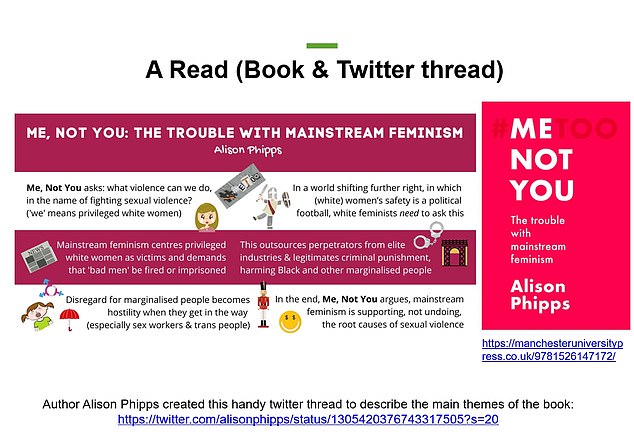 It advises staff to read a controversial book which concludes: “Mainstream feminism is supporting, not undoing, the root causes of sexual violence.”

However, the charity was warned on Wednesday night that the document, compiled by its LGBT network and seen by The Telegraph, could breach equality laws as it suggests reporting rape is “contemptible”.

recommends that staff read Me Not You: The Trouble with Mainstream Feminism, a book by Alison Phipps, a professor of gender studies at the University of Sussex.

Summarising the book’s central premise, the Oxfam document says white feminists need to ask themselves whether they are causing harm when they fight sexual violence.

It then links to Prof Phipps’s Twitter account and a thread which summarises the main themes of the book, including: “White feminist tears deploy white woundedness, and the sympathy it generates, to hide the harms we perpetuate through white supremacy.” There we go again – “white girls need to shut their mouths for the sake of diversity.”  I know that specific tweet was a spoof but it spoofed a real attitude, and the people like Labour MP Naz Shah who ticked their approval of it did indeed show their true feelings. Except this time it isn’t lowly working class girls on grim proletarian estates who need to be quiet; it is the university educated sisters of the bourgeoisie.

“The message seems to be that a woman who reports a rape or sexual assault to the police and presses charges is a contemptible ‘white feminist’,” said Naomi Cunningham, a discrimination and employment law barrister.

The training manual was written after the charity’s LGBT+ network wrote to the leadership team demanding that they publicly support trans people and suggested that any debate about rights was part of a “patriarchal and white supremacist narrative” used by the far right. “To argue that trans-inclusivity would undermine the vital work we do for women and girls is not only transphobic, but also perpetuates the white saviour complex that assumes that we know best for the people we work with.” It says that it is “transphobic” to question whether men who identify as women could pose a threat to women…

The document produced in the wake of the complaint tells staff that protecting single-sex spaces for women has “contributed to transphobia and undermining of trans rights”.

Julie Bindel gives her opinion at theend to the Telegraph report. Speak as I find, Julie Bindel is almost unique among modern professional feminists in speaking up for the abused girls of Rotherham, Rochdale and elsewhere who are victims of the industrial scale Islamic rape gangs.

I would have hoped that a charity concerned with inequality and oppression would make combatting sexual violence a priority, writes Julie Bindel. Particularly one whose own history in this area is dubious at best. . . looking at the document that forms part of Oxfam’s training programme, Learning about Trans Rights & Inclusion, you would think that sexual violence was an imagined problem, dreamed up by racist or fragile white women.

Feminists have fought for sexual assault to be taken seriously. The low conviction rate is evidence that this battle is being lost. If we are now to further dismiss women’s experiences as simply “tears” what hope do we have for this endemic problem to ever be taken seriously?

Calling women who have been traumatised by male sexual violence or campaign against it “privileged” because they are white is staggeringly offensive. To further claim that white women give more power to the police by reporting their rapists loses sight of the fact that if sexual predators did not face serious consequences, they remain a danger to all women.

Does Phipps imagine that when “white, privileged” women demand that sexual harassers be removed from a workplace that they do not care if these men go on to rape impoverished black women?

As far as I am concerned, Oxfam is peddling not feminism in its training, or rather indoctrination programme, but anti-feminism. In suggesting white women are “racist” or harm black and marginalised people when they speak out about rape is nothing more than a warning for them to shut up.