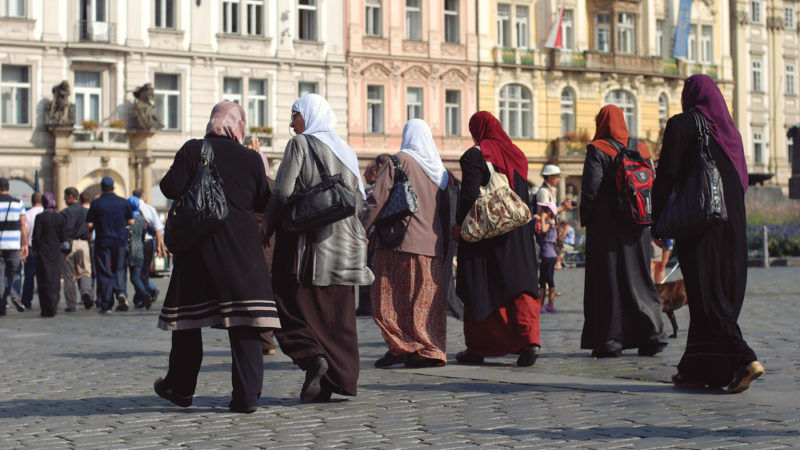 The issue of immigration increasingly perplexes the Western world, including the U.S., as more people want to move for economic or political reasons, for family reunification, to escape from natural disaster areas, and seek better conditions of wages, employment, education, and standard of living. A double problem arises: the numbers to be admitted by host countries; and the extent of the integration of those who have been admitted. Both aspects are controversial and now cause difficulties for Western societies.

The issue of integration of immigrants is foremost among them. It is evident that immigrants tend to settle in separate neighborhoods of like-minded persons, relatives or compatriots from the old homeland. The expectation has been that after a generation or two the migrants would integrate into the national society, become socially cohesive, and accept the constitutional values of the country. This model is now being disrupted in Europe by Islamism, the ideology that Islamic laws should be considered superior to national civil law, and which has turned immigrant neighborhoods into “parallel societies,” in which core principles of Western societies are, to varying degrees, disregarded. Salafist groups, Wahabist influences, the Muslim Brotherhood, use religious and cultural concepts to separate Muslims from the rest of society.

It is instructive to examine the response in two European countries, Denmark and France, to the problem of migrants prone to Islamist influence. Denmark, which has had restrictive immigration policies for some time, now has a population of 5.8 million of whom 6% are considered “non-western.”  Its government in March 2021 has announced plans to strengthen its policy on “disadvantaged neighborhoods,” formerly called ghettoes, by reducing the number of what it calls non-western residents in the areas to a maximum of 30%. These areas are defined by high unemployment rate, lack of secondary education, below gross income level, high crime rate. The prediction for the country is that too many non-western foreigners in one area runs the risk of the creation of “parallel societies.” These are organizations of an ethnic or religious minority advocating  and eager to implement adopting alternative values and reducing or eliminating contact with the majority society.

France, while not using the same terminology as Denmark, faces the migrant problem of homegrown and imported Islamist radicalism in a different way. From the early 19th century France has had a tradition of admitting asylum seekers, mostly Europeans, Italians, Poles, Spaniards, more than 100,000 IndoChinese refugees after World War II, North Africans, and political refugees. Those immigrants qualified for health care and other benefits, in medical programs reserved for them. Some migrants engaged in “medical tourism,” seeking treatment for serious medical conditions in French hospitals. However, in 2019 as a result of considerable increases in requests for asylum, France began to set up a system of annual quotas to grant visas to skilled immigrants wanting to enter the country. President Emmanuel Macron declared that French authorities had been lax in expelling those who had entered France illegally.

Basic to French life is the concept of laicite, which originated in 1905. Though legally undefined, it guarantees the right of religious belief so long as it does not violate public order. Laws and rules establish the preeminence of a secular state over religious, originally Catholic, principles. Differences emerge in the understanding of “secularism” and the extent to which the state should go in asserting religious neutrality in the public sphere. However, central to the purpose of laicite, is that all people, irrespective of race or religion, are legally treated in universalist fashion, without differentiation, as citizens with equal rights.

This concept is being challenged by the increasing Muslim population in France, causing Balkanization along religious and ethnic lines, as ethnic and social enclaves have been created in the country, and the social fabric of France is being questioned by the immigration from North Africa.

France has the largest number of Muslims in the western world. They constitute more than 8% of the population, some of whom are affected by Islamism, extreme forms of Islam. One result is that the country has been confronted with terrorist attacks committed in the name of jihad.

President Macron in October 2020 called for tougher measures to tackle what he terms “Islamist separatism,” to defend secular and democratic values. Macron is critical of an ideology that seeks to build a parallel society, networks, schools, sports, in which religious rules would take precedence over civil laws . This would subvert the separation of religion and state, ideals of the French Republic, liberty, equality, and fraternity, and the principle of laicite, separation of religion and state. The impact of this parallel society led to more than 2,000 French citizens leaving to take part in jihad in the Syrian civil war, and more than 250 French people  killed  in terrorist attacks in France between 2012 and 2018.

The string of those attacks includes the massacres on January 7, 2015 of 12 killed and 11 injured at the offices of the satirical newspaper Charlie Hebdo by two French Muslim brothers, the stabbing outside the French consulate in Jeddah, Saudi Arabia in November  2020, , the attack on police officers in Avignon by a man armed with a knife, the beheading on October 16, 2020 of Samuel Paty, a history teacher, who had shown cartoons of the prophet Muhammad to his  middle school history class as part of a lesson on free speech, in Conflans, outskirts of Paris, by an 18 year old Muslim  living 60 miles away, after he had seem misinformation on the social network, the murder of three people by a young Tunisian at a church  in Nice.  Three factors are interesting: the impact of social networks in spreading misleading information as in the case of Paty’s killer; the growth of Islamism in the prison population; the killings were by youngsters, a mix of French and foreign Muslims.

Macron’s argument is that the six million Muslims in France may be in danger of creating a counter society.  To counter this and to free Muslims from the growing grasp of radical Islamism, he proposes, among other rules, restrictions on home schooling so that children can attend public schools, all secular, at age three, to prevent radical teaching, and control of extremist imams and mosques. Interestingly, he also acknowledged past French deficiencies which had the effect of creating neighborhoods where the promise of the Republic was not kept.  Instead banlieues, troubled suburbs with a high proportion of Muslim residents who may suffer from economic segregation or even racism were created. Macron has called for an Islam of Enlightenment, one that can be at peace with the Republic. French government policy is to prevent or limit a separate Islamist identity outside of French civil society, and to pass laws of emancipation against religious fundamentalism.

Not surprisingly, controversies arise over the limits to be imposed on separate Muslim identity. Already in 2004, religious symbols and headscarves were banned from public schools. More controversial are bans on Islamic face coverings, on ending segregated pools for men and women, on burkinis, the full body swimsuits designed to respect modesty codes for Muslim women. Are these bans repression or liberation?

Fearing Islamist separatism, Macron has called for an “Islam of Enlightenment,” one that can be at peace with the Republic. But action is essential. The National Assembly, vote of 347-151, on February 16, 2021, approved measures to strengthen government oversight of mosques and religious schools, to limit hate speech, and make it easier to inspect and shut places of worship that get public subsidies. Religious associations and mosques must declare foreign funding of more than 10,000 euros, and will have to respect French republican values to receive state subsidies. Government can close mosques, associations, and schools if they offend those values.

Strict religious neutrality is extended beyond civil servants to those working for public services.

Separatism is defined as threatening violence or assaulting an elected official or a public service employee. The bill bans “virginity certificates” provided by doctors for traditional Muslim religious marriages, and also polygamy and forced marriage.

The proposed French laws do not mention Islam or that they are directed against Islamism. They are framed as laws to reinforce the principles of the Republic, to reinforce secularism and gender equality, and to prevent dividing French people from one another.

Denmark and France have acted to reject Islamism, an extremist intransigent ideology, one in which the role of martyrdom and endorsement of terrorism, is inherent.  It is not racist or colonialist to safeguard democratic and Enlightenment values to call for its elimination.

PrevThe Biden Administration is Determined to Undo Trump’s Most Important Achievement
H.R. 1 is Emblematic of the Crisis of American DemocracyNext