As I said some time ago, and several times, word is out about that which menaces us.  The authorities were pleased that they thought the EDL was diminished by their persecution of Tommy Robinson and other members. Thankfully information once known cannot be widely unknowed. Small groups are forming and their, our voices WILL be heard. I know nothing about this group; I have heard of them only in the last 30 minutes. 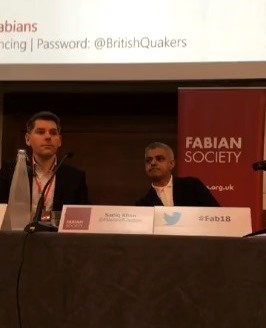 But they embarrassed Sadiq Khan at the Fabian’s Conference, venue the Quaker Meeting House on Euston Road, this morning and while the Telegraph calls them ‘pro-Trump’, and I expect that is accurate, I can see that they are also English patriots, with old style London accents.

From the Telegraph Sky News and the bush telegraph (aka elsewhere)

Pro-Trump supporters disrupted a conference being held in London where Mayor, Sadiq Khan was set to make a speech.

The Fabian society, a socialist organisation, had their conference interrupted after a group of pro-Trump demonstrators shouted their support for the US President.  The protest was apparently against comments made by the Mayor of London about Mr Trump’s plans to cancel his trip to the UK.

Mr Khan was about to start speaking to the Fabian Society in London when he was disrupted by protesters from a group called the White Pendragons who shouted pro-Trump and pro-Brexit slogans.

In a video posted on social media, one man could be heard saying: “Ladies and gentlemen, we’re here today to make a non-violent, peaceful citizen’s arrest.”

But a protester, unperturbed by the reception, said: “”We stand under Common Law jurisdiction. If you touch us, you’ll be done for common assault. Please stand back, do not touch us. We’re not leaving, we’ve paid for a ticket.”

He also accused the Fabian Society of “subverting” the constitution.

The Chairlady, Scottish left wing MP Kate Green (who tweeted in the early hours about her excitment to be meeting such luminaries as Sadiq Khan, Kier Starmer, Wes Streeting and Polly Toynbee) tried to get the demonstrators to obey her instructions and move away but they argued with her, which I don’t think she is used to. In the end they left in orderly fashion when asked to by the police. One wonders why so many police had to be present at a meeting of a bunch of woolly minded, woolly bearded, woolly hatted socialists. The Fabians were very nasty once – I fear they are so again.

PrevTrudeau’s jolly progressivism and America’s revival will bring back the brain drain
Guatemala, the US and Israel share important valuesNext