A terrorist who killed three people during a stabbing spree in a Reading park has pleaded guilty to their murders.

Khairi Saadallah, 26, left three men dead and three other people seriously injured when he launched a knife rampage in Forbury Gardens in June. The victims, James Furlong, David Wails and Joe Ritchie-Bennett, were friends who had been sitting enjoying the evening sunshine and a socially-distant drink when they were targeted and stabbed to death. 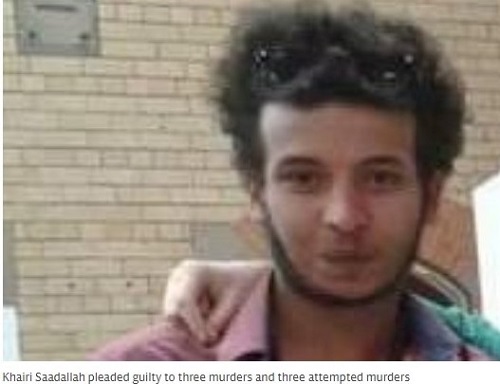 Saadalla, who came to the UK from Libya in 2012, was chased by police and arrested on a nearby shopping street.

On Wednesday, he pleaded guilty at the Old Bailey to three murders and three attempted murders.  Saadalah had been due to go on trial at the Old Bailey on November 30, but instead pleaded guilty to the charges against him at a pre-trial hearing.  Saadallah, of Basingstoke Road, Reading, entered his guilty pleas in the dock of court two of the Old Bailey. Wearing a red and white beany hat and grey jacket, the defendant’s voice appeared muffled as he spoke while wearing a face mask.

The judge told the court the defendant had submitted a basis of plea, denying substantial preparation or planning and saying he was not motivated by an ideological cause, in contrast with the prosecution case. Alison Morgan QC, prosecuting, told the court there was a “a substantial degree of premeditation” and said the defendant’s crimes merited a whole-life order – meaning he would never be released.

There is now expected to be a hearing in front of the judge to determine the issue ahead of sentencing.  Mr Justice Sweeney is expected to adjourn the hearing to a date to be fixed when he will hear evidence about the triple killer’s motivation before passing sentence.

It emerged in the wake of the attack that Saadallah was put on the security service’s “radar” less than a year earlier following a tip-off that he was planning to travel to his native Libya, where it was feared he wanted to join a militant jihadist group.