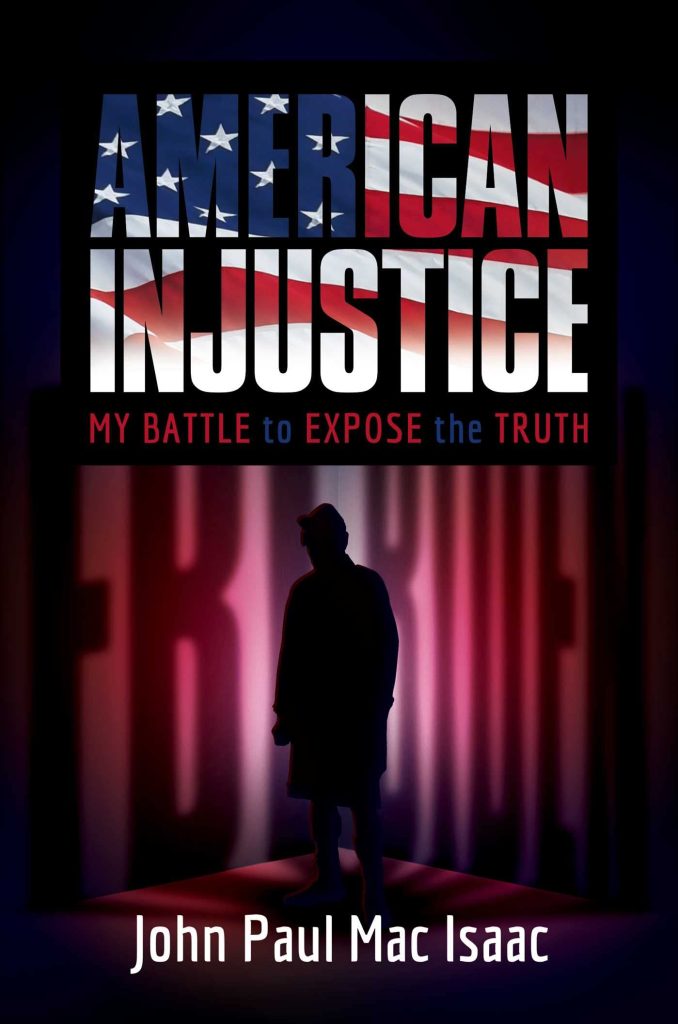 Yesterday, I received the newly published American Injustice by J. P. MacIsaac. He is the computer repairman who received a laptop from an intoxicated crackhead scumbag that turned out to be Hunter Biden and who later neglected to pick it up. The book details what transpired after that.

As is my usual habit with the unending line of books I order, I read a few pages just to get a taste of it, intending to put it down and read it days, weeks, months, or years later.

Well, actually, I did put it down. That is, for five minutes to start one of the tasks only to go back and pick up reading where I left off.

I had seen the awful movie My Son Hunter (why can’t conservatives make decent movies?) and although the movie had a bad screenplay, on viewing it I learned a few things regarding Hunter’s crimes.

Anyway, MacIsaac relates how, on repairing the laptop he uncovered a tremendous amount of selfie videos of pornography, using drugs and, more importantly a treasure trove of illegal activities that Biden’s son took part in. the latter included documents of multimillion dollar embezzlements and bribes received by the Bidens, as well as evidence of collision with Ukrainian and Chinese thuggish oligarchs.

But, more importantly, the author reveals how thoroughly rotten the FBI has become—and not just the FBI. The book reads like a suspense thriller—which it is. It reads like a conspiracy theory—except the conspiracy was real.

FBI agents had no interest at all in the matter and he almost forced them to get involved. And once he gave the evidence to the FBI, including the computer itself (he kept copies), not a thing was done about legally following through on the crimes. He was even warned not to talk about the matter to anyone else. What the agents did was a passive-aggressive form of obstruction of justice.

He realized early on that the information that he had accidentally acquired was so explosive, with so much at stake, and the players so ruthless that the danger of being “suicided” was not as outlandish as one might think.

Nonetheless, for many months thereafter, MacIsaac was consumed with frustration as he continued to do right by his country and bring the evidence out into the public, after he finally realized the FBI was going to do nothing, but it seemed no one was interested. This parallels what happened in Canada in 1948 when Igor Gouzenko, an officer in the Soviet Union’s embassy tried to defect, in the process carrying with him documents detailing espionage activities by the Soviets. Likewise, no one was interested.

He finally contacted Rudy Giuliani who got the ball rolling. Once the evidence was made public through the New York Post, the malignant media hivemind went into overdrive in spiking the story. Facebook, Twitter, and Google suppressed any mention of the story, once again confirming their censorship policies (Hunter Biden had contact with Google executives).

As for all the tentacles of the media hivemind, the official Party line went out: it was Russian disinformation. All the components of the media hivemind began to parrot the Party line. A number of former security officials (John Brennan, Leon Panetta, Russ Travers, Glenn Gerstell, Richard Ledgett, Marc Polymeropoulos, Cynthia Strand) signed a letter that it was Russian disinformation without even bothering to look at the evidence, unified in their obsessive hatred of Donald Trump, and the election was near.

Although he had repeatedly asked for anonymity, predictably the young author’s identity was revealed, and he began to immediately receive hundreds of insults and threats by people who instantly swallowed the Party line. He had tried to remain anonymous throughout. All he wanted to do is maintain his business, build a life and home in Wilmington. But Delaware is a liberal state. At his restaurant and watering hole, strangers would come up to him and ask him how much Putin had paid him for what he had done. His liberal girlfriend dumped him. His tolerant and inclusive friends turned against him. He was called a fascist. His customers abandoned him. Ultimately, he closed his dying business and left Delaware, broke.

This book would make a good Christmas gift.