Saudis Alarmed At Prospect of Biden Rejoining the Iran Deal 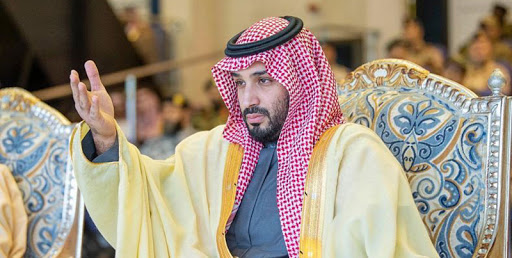 Israel and Saudi Arabia are the two countries most threatened by Iran, and both have been well-pleased with President Trump’s withdrawal in 2018 from the nuclear deal with Iran and the imposition of crippling sanctions on the Islamic Republic, that have helped to bring that country economically to its knees. Iran’s major source of wealth, revenues from oil, have decreased by 96% in the last two years; exports of 2.5 million barrels a day have dropped to 100,000.

The less money Iran has, the less it has available to give to its proxies and allies around the Middle East, as it attempts to build a “Shia crescent” from the Gulf to the Mediterranean. These proxies and allies include the Houthis in Yemen, the Iran-backed Shia militias in Iraq, the forces of Bashar al-Assad in Syria, and Hezbollah in Yemen. Iran has had to slash those subsidies by at least a billion dollars a year. Hezbollah, Iran’s most important ally, has seen its former $800 million in annual aid from Iran cut by at least $300 million this past April, with further reductions – the amounts are still unknown — having been made since then. And Iran also has much less money to spend on its expensive nuclear program. Despite the obvious success of the American sanctions policy in constraining Iran, the Biden people are making plans as quickly as possible to return to the nuclear deal (JCPOA). They prefer for the U.S. to again be part of a group, in returning to the fold of the JCPOA, where the U.S., under new management, can rejoin U.K., Germany, France, Russia, and China, instead of continuing Trump’s Go-It-Alone sanctions policy that has proven so successful.

Israelis are justifiably alarmed at the prospect of the Americans rejoining the JCPOA and ending Washington’s latest and most effective sanctions on Iran; the Saudis are perhaps even more anxious than Israel about what they see as a possible future Biden administration’s overtures to Iran. Here is the latest report from Riyadh: “Sunni Arab states worry Biden administration will roll back sanctions on Iran,” by Daniel Siryoti, Israel Hayom, November 9, 2020:

Across the Arab world, reaction to the outcome of the US presidential election has ranged from satisfaction to grave concern.

The moderate Sunni Arab states have not concealed their concern President-elect Joe Biden may sign onto a new nuclear deal with the ayatollah regime in Tehran.

It was only on Sunday night, 24 hours after Biden had been declared the winner, that Saudi King Salman sent a message of congratulations to the Democrat from Delaware. The delay is indicative of just how disappointed the Saudis are that US President Donald Trump will not be continuing on as president. In a conversation with Israel Hayom, senior officials in the kingdom even went so far as to call Biden “a pro-Iranian president” who they say will adopt a “conciliatory policy toward Iran that will put the region at risk.”

Riyadh confirmed that US Special Representative for Iran Elliot Abrams was set to arrive in the kingdom this week as a part of a short trip to Israel and Saudi Arabia aimed at discussing the Iranian threat with senior officials in both countries. A senior Saudi official told Israel Hayom that the trip had been planned before the outcome of the election was announced.

While the official emphasized that no agreement to normalize ties between the two sides was currently in the works, the official did say that, Biden’s entry into the White House would not negatively impact the kingdom’s desire to maintain relations with Jerusalem. Instead, according to the official, a Biden administration would serve to bolster the alliance currently being forged between Israel and the moderate Arab states.

A senior official in Abu Dhabi admitted there was “serious concern that the cabinet of Biden’s advisors will be composed of [former US President Barack] Obama people, and the Biden administration would remove sanctions on Iran.”

Officials in Egypt and Bahrain also expressed their disappointment at Biden’s victory.

In contrast, the Palestinian Authority appeared to breathe a sigh of relief at the election outcome, with PA President Mahmoud Abbas’s senior advisor Nabil Shaath describing the news as “a great achievement for us.” Abbas congratulated Biden on his victory on Sunday.

What happens if the current sanctions regime ends and the U.S. rejoins the JCPOA? Right now Biden’s chief foreign policy adviser, Tony Blinken, has said the new administration would “seek to build on the nuclear deal and to make it longer and stronger if Iran returns to strict compliance.” But how likely is it that that can be accomplished? Hassan Rouhani has already said that Iran will not accept any changes to the JCPOA terms – which means Tehran will not come back to the table if the Americans try to make the nuclear deal, as Blinken says, “longer and stronger.” In a tug-of-war, I suspect that the other members of the JCPOA will take Iran’s side, urge the Biden administration not to change anything in the JCPOA, and the accommodating Biden administration will yield to this request, putting Iran back in the catbird seat.

When the JCPOA was in full effect, with America still participating, Iran continued to pursue both the creation of a “Shia crescent” from the Gulf to the Mediterranean, and to continue work on its nuclear program. As the IAEA (International Atomic Energy Agency) announced in 2019, Iran had been “violating all the terms of the agreement. Iran has continued to increase its stockpiles of enriched uranium and remains in violation of its deal with world powers,” said the United Nations’ atomic watchdog. The latest sanctions imposed by the Trump Administration have brought ruin to Iran’s economy, and that, along with Israel’s cyberwarfare, assassinations, and sabotage, that have delayed Iran’s nuclear progress. The Biden people are determined to mess with that success.

The International Atomic Energy Agency reported the finding [about Iran’s violations of the JCPOA] in a confidential document distributed to member countries.

Iran signed the nuclear deal in 2015 with the United States, Germany, France, Britain, China and Russia. Known as the Joint Comprehensive Plan of Action, or JCPOA, it allows Iran only to keep a stockpile of 202.8 kilograms (447 pounds).

The IAEA reported that Iran has also been continuing to enrich uranium to a purity of 4.5 percent, higher than the 3.67 percent allowed under the JCPOA. It is also above the pact’s limitations on heavy water.

Instead of the stockpile of low-enriched uranium that Iran had committed itself to under the JCPOA – 447 pounds — the IAEA found that Iran had been surreptitiously accumulating an amount far bigger of 1.73 tons, or 3,460 pounds, more than seven times the amount it was allowed to have. And Iran also violated the agreement by enriching that uranium to a purity of 4.5 percent, when under the JCPOA the limit was set at 3.67 percent.

How does the Biden Administration propose to get Iran to comply with the terms of the JCPOA, when all previous attempts have failed, and Iran continues even now to defy the five members — the U.K., France, Germany, Russia, and China – of the JCPOA (soon to be rejoined, thanks to Biden, by the U.S.)?

Given the Biden Administration’s abandonment of what worked – the Trump Administration’s regime of severe sanctions, in order to reembrace what didn’t work, the JCPOA that Iran violated in every way it could, it looks as though Israel and the Gulf Arabs will have to deal with Iran’s nuclear program on their own. Israel has done so much already to delay the progress of that program. Their Stuxnet computer worm, first identified in 2010, caused at least 1,000 of Iran’s centrifuges to speed up so fast that they destroyed themselves. Mossad agents assassinated, one after the other, four of Iran’s top nuclear scientists. In 2018, Israeli agents managed to locate, seize, and spirit back to Israel Iran’s entire nuclear archive, with 100,000 documents, offering evidence of how Iran managed to conceal so much of its program for so long. Finally, this past year Israeli agents, in a daring act of on-site sabotage, destroyed a new plant at Natanz where advanced centrifuges were being built. That last effort is estimated to have set back Iran’s program by up to two years.

Naturally all these incredible feats of derring-do by Israel, in slowing down Iran’s nuclear program, have won the admiration, and the quiet gratitude, of the Saudis and Emiratis. And now that the Biden Administration will be weakening the pressure on Iran by ending the crippling sanctions, and returning instead to reliance on the JCPOA, which Iran, a party to the deal, has in the past nonetheless managed to circumvent, in acquiring a stockpile of low-enriched uranium seven times the limit allowed and also in enriching uranium far beyond the level permitted.

Given all this, Saudi Arabia is likely to draw even closer to Israel, now its most trustworthy and valuable ally in the campaign to prevent Iran from acquiring nuclear weapons. In the folly of its plan to end sanctions on Iran and to rejoin the JCPOA, the soon-to-be (much too soon to be) Biden Administration has already demonstrated to Riyadh that the Saudis can no longer count on America in the long twilight struggle with Iran. But the Saudis have a powerful ally in their neighborhood, that has given example after example of how imaginative, daring, relentless, and ruthless it can be in slowing down Tehran’s nuclear plans. Even before taking office, Joe Biden has one significant foreign policy accomplishment, one he certainly did not intend: he has pushed the apprehensive Saudis, who feel they can no longer count on the U.S. to deal satisfactorily with Iran, ever closer to Israel. The Saudi Crown Prince Muhammad bin Salman might even convince his father that the Saudis should now follow the examples of the U.A.E. and Bahrain, and normalize relations with what has become – mirabile dictu – Saudi Arabia’s most important ally, the Jewish state of Israel.

It’s the Law of Unintended Consequences. In the next four years of the Biden administration, we shall no doubt see many other examples. Hold onto your hats. It’s going to be a bumpy ride.

PrevThe Battle Is Far From Over
European Empire, FracturedNext