Signs of the Changing Times 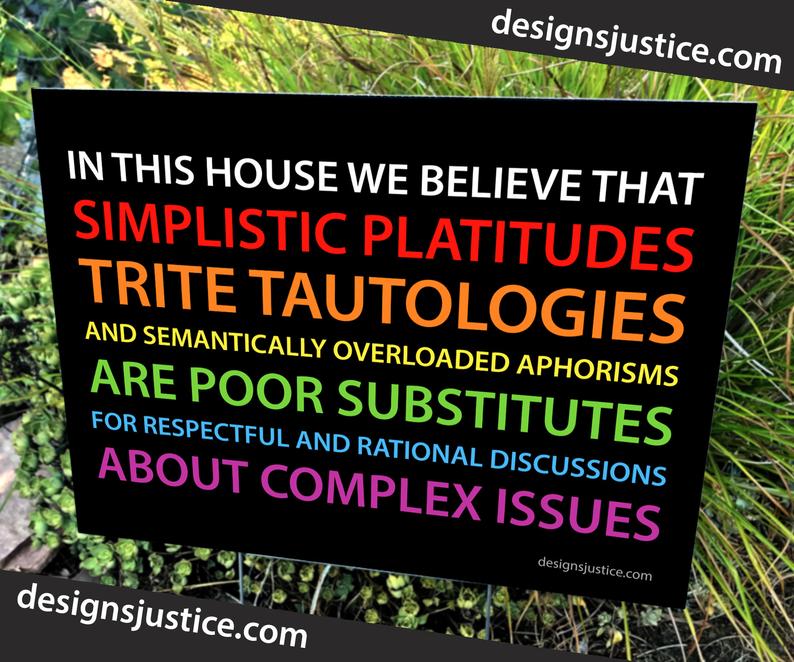 Ubiquitous before November’s presidential election, the “Hate Has No Home Here” yard signs grow scarce as Joe Biden’s presidential inauguration approaches. So do their more dogmatic companions, the “In This House We  Believe” declarations. Mission accomplished.

Their mission? Not only helping defeat—in the guise of nonpartisanship—President Donald Trump, but also advancing the post-liberal left’s fundamental transformation of America’s self-understanding.

The “Hate Has No Home Here” signs, with their medium blue background, white typeface and red, white and blue heart logo, looked like repurposed Obama-for-President” installations. Notwithstanding contrary accounts of their origin, that’s just what they were, at least semiotically.

The heart focal point replaced the Obama “O” and “Hate Has No Home Here” substituted for “Obama for President.” The English slogan repeated multiculturally in Urdu, Arabic, Korean, Hebrew and Spanish.

“Hate,” of course, has become today’s all-purpose label not just for specific bigotries, like anti-black prejudice or hostility toward Jews, but rather for any opinion partisans disagree with. Opposing generic hate, for example, rather than fighting antisemitism, is how the once-fearless Antidefamation League came to partner with the Rev. Al Sharpton—he of the 1991 Crown Heights pogrom and 1995 Freddy’s Fashion Mart arson, both murderous.

When the battle is against “hate” rather than specific prejudices, even Sharpton—a  frequent White House visitor in the Obama years—gets repackaged as a civil rights leader.

The Chicago Tribune sourced “hate has no home here” to autumn, 2016. Neighbors in North Park—where local elementary school students came from homes in which 43 languages were spoken—wanted “a peaceful poster to hang in windows. They agreed it should counter the divisive nature of the … presidential election.”

That is, it should oppose Republican candidate Trump’s demeaningly expressed hostility to illegal immigration and, soon after, President Trump’s temporary ban on immigration from seven Muslim- majority countries.

The sign spread rapidly, its success signifying half the country’s “resistance” zeitgeist. A related but more encyclopedic yard sign quickly emerged in Madison, Wisc. On a black background, with lines in white, red, yellow, blue, green and purple, it announced, in the manner of a papal bull:

“In This House, We Believe/ Black Lives Matter/ Women’s Rights Are Human Rights/ No Human Is Illegal/ Science Is Real/  Love Is Love/ Kindness Is Everything.”

Ideological cotton candy as holy writ. Of course, no human being is illegal. But Earth’s 7.8 billion people certainly don’t all have legal right to live in the United States.

Of course, black lives matter. Does anyone, outside a lunatic fringe, claim otherwise?

However, inscribed over the entrance to the U.S. Supreme Court are the words “Equal Justice Under Law.” Each individual’s right to life, liberty and the pursuit of happiness matters, regardless of race, religion, sex or national origin. Regardless and even in defiance of identity group politics.

Just so, the Black Lives Matter, Inc. movement requires scrutiny. Its 70-plus page manifesto in 2014, since partially scrubbed, opposed capitalism, whites, the nuclear family, police and prisons, “hetero-normativity,” the Jewish state of Israel and other woke progressive demons.

As for kindness, it counts for much. But not everything. The Talmud reminds us of the law of unintended consequences: “Those who are kind to the cruel end by being cruel to the kind.”

A contrarian yard sign counters the virtue-signaling fatuousness of “In This House We Believe …” It states, “In this house we believe that/ Simplistic Platitudes/ Trite Tautologies/ And Semantically Overloaded Aphorisms/ Are Poor Substitutes/ For Respectful And Rational Discussions/ About Complex Ideas.”

The odds of it too “going viral” in an America suffering social media-induced attention deficit syndrome and leftist “cancel culture” of dissent are small.

One may blame President Donald Trump, anathematized for four years by Democratic leadership, news media, academia and Hollywood, as he refused to say good-bye. But it was President Bill Clinton who gave us “the permanent campaign” and President Barack Obama who, unlike his predecessors, upon leaving the White House stayed in Washington as backstage resister-in-chief.

Obama now profits from his third autobiography and, with wife Michelle, from a deal to produce programs—long-form commercials for themselves and Democratic Party policies—on Netflix. Meanwhile, his former senior staffers populate president-elect Joe Biden’s team.

Neither Obama, Trump nor Biden has or will bridge America’s mile-wide divisions calcified by inch-deep slogans. Can’t you read the signs?