From the Telegraph. Proceedings are over for today. These are snippets.

The suspected terrorist who is standing trial accused of stabbing veteran Conservative MP Sir David Amess had an eight-point plan saved in his phone detailing how to kill Michael Gove, a court has heard. 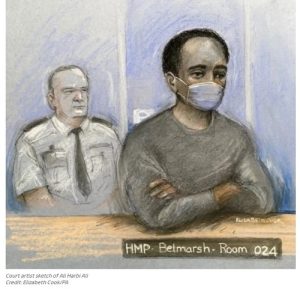 Ali Harbi Ali, 26, denies murdering the MP for Southend West as he met with his constituents at Belfairs Methodist Church in Leigh-on-Sea, Essex, on Oct 15.

On the opening day of the trial at the Old Bailey, the jury heard how Ali written a digital note in his mobile phone, stating that the best way of killing the Housing Secretary Mr Gove was to bump into him whilst jogging.  Ali had also looked up pictures of Michael Gove’s home, but decided against attacking the prominent minister after learning Mr Gove had split up with his wife and the house had been sold.

The jury also heard Ali had bought the knife used to stab Sir David five years earlier in preparation for a different attack.

The prosecution say Ali is a “committed and fanatical Islamist terrorist” and that the MPs murder was an “assassination” and an “attack on democracy”.

The jurors were told how Ali got a midday appointment on Oct 15, 2021. He sent Sir David Amess an email claiming to be a worker in the health sector and in one exchange with a member of Sir David’s staff, he said: “I’m not sure how long appointments take, but I don’t think it’ll take too long.”

With Ali sat across from the desk from Sir David at the constituency surgery, his phone chimed with a notification sound or ringtone as if he’d received a message.  At this point, he said “sorry” to the MP, then pulled out a knife and stabbed him 21 times, the court heard.

The defendant said that he woke at 4am on the day of the attack and was nervous, so went to a mosque for prayers then “steeled himself” to travel to Leigh-on-Sea by train. He took with him a knife with a 12in blade he had purchased about five years ago from Argos “for maybe to carry out a terror attack” for around £20.

Tom Little QC for the Crown said: “Just pausing there. The defendant is therefore saying that for a period of about five years he has had a knife which was purchased in the possible contemplation that it would be used for a terror attack, as it was eventually used for just such an attack.”

As he was early, the defendant said he went and stared at the sea and read the Koran. He then walked to the Methodist Church and was shown in for his appointment. He said this to police about the murder: “I just remember stabbing him a few times in the places where I stabbed him and I think the finisher was probably on his neck over here – at his jugular – because when I pierced it, dark red blood came out, so at that point I knew that unless the ambulance get here within the next second he’s gonna bleed out.

“I think where I wanted to hit his neck, y’know when you kill, even Islamically you’re supposed to do it in the best way…”

Ali said he became self-radicalised in 2014-15, the prosecution told the court. His initial focus was to make ‘hijra’, but he “kept on going with life” and went to university.

Hijra, an Arabic word meaning migration or travel which in the context of jihadism means to travel to Syria to fight alongside terror groups, the jury heard.

But “the obligations on me to take revenge for the blood of Muslims is too great”.

Mr Little QC told the Old Bailey: “He considered he had an obligation to perform jihad in the United Kingdom.

“By 2021 the defendant conceded that he had run out of excuses for not carrying out an attack and he began to research targets.

“He decided his target would be the 523 MPs who carried out a vote to carry out airstrikes in Syria.

“He identified them using the website theyworkforus.com. His aim therefore was to ‘influence the politicians’.”

Finishing his opening remarks, Tom Little QC closed with five “important observations” for the jury. This includes the fact that no mental health defence will be put forward in relation to Ali Harbi Ali, the Crown told the Old Bailey.

Additional electronic devices were found at the defendant’s home address in north west London when it was searched on Oct 16 2021.  A Lenovo laptop was recovered from the defendant’s bedroom, on the bed. It was forensically imaged and keyword searches conducted:

Mr Little QC told the jury that “in addition were a series internet links which speak for themselves as well as images of high profile terrorists” including Jihadi John. (and) An image of the terrorist attacker Khairi Saadallah and his three victims who he killed in Reading.

Mr Little said: “There were injuries to both hands that are consistent with defensive injuries. In other words Sir David Amess struggling to defend himself.  Instinct takes over which includes holding out a hand to try to grab hold of a knife. Given there was complete penetration of the bony aspects of three ribs, the degree of force involved in the assault was estimated as ‘at or approaching severe’.”

The cause of death to be multiple stab wounds to the chest.

The defendant was then taken to the police station, Tom Little told the Old Bailey.

He said: “During the booking in procedure the arresting officers were asked by the custody assistant the standard questions as to whether the arrest was ‘domestic or hate related’. Before the police could answer the defendant took the initiative and said ‘Terror’ and ‘Religious’. Let us just think about that for a minute. Terror and religious. In other words it was murder to further religious purposes.

“That itself is terrorism as the defendant well knew.”

Police recovered the following items from the scene:

The rucksack also contained a leaflet, a Koran and a book entitled ‘Fortress of the Muslim’. Blood from the knife matched that of Sir David Amess, and blood on Ali also matched the MP’s.