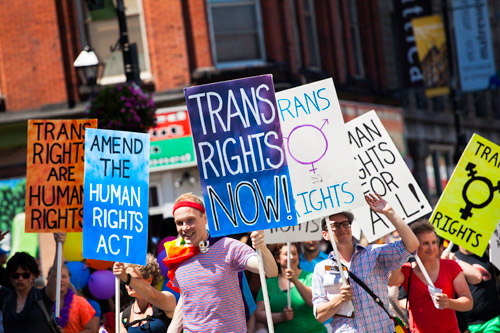 Here are two representative recent items on the topic of “LGBT identity.”

First, The Federalist on June 2 ran an article about the “New Gay Left” in which Christopher Bedford lamented that the old gay pride movement, which pleaded, reasonably enough, “for inclusion, acceptance, and self-esteem,” has been replaced by an aggressive, off-putting push centered on “trans kids,” “pregnant men,” and other far-out notions that offend “a lot of people who have no problem with ‘gay rights,’ as they thought they understood them.”

Second, at the Legal Insurrection website, a June 4 post reports on a study by University of London professor Eric Kaufman showing “homosexual behavior . . . has grown much less rapidly” in recent years than “LGBT identification . . . Whereas in 2008 attitudes and behavior were similar, by 2021 LGBT identification was running at twice the rate of LGBT sexual behavior.” Kaufman concludes that the “LGBT surge is socio-political, heavily siloed among very liberal young people.”

But at the heart of both of these pieces is a semantic problem and it’s very widespread. Bedford accepts the idea that the movement now focused on “trans kids” and “pregnant men” has something to do with gays or gay rights. It doesn’t. Kaufman, for his part, thinks that “LGBT identification” has some connection to “homosexual behavior.” Again, no.

I’m not blaming these writers for making this mistake. They’ve been lulled into it by the LGBT movement itself—which has sought (very successfully) to mainstream transgender ideology by piggybacking onto the gay rights movement.

In fact, no connection exists between the two. “LGB” of course, stands for lesbians, gays, and bisexuals—that is, people who experience same-sex attraction, a relatively common phenomenon throughout recorded history. “T” stands for transgender people, who (if they are indeed trans people, and not callow teens jumping on a trend) suffer from a vanishingly rare affliction called gender dysphoria that afflicts 1 in 30,000 to 110,000 individuals.

In addition to the fact that gays far more plentiful than (genuine) transgender people, they’re also about entirely different things. Their histories are entirely different, too. Beginning in the 20th century, people with gender dysphoria could undergo treatments to make them resemble members of the opposite sex. Extremely few in number, and demanding only tolerance, they weren’t seen as presenting a major challenge to societal norms and met little resistance.

That was never the case with gays. Until recently, being gay was a crime nearly everywhere. (It’s still a capital offense in many nations.) In the United States in living memory, gay bars were raided by police. Government employees discovered to be gay were fired unceremoniously. Until the 1980s, gays in most U.S. states could go to prison. In Idaho, the punishment was a life sentence. Not until 2003 were the last of these laws struck down by the Supreme Court. There were never such laws about transsexuals.

The cause of gay rights sought to eliminate those laws. It succeeded. But then came “trans rights.” Which means—what? It means the “right” to compel everyone around you to affirm that, deep down in the core of your being, you’re not—and never have been—a member of your biological sex. To be entitled to this affirmation, you don’t even have to undergo surgery; you need only declare that you’re trans, and—presto!—your entire life record has to be rewritten to indicate that you are and always were a she, not a he (or vice-versa). Otherwise, you’re being denied your “rights.”

It’s all part of an ideology known as transgenderism. Its contention that a man can really be a woman—or the other way around—has no scientific basis. And the “rights”—the demands—that flow from this ideology have no parallel in human history. Yet almost without debate, it’s become an orthodoxy.

How did this happen?

Thirty years ago, the gay rights movement was simply that: the gay rights movement. It never used the letters LGBT, or such more elaborate versions as LGBTQ, LGBTQ+, and LGBTTTQQIAA. In the 1990s, I wrote extensively about gay rights, which I discussed with hundreds of gay men and lesbians around the United States. Never did the subject of trans people or “trans rights” or the LGBT acronym come up.

And then? Everything changed. The gay rights cause gained ground. Leaders at gay rights organizations looked into the future and saw their jobs disappearing. So they transformed the movement, putting trans issues front and center and rebranding themselves as LGBT activists. And the utterly fraudulent assertion that “trans rights”—that is, transgender ideology—had some link to gay rights enabled them to pressure others into affirming that ideology.

In short, they used gays, and our relatively modest quest for equality, to lend an air of legitimacy to the extraordinarily immodest attempt to mainstream transgender ideology—and thereby drastically transform our conception of human identity. They even rewrote the gay rights movement’s history, replacing old references to “gay” (or “gay and lesbian”) people with the neologism “LGBT.”

Most gay people parroted the new term with a shrug. What they didn’t realize at first was that it represented an existential threat to their own identity. After all, if biology has no role in determinating whether one is a man or a woman, then homosexuality—which is all about attraction to one’s own biological sex—is meaningless. It’s becoming more and more clear the reason many parents of effeminate boys and masculine girls are eager to “transition” them is that they’d prefer having a trans child to a gay one. In other words, unhappy parents who a generation ago would’ve enrolled their gay kids in “conversion therapy” with a quack psychotherapist are now having their genitalia butchered.

Then there is the increasingly obvious problem that transgender ideology poses for women. As cases like that of Lia Thomas underscore, the doctrine that a man can instantly become a woman threatens to drive biological women out of women’s sports entirely, as well as to open the doors of women-only spaces—from spas and restrooms to prisons and rape shelters—to men who may or may not really think they’re women.

It’s madness, and I fear it won’t stop until we reach a critical mass of people who—having undergone surgery only to realize they’re not really trans, after all—“detransition” and then sue the pants off the teachers, school counselors, psychotherapists, surgeons, and others who led them astray. I also fear that when the whole misbegotten edifice finally does come crashing down, it’ll take gay men and lesbians down with it—even though the overwhelming majority of us had nothing whatsoever to do with the damn thing.

One thing that could help? Stop saying “LGBT.”