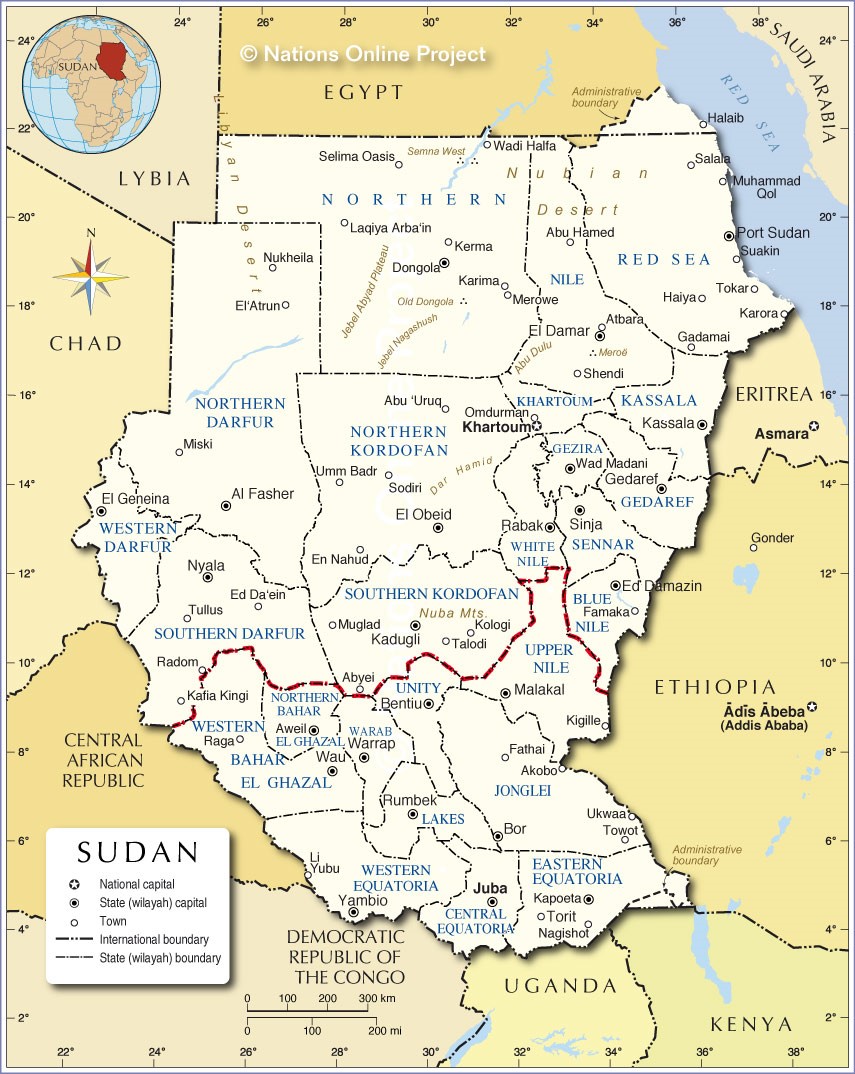 The six-decade civil war in Sudan began in 1956 when the South Sudanese rebelled against the regime in Khartoum rejecting its policies of Islamization and Arabization adopted by the ruling elite. Successive regimes ruling Sudan fought a civil war that killed more than 2 million South Sudanese prior to achieving independence in 2011. Many people thought that the secession of South Sudan would put an end to war in Sudan. Unfortunately, the civil war in Sudan continued with the same strategy and policy of Islamization, Arabization of indigenous population of African origin.

This strategy was adopted in 1881 by Muhammad Ahmad bin Abdallah al Mahdi. He was the first who declared Sudan to be a Caliphate ruled under Sharia law. He wanted Sudan to be fully Arabized and Islamized. The National Islamic Front/NCP Muslim Brotherhood Organization that seized power in 1989 is completing the Mahdi’s unfinished work. Since seizing power in 1989, the Muslim Brotherhood regime began practicing policies of discrimination and oppression against the indigenous population of African origin. These policies include, extermination of indigenous population of African origin, destruction of their cultures, demolition of Christian Churches and restriction of freedom of religion are among the long-term policies of the successive regimes ruled Sudan. The genocide in Darfur, Nuba Mountains and the Blue Nile is the principal objective of the Bashir regime In Khartoum. Another objective is the marginalization of Eastern Sudan and the Nubians.

Since the start of the Darfur crisis in 2003, more than 600,000 people have been killed, and 5 million people of Darfur have been displaced. About 3 million of these people are living in Internally Displaced Camps and several hundreds of thousands were forced to flee to UNHCR refugee camps in adjacent Chad and the CAR.

Darfur is located in the Western region of Sudan.

Darfur occupies an important strategic location linking the African sub-Sahara with Sahel Sahara, the Middle East and Europe through the vast Sahara Desert to the Mediterranean Sea and the Atlantic Ocean.

The region is rich with agriculture and animal husbandry. Darfur also has extensive mineral resources such as gold, diamonds, crude oil and uranium.

As President Bashir told President Putin of Russia, Sudan is the “gateway” to the sub-Sahara Africa.  He really meant Darfur.

Based on its important strategic location, the Sudan government makes this region a sanctuary for all extremist and transnational groups that the regime supports.

With the dislodging of ISIS in Syria and Iraq by the US – led coalition and the Libyan National Army intensifying its military operation against Islamic militants in Libya, several Jihadist groups crossed into Sudan between October 2017 and March 2018. The Khartoum regime provided them with sanctuaries and integrated them into its Rapid Support Forces (RSF)/Janjaweed militias.

The strategy of the Bashir Khartoum regime and its Arab Janjaweed militias is to eradicate the indigenous population of the African origin and replace them by bringing Arab tribes and terrorists from abroad with the intention of completing the genocidal project by 2020.  This strategy was revealed in a secret Arab Coalition Plan document that Darfur resistance forces found in an abandoned RSF/Janjaweed militias vehicle in 2014. The Coalition was created in the 1980’s with the support of the late Libyan strongman Gaddafi and Former Prime Minister of Sudan, Sadiq al Mhadi.

The Bashir regime objective is to establish an Islamic Caliphate in the African Sahel region ruled by Sharia with the goal of expanding Arab territory in Africa. If the Arab Coalition Plan is left unchecked by the international community, then RSF/Janjaweed militias will commit more genocidal atrocities in Darfur to complete their evil plan.

To execute this plan, Bashir and his allies created a Project for Development of Wadi Zuruk in North Darfur. They began digging water pumps, constructing a military airfield and building 2000 homes in Goz Sarra. Wadi Zuruk will become a base for training and launching terrorists’ operations in the African Sahel region and possibly in other parts of the African continent. Once Darfur falls into the hands of Islamic extremist groups backed by the Bashir regime and his allies, they can easily overrun the rest of Africa Sahel region.

President Bashir’s RSF/Janjaweed Militias continually commit atrocities against the population of Darfur, particularly in Jebel Marra. Men including young boys are tortured and killed; women including elders and young girls are systematically raped and severely punished. Villages are burned. Farms, crops and fruit plantations are decimated by purposefully grazing of animals in the fields or cutting down of fruit trees. Food stocks are destroyed, farmers are shot and killed.

The Janjaweed militias kidnap people for ransom; commit extrajudicial killings, seizing of properties, pillaging villages, and looting IDPs. The rampaging Janjaweed militias prevent indigenous people from farming which together with animal husbandry constitute the basic economic source of income in the Darfur region. They control all the economic sources in the region leaving the population with nothing to generate income depending instead on international humanitarian assistance.

In response to the Bashir Regime genocide, resistance movements were formed in Darfur and in other parts of the Sudan to defend the indigenous African population and their human rights. It is against this background that the Sudan United Movement (SUM) was founded in 2010 to defend the population against Janjaweed militia attacks, foster regime change and establish a democratic system of government.

The Bashir NIF/NCP Muslim Brotherhood regime continues to commit genocide against the people of Darfur, the Nuba Mountains and Blue Nile regions of Sudan.  For over 60 years the successive Arab-ruled regimes in Sudan have been committing genocide against the Sudanese people in the name of fighting rebellion. Humanitarian and military assistance is needed to stop the Bashir regime from concluding the Arab Coalition Plan goal – the ethnic cleansing of all indigenous African people by 2020.

[i] Lt. Gen. Abdallah is Chairman of the Sudan Unity Movement (SUM). He is a native of North Darfur who joined the Sudan People’s Liberation Army (SPLA) in 1984 and became active in the Nuba Hills and Darfurians resistance movements. In 1989 he joined the Patriotic Salvation Movement in neighboring Chad based in Darfur. He served as an officer in the Chadian army for 23 years. He held senior intelligence and counterterrorism posts including as Coordinator of the Multi-National Joint Task Force of Nigeria, Chad and Niger. He was Coordinator of Pan-Sahel Initiative (PSI) Anti-Terrorism Unit of Chad and Commander of PSI Anti-Terrorism Battalion of Chad 2004. He is a December 2002 graduate of the Intelligence Officers’ Advanced and Combating Terrorism Courses, US Army Intelligence Center and Schools, Fort Huachuca, Arizona. He was a Counter Terrorism Fellow and a Graduate of the College of International Security Affairs, National Defense University, Washington, DC, 2005. He was an International Fellow and Graduate of the US Army War College, Class of 2008. He was Graduate of Nigeria Armed Forces Command and Staff College Course 22, of the year 2000.  He is the co-author of Jihad in Sudan: Caliphate Threatens Africa and the World, JAD Publishing, September 2017.