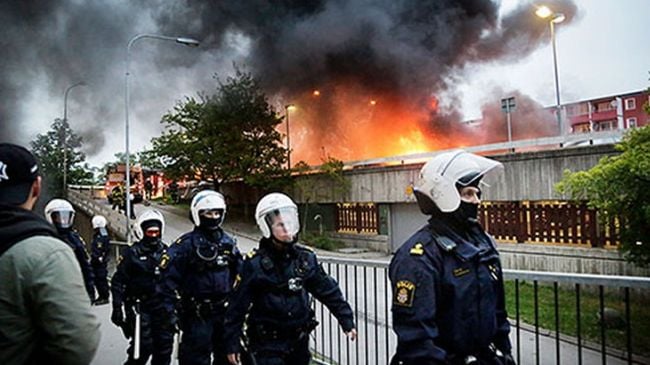 In olden days good authors once used accurate language, now anything goes. It is no secret that President Donald Trump watches TV news and sometimes issues confusing statements based on information from programs he sees. At his campaign style rally in Melbourne, Florida on February 18, 2017, speaking on the issue of immigration, he elaborated on remarks he had heard in a Fox News program. Trump’s own comment was veiled and nebulous, “You look what’s happening last night in Sweden…who would believe this?… they took in large numbers, they are having problems like they never thought possible.”

The implication was that some terrorist attack had happened as did occur in Germany in the recent past or some serious crime had been committed by some of the Muslim migrants into the country, now, according to some estimates, numbering about 450,000  or 5% of the total population.

The problem for the baffled news media and others was that nothing momentous happened in Sweden on February 17 to which attention should be drawn. Sherlock Holmes solved one of his cases because nothing happened: the dog did not bark. Trump was mistaken about the facts but inadvertently he drew attention to a growing problem in Sweden, and indeed in other Scandinavian countries, of Muslim immigration.

The mystery was soon solved. Listening to the Fox News program, the Tucker Carlson program, President Trump had heard an interview with Ami Horowitz, a young American filmmaker, who was discussing the increasing social problems in Sweden, including the rise in crime caused since the admission of migrants into the country. Horowitz is a brilliant filmmaker, part serious, part ironic and deliberately provocative, whose satirizing of official organizations and people has been devastating. His film of the United Nations, U.N.Me, commenting on the misbehavior of its peacekeeping forces in war zones, its lax officials, and its choice of the then bitterly antisemitic Iranian President Mahmoud Ahmadinejad, eager to eliminate the State of Israel, as the keynote speaker at the 2009 anti-racism conference this revealing the moral blindness as well as the incompetence of the UN.

Horowitz may have exaggerated when he indicated there were 30-40 no go zones in Sweden where even the police are afraid to go. But his comments on the rise in crime and sexual assaults, and the changes in Sweden on refugee policy and admission of migrants which influenced Trump, were on target.

Migrants have affected Swedish politics. Over the last 15 years, Sweden with a population of 9.8 million, has admitted 650,000 asylum seekers. In 2015 more than 160,000 applied for asylum. Of these, 50,000 came from Syria, 40,000 from Afghanistan, and 20,000 from Iraq. In 2016, the number of applications dropped to 29,000 for a number of reasons. Largely this was due to increased border controls, including those over the Oresund bridge and tunnel link to Copenhagen, only 20 miles away, to the EU-Turkey agreement, and to new controls. Sweden has begun, starting in 2015, to introduce limits on those seeking asylum, such as ID checks on transport, airline, trains, buses, and ferries, more temporary border controls and legislation. People must be able to prove their identity.

Horowitz was not alone in stating the reality. In January 2017 the police chief of Malmo, the third largest city in Sweden, a city of 300,00 in which a quarter of the population is Muslim, warned of the increase in attempted murders and rapes. This is a notorious city. In 2016 it experienced 52 hand grenade attacks. It has also been the setting for serious anti-Semitic demonstrations by the Muslim population.

The unpleasant atmosphere reached a point that led a prominent Danish film actor, Kim Bodnia who is Jewish, to make a public statement. He played the role of a Danish detective in the popular Danish-Swedish TV series, The Bridge. He left the show which is set in Malmo because of the extent of antisemitic prejudice.

Meanwhile the Muslim population, once welcome has been treated generously with financial help, in housing, education, and cash benefits, but only a small number are fully employed.

What is disturbing in this unequal treatment and concern is that the small Jewish community once 700, whose center in the city is now heavily fortified, received no protection from Ilmar Reepalu, the left wing mayor for 15 years, who persisted in denying the obvious incidents including graffiti on the walls in public places. The reality is that a number of Jewish families left the city, and those that remain are reluctant to wear any sign of Jewish identity, such as a kipah, skull cap.

Meanwhile, over 300 Muslims also left Sweden. They went to join and fight for ISIS.

The Swedish political dialogue and landscape is changing in similar fashion to other European countries where far right parties including those in Denmark and Finland have emerged. There is more concern with Swedish culture and immigration, and a rise in anti-migrant sentiment. A significant illustration is shown in current public opinion polls. They show the far right Sweden Democrat party is currently the most popular political party in the country, supported by 25.2% compared with the ruling Social Democrats, 23.4%, and the center-right Moderates 1%. Some subway stations in Stockholm display anti-immigration signs, “Sorry about the mess here in Sweden.”

The rapid rise in support for the nationalist, populist, and strongly anti-immigrant SD is the response to the social changes. Led by Jimmie Akerson, the party first gained seats in the Riksdag, the Swedish parliament, in 2010, gaining 20 seats and 5.7% of the vote. At the last election in 2014, it gained 49 seats and 12.9% of the vote.

Fears have been expressed in Sweden of increasing social unrest and perhaps of terrorist attacks as in France and Belgium. It is not clear if the accusations that Swedish officials are deliberately covering up the extent of the crimes in the country to protect the Muslim migrants, are justified. What is clear is that Trump was mistaken on the details of events or non-events, but that he touched a raw nerve that needs treatment. For this is he likely to receive the Nobel Prize from the Swedish monarch?