From the Daily Mail and the German edition of The Local 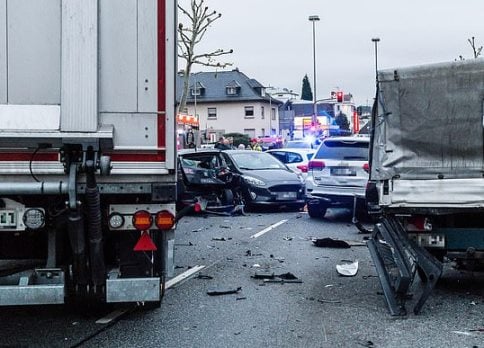 A stolen truck ploughed into nine cars and left seven people injured in hospital in a suspected terror attack in Germany on Monday evening. The white Mercedes lorry slammed into cars waiting at a traffic light opposite the main railway station in Limburg and crushed them together.

Today it was revealed the suspect is a 32-year-old Syrian man who shouted ‘Allah’ as he was arrested, according to local media. It is believed the man was previously known to police for dangerous bodily harm, drug possession, groping a 16-year-old girl (sounds about right) and shoplifting but not extremism, according to Bild.

Public broadcaster ZDF quoted security authorities as saying they believed the incident had a “terrorist backdrop”, but the prosecutor’s office in Frankfurt declined to confirm this.

The original driver of the truck, who was not named, was quoted by daily Frankfurter Neue Presse (FNP) as saying a man had “dragged” him out of his lorry. He said the man, with short dark hair and a full beard, had yanked open the driver-side door and stared at him wide-eyed before forcing him out of thevehicle. “I asked him ‘What do you want from me?’,” he told FNP. “He didn’t say a word.”

Bettina Yeisley from Limburg, whose office is next to the scene of the  crash, told FNP she heard a loud bang and ran out onto the street with colleagues. They found the driver sitting by the roadside. . . passers-by said the driver said ‘Allah’ several times” and spoke Arabic, FNP reported.

“He was bleeding from the nose, his hands were bloody, his trousers torn. He said that everything hurt. I asked him his name and he said, ‘My name is Mohammed’.”

Authorities urged users of social media not to jump to conclusions about the motive.

“We are not ruling anything out,” a spokesman for the state police force told DPA. “But we call on you: don’t take part in speculation!” the regional police wrote in several tweets.