From Reuters, the Age and AFP via Channel TV of Nigeria

KABUL, Nov 11 (Reuters) – Afghan women will no longer be allowed in parks, a spokesperson for the Taliban’s morality ministry said, in part because they had not been meeting its interpretation of Islamic attire during their visits.

“For the last 14 or 15 months we were trying to provide an environment according to Sharia (Islamic law) and our culture for women to go to the parks,” he said. He claimed the Taliban had “tried its best” over the past 15 months to avoid closing parks and gyms for women, ordering separate days of the week for male and female access or imposing gender segregation. “Unfortunately, the owners of parks didn’t co-operate with us very well, and also the women didn’t observe hijab as was suggested. For now, the decision has been taken that they are banned,” 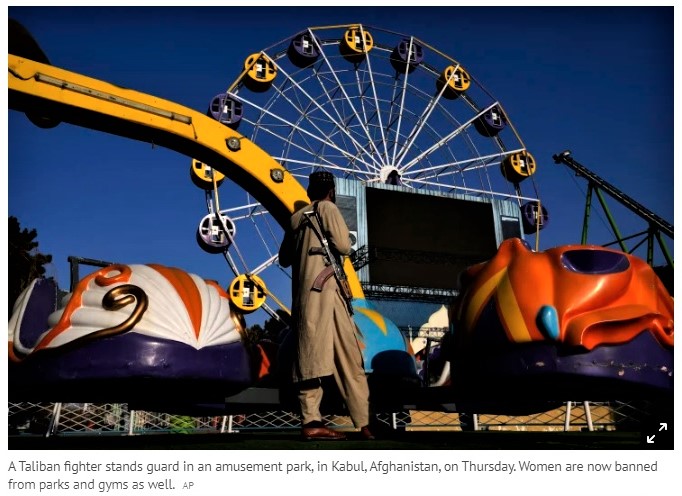 It was not clear how long the park restrictions would last and whether they would be extended across Afghanistan. Taliban teams would begin monitoring establishments to check if women were still using them, he said.

A female personal trainer said women and men were not exercising or training together at the Kabul gym where she works. “The Taliban are lying,” she insisted, speaking on condition of anonymity, fearing reprisals. “We were training separately.”

Kabul-based women’s rights activist Sodaba Nazhand said the bans on gyms, parks, work, and school would leave many women wondering what was left for them in Afghanistan. “It is not just a restriction for women, but also for children,” she said. “Children go to a park with their mothers, now children are also prevented from going to the park. It’s so sad and unfair.”

At a Kabul amusement park containing rides such as bumper cars and a Ferris wheel, Reuters witnesses saw several women being turned away by park officials, with Taliban agents present observing the situation. Masooma, a Kabul resident who asked that only her first name be published for security reasons and said that she had been turned away with her grandchild, added: “When a mother comes with their children, they must be allowed to enter the park, because these children haven’t seen anything good … they must play and be entertained.”

Thirteen-year-old Zainab should have been shopping for a new school uniform this autumn but, with no prospect of girls’ schools reopening in Afghanistan, she was instead forced to pick out a wedding dress. 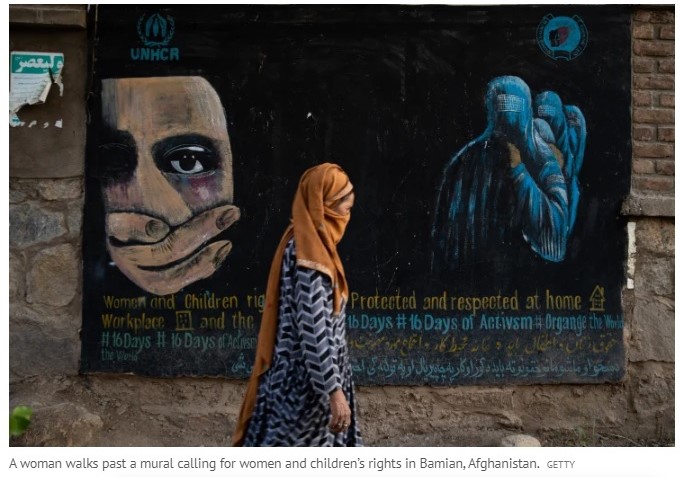 Since the Taliban seized power in Kabul and banned teenage girls from education, many have been married off — often to much older men of their father’s choice.

“I cried a lot and kept telling my father that the Taliban would reopen girls’ schools,” Zainab said. “But he said that’s not going to happen, and it’s better that I get married rather than sit idle at home.”

Parents increasingly feel there is no future for girls in Afghanistan, said Mohammad Mashal, the head of a teachers’ association in the western city of Herat. “They feel it is better girls get married and start a new life,” he said.

A planned reopening of girls’ schools in March by the ministry of education was axed by the secretive supreme leader Hibatullah Akhundzada. Officials claim the ban is temporary but have wheeled out a litany of excuses for the closures.

For many girls, it is already too late. A team of AFP journalists interviewed several girls who have either married or become engaged in recent months. Their real names are withheld for their safety.

“Never did I think I would have to stop studying and instead become a housewife,” said 16-year-old Maryam. “Instead of studying, I now wash dishes, wash clothes and mop the floor. All this is so hard,” she said as she served breakfast to her father Abdul Qadir, 45. Qadir had intended to let Maryam and her sisters study for degrees before searching for suitors.

“In Afghanistan, girls do not get many opportunities, and proposals for marriage stop coming after a time,” he said. “My previous experience of the Taliban tells me they will not reverse their decision.”

Even if a reversal of policy was to come, it would be meaningless to Maryam. “The first person to oppose my education will be my husband. He will be physically violent with me,”

Sisters Sara, 20, and Fatima, 19, had been months away from sitting university entrance exams when their high school was closed, leaving them unable to graduate. With the family in crisis after their father died from Covid-19, they declared one after the other that the search for husbands should begin. “My conscience tells me that it’s better to marry than be a burden on my family,” Fatima said.