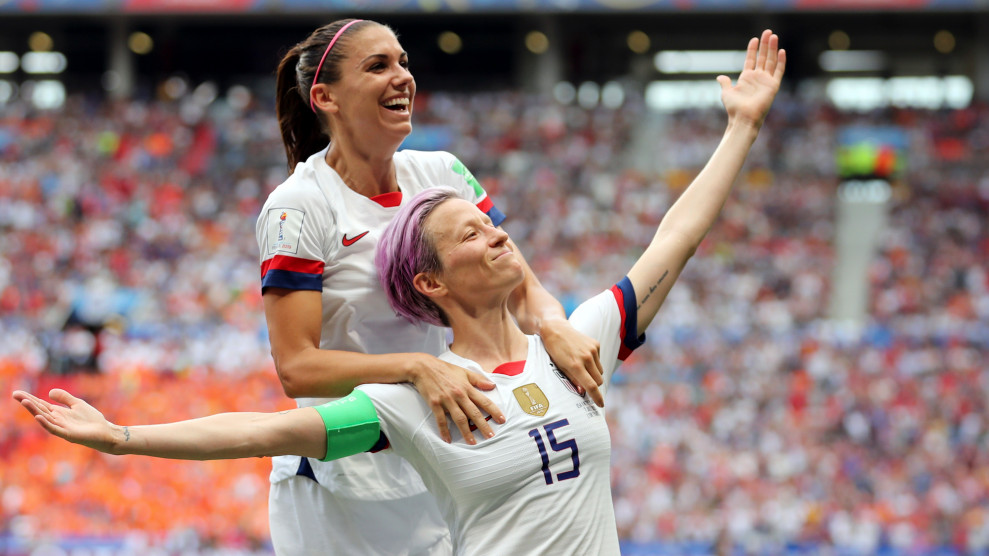 The United States has got the world on a string, every time the Women’s World Cup team plays in international tournaments. Its standard of excellence, not remote from arrogance, was displayed once again on July 7, 2019 when it won the FIFA World Cup with a 2-0 victory over the Netherlands in Lyon, France. The U.S. team can justifiably claim to be the greatest national team in the world, yet if it is widely admired it does not suffer from a surfeit of affection, due to its controversial lack of restraint in celebrations of success and victory, and choreographed routines. A champion of those routines is the forward and co-chair of the team, Megan Rapinoe.

For a peace loving man, President Donald Trump is involved in a number of conflicts, especially the tariff war. Now he is at odds with Rapinoe, the supernova of the constellation of stars in the U.S. Women’s team, who he said disrespects the country, the White House, and the flag. Rapinoe has all the qualities that Trump exhibits: brashness, arrogance, self-celebratory, a prima donna concentrating on victory, articulate in locker room language. She implements her views and personality, comfortable in being gay, the first white professional athlete to kneel at an international game in Thailand on September 15, 2016 during the playing of the national anthem, a refusal to sing when the Star Spangled Banner is played. She now stands silently with her arms at her sides while the anthem is played.

Rapinoe, a 34 year old professional soccer player, gold medalist, and business woman with her own clothing line, is undoubtedly a highly gifted athlete. In the current FIFA tournament, she scored four goals in two games, before breaking the scoreless tie in the final game by scoring a penalty, giving the U.S. a lead that it never lost. No shrinking violet, Rapinoe also expressed her feminist point of view, valuable for the 1.6 million registered female soccer players. She attacked FIFA over both its World Cup schedule, and gender inequality. On the first issue, FIFA had scheduled the men’s final of the South and North American Confederation on the same day as the Women’s World Cup Final.

Men’s soccer has had exemplary figures. Standing out are the Brazilian Pele, who many observers view as the greatest player of the game, and British David Beckham. Pele scored 1281 goals in 1363 games, 650 in 694 league games averaging almost a goal in every game, becoming a national hero. Beckham, the first Englishman to win league titles in four countries, also won 19 major trophies. A great midfielder, captain of the English international team on 59 occasions, he is a cultural celebrity, whose experiments with different hair styles have been widely copied. He appears close to the Royal family, attended the weddings of both Prince William, and Prince Harry, and met the Queen Elizabeth II at Buckingham Palace.

But generally, in spite of the heroes mentioned, men’s soccer has often been a war like game, with some fans of the clubs engaged in disorderly, violent behavior, and hooliganism. The clashes exemplify differences in and between societies, perhaps religious, national, class, territorial, or sheer animosity. They are expressed in banners, effigies, and songs, and in occasional battles and vandalism. Violence in men’s soccer games has occurred all over the world, and hundreds of people have died, in African countries, Egypt, Brazil , Belgium, Mexico City, Russia, and Bradford, England.

Within countries, long standing rivalries with other men’s clubs have existed, and some games between them have caused casualties. The traditional hostility in Glasgow, Scotland between Celtics and Rangers prevails, and is embodied in Scottish culture, reflecting divisions in the country. Similar friction is true of Serbia and the Netherlands, In Serbia, fierce rivalries have long existed between Red Star Belgrade and local city Partizan. Red Star extremists, the Delije (heroes), the most organized hooligans, plot attacks on rivals at home and abroad. But at the game on March 22, 1992, Serb paramilitary in full uniform marched in the stadium, demonstrating against Croatia.

Netherlands has the rivalry between two teams, Ajax, Amsterdam, liberal, the most successful club in the country, and Rotterdam Feyenoord, considered to be far right, the most serious clash taking place in 1997. At various times, the rivalry has seen home-made bombs, attacks on players, vicious chants, and violence. In France there has been long rivalry between PSG (Paris and Northern France) and Olympique de Marseille (South of France), and some games have witnessed violence.

The Rotterdam Feyenoord in February 2015 attacked Italian police near the Spanish Steps in Rome with glass bottles and firecrackers before a Europa League match with Italian Roma. The French PSG played the Turkish Galatasaray team in Paris in 2001, and 50 people were injured.

The brief visit of the Moscow Dynamo football team to England in 1945, and the matches between Dynamo and various British clubs led to considerable bad feeling. Violence also broke out in Moscow in June 2002 following the defeat of Russia, 1-0, by host Japan in the World Cup.

Probably the most serious example of soccer violence was on May 29, 1985 at the Heysel Stadium in Brussels. Fans of the English club Liverpool rioted in the game against Juventus. Turin,  causing the death of 39 and injuring hundreds. FIFA as a result, banned British teams from all European competitions for five years.

Arguably, Megan Rapinoe, who won the Golden Boot in Lyon, is the best women’s soccer player on the planet. She has also been an advocate for women being treated as equal to men in the soccer game. Unlike most women soccer players who keep politics separate from their behavior at games, she has taken political positions while remaining a superb athlete. The interesting question now is how she will respond to the invitation of President Trump to visit the White House to celebrate the victory of the Women’s Team. Rapinoe has previously said that “I’m not going to the f…g  White House,” if she did get an invitation. She, together with Trump, has the opportunity to reconsider. Jaw, jaw, as Winston Churchill is alleged to have said, is better than war.

Prev‘Woolwich Boy’ drug gangster is identified as fourth ISIS terrorist who boasted about killing Brits and Americans on phone video
On the subject of the US women’s football team.Next