The ‘intolerance and animosity’ that Muslims exhibit toward non-Muslims is not new — it’s 1,400 years old 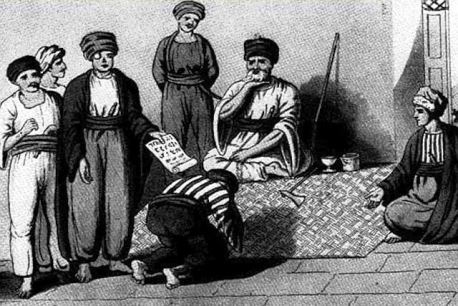 The Palestinian Christian Bishara Bahbah paints a grim picture of the lot of Christians in Hamas-ruled Gaza, but at the same time he misleadingly describes a pollyannish version of how Palestinian Christians live in the PA-ruled parts of the West Bank. In this version, Christians get along swimmingly with their Muslim “friends and neighbors.” The truth is very different.

Who, reading this list, thinks that in today’s “Palestine” (i.e., Gaza and P.A. territories), the Pact of Umar “primarily represents the commitment of Muslims to respect and protect the religious and property rights of Christians and Jews”? It’s a list that puts the Christians firmly in their permanently inferior place, where they must strictly adhere to dozens of rules that stress their inferiority to Muslims, or if not, they lose their security, which can mean they may be killed. Of course, most of these restrictions are no longer imposed, but the atmospherics they created long ago – that is, an attitude of Muslim contempt for Christians that has lasted as long as Islam itself – remains, and explains why Christians in Muslim lands are never treated as equals, but subject still to a host of disabilities and threats. Think of how Christians in Pakistan, in Nigeria, in Egypt, in Iran all live in fear of Muslim neighbors. And how could Muslim attitudes be different, given that the Qur’an teaches them that they are “the best of peoples” (3:110) while non-Muslims are “the most vile of created beings.”?

I recall when I was growing up in the Old City of Jerusalem, Ramadan was one of our favorite holidays. We shared food with our Muslim neighbors; we watched the best Arabic soap operas together; and we loved to hear the voice of the Mussaher, the person who goes around before sunrise to wake people up to have their meal before the fast begins. And I remember the good wishes of our Muslim friends and neighbors when we celebrated Christmas.

Bishara Bahbah may have fond childhood memories of growing up in a mixed neighborhood, where the Christians shared Ramadan meals with Muslims and Muslims offered “good wishes” at Christmas to their Christian friends, but he makes too much of this. Such anecdotal evidence proves only that some Muslims he knew were willing to violate the Qur’anic injunction against taking Christians as friends, and the rule that they not recognize – even in a greeting – the religious holidays of Infidels. But he surely knows there are hundreds of millions of Muslims who would not be so accommodating, and it is they, not those childhood “Muslim friends and neighbors” who offered good wishes at Christmas, who are islamically correct.

Hamas, to you I say, we Palestinian Christians have always been an integral part of Palestinian society. We are part and parcel of the fabric of the country. We love our land and nation more than you ever will. You serve a foreign power, Iran, smuggling in useless arms and firing them at your masters’ command.’’

Your bigoted attitude toward Palestinian Christians disqualifies you as a legitimate political party in Palestinian politics. Your zealotry brought intolerance and animosity among our people. Come what may, we will liberate the people of Gaza – both Muslims and Christians – from your despotic clutches. Those who supported you shall be cast out as traitors and racist collaborators. You have lost all semblance of legitimacy in the eyes of the Palestinian people and the world. You represent no one but your pitiful selves.

It is a shame there is no land bridge between the West Bank and Gaza that would allow Palestinian security forces to march into Gaza and forcibly rid it of the cancer called Hamas. And those who support and finance you and those who train you and harbor your leaders are as guilty as you are.

Let it be a lesson to anyone who tries to insult, marginalize or belittle Palestinian Christians, whether from within or from outside: The day will come when Palestinians – Muslims and Christians and many people around the world – will rid Gaza from you and your tyranny.

It pleases Bishara Bahbah to believe that it is only Hamas in Gaza that has managed to spoil the warm relations between Palestinian Christians and Muslims. The “intolerance and animosity” that Muslims exhibit toward non-Muslims is not new — it’s 1,400 years old. His fantastical belief – assuming he really has convinced himself of this — that Palestinian Muslims and Christians have always gotten along swimmingly until Hamas came along to spoil, in Gaza, that historic harmony, is false. There are many facts that tell a different tale of Christian-Muslim relations.

Here are some of those facts:

Tulkarm had a community of 2,000 Christians 30 years ago; it now numbers 12 families. “We are preparing to move abroad to a place where we can live a better life as said Reverend Dahoud Dimitry, head of Tulkarm’s Saint George Greek Orthodox Church, which was burned to the ground in the September 2006 riots following the publications of the Muhammad cartoons in Danish newspapers.

The Christian population of Bethlehem has fallen to 14% of the population, from 85% in the1950s, to 40% in 1997, to 14% today.Christians in that city still have not forgotten the siege of the 1,400-year-old Church of the Nativity, the birthplace of Jesus, by 100 militiamen loyal to PA Chairman Yasser Arafat in 2002. The Muslim terrorists held dozens of Christians hostage, including priests and nuns, desecrated bibles, emptied the church coffers, and lit sections of the centuries-old church on fire. The former mayor of the city, Hanna Nasser, has bluntly predicted that “There is no future for Christians in Bethlehem.”

Even in Ramallah, which is considered the most liberal city under Palestinian control, threats against Christians are commonplace. Pastor Isa Bajalia, an evangelical Arab-American pastor, who had been living in Ramallah since 1991 with his wife and son, was threatened repeatedly by a Fatah security official from the Tanzim militia. The official demanded $30,000 for protection. As a result of the threats, Bajalia was forced to flee to Jerusalem, where he lives safely under Israeli rule.

Relations between Palestinian Christians and Muslims – despite what Bishara Bahbah wants us to believe, have steadily deteriorated not just in Gaza, but also under PA rule.

Bahbah is correct in maintaining that the situation for Christians in Gaza has been especially precarious since Hamas took control in January 2006, with the imposition of shari’ah, or Islamic, law. Attacks against Christians have become commonplace. There have been several bomb attacks on churches and on the Zahwa Rosary School outside Gaza City. But he ought to have admitted as well that in the PA territories, and all over the Muslim world, the position of Christians is difficult, precarious, and in some places, intolerable.

Had Bishara Bahbah dared to tell the truth, he would have written something like this:

“I remember from my childhood getting on well with my Muslim neighbors in Jerusalem. Fortunately they were from tolerant families, that refused to follow the Qur’anic commands about not befriending Christians or Jews. I was lucky, for there certainly are many Muslims who are not so tolerant, as is evident from the threats and attacks on pastors, churches, and individual Christians all over the PA-ruled territories and, even more frequently, in Gaza. And in every single community where there are Christians – in Nablus, Tulkarm, Taubus, Ramallah, and especially, in Bethlehem, their numbers have steadily declined, irrefutable evidence of the harassment and persecution they have suffered.

“It is true, however, that if the conditions for Christians in the West Bank are bad, they are much worse in Hamas-ruled Gaza. 5,000 Christians in 2006 are down to 750 today. Shari’a has been imposed. Christian churches and at least one Christian school have been bombed. In a few years there will be no Christians left in Gaza, testimony to what they have had to endure and that led all of them, eventually, to flee. Some of them go abroad, to Canada or Australia. Some find refuge in Israel, which is the one place in the Middle East where Christians can freely practice their religion and have their safety guaranteed by the government.”

That’s what Bishara Bahbah ought to have written. But could he ever have allowed himself to deliver such truths? Don’t be silly.