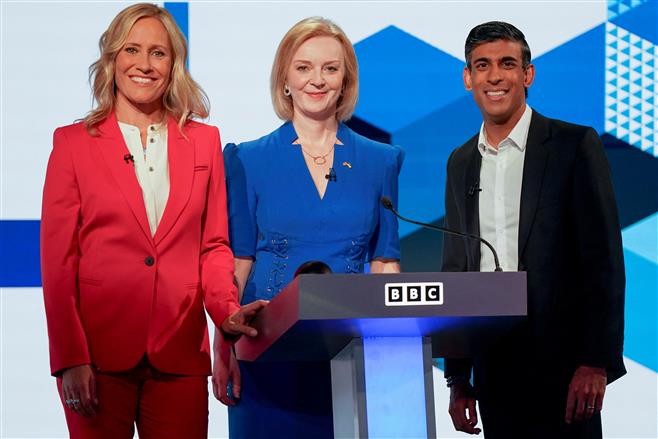 Britain is now engaged on what purports to be a great national debate.

The two candidates who have survived the party’s shoot-out have gone on to TV debate, with hustings to follow across the land.  Journalists will speak truth to power, as is their wont, and the people will watch the contest with the same attention they give to women’s football (both codes).  The command decision passed down to the media, the behest of our rulers, is that the nation has to believe in this simulation of election.  Nothing of this is real.

The contest is already over.  Sunak admits that he is the ‘underdog’, which is breaking the news gently to his followers, and the bookmakers confirm this.  The election is not open to the people at large, a great sadness to the media.  It is confined to the paid-up members of the Conservative Party, now assessed at 180,000, who are voting by post and in many cases have already done so.  The party is not hesitating to make up its mind, it is sending off its ballot papers while it still can (for many are elderly).  We were told in the media that there is a nation-wide preference for Sunak and his tax-keeping agenda.  Well, tough. The people are not about to be consulted, whatever the strong support for high taxes among its many beneficiaries.  The myth that high taxes are unpopular does not survive scrutiny.  So Liz Truss is the standard-bearer for holding back the State, and the taxes planned by Rishi Sunak.  The Conservative members, less enchanted by high taxation, fear above all the dread words: wealth tax.  It is their call, and they have made it.

The debates are a charade designed to fill TV time, and to persuade the public that a great national decision has to be made and they are part of it.  The Monday debate between Rishi Sunak was less than edifying.  I scored the combatants about equal on points but on behaviour (I refuse to cater to the now-fashionable ‘behaviours’) Sunak was simply loutish, constantly interrupting Truss and shouting over her. He had obviously been told to be aggressiv, and went the way of ‘toxic masculinity’.  Truss, very wisely, kept her cool and refused to be drawn into a brawl.  As always, the Press let bad behaviour off lightly, but the Conservative members who had been brought up on good manners will exact their own judgment.  The letters to the Telegraph, who act as a Greek chorus, have condemned Rishi for ungentlemanly conduct, and there is no appeal.

The stars in their courses fight for Liz Truss.  The TV debate on Tuesday had a sensational event: the host, Kate McCann, fainted after half an hour.  As luck would have it, the camera was on Liz at the moment, and she registered shocked concern while mouthing ‘O.M.G.’

She then (we are told) went over to hold the hand of the stricken Kate, who has later said that she is ‘just fine’.  Rishi also went over, but the screen had gone blank.

All this is heavy, black emphasis for the downfall of Rishi Sunak.  He has already gone back on one of his tax threats and may well recourse to that mannered word ‘resile’.  .  Much of the public is in no position to pay the dues it already owes and cannot conceivably meet new exactions.  Over then to Liz Truss, who has a radical new policy of easing the tax burden to promote growth.  We have no beliefs left but the national psychodrama remains gripping.

PrevThe National Tragedy of Hunter Biden’s Laptop
This Just In: Times Scribe Admits He Was Wrong About Trump VotersNext