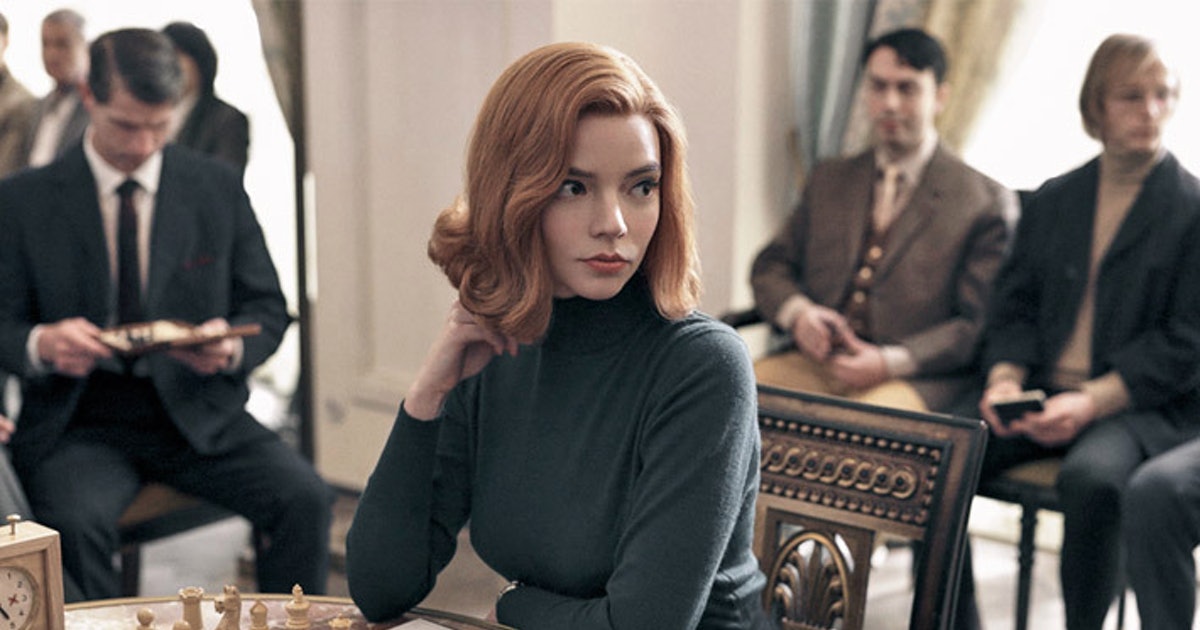 Netflix has produced a seven episode limited TV series The Queen’s Gambit, featuring a serious treatment of the game of chess, which has become extraordinarily and unexpectedly successful. Released in October 2020, estimates are that over 70 million people across cultures, ages, and languages watched it in a single month. The series has sparked a boom in the game of chess and stores have been bombarded by demands for chess sets. The present excitement resembles the furor in 1972 when Bobby Fischer defeated the Boris Spassky of the Soviet Union in Reykjavik, Iceland to become the world’s chess champion, the first American to do so. It is compelling to watch genius at work.

Apart from the appeal of the brilliant TV production, a remarkable mélange, intimate and emotional yet cerebral, it is likely that the success of the series is reminiscent of present difficulties, the impact of the Covid-19 pandemic causing the necessary lockdowns in the U.S. and elsewhere allowing the time available to watch it. But more important, it provides a positive image of ability to deal with and overcome difficulties caused by the virus, and can be viewed as wish fulfillment for a final triumph over the handicaps people are experiencing in this era of the pandemic.

The story in the series of QG offers a double picture, the image of a classical fairy tale of a girl transformed into a princess, and a sports story of competition through determination in spite of obstacles and sometimes self-destructive behavior.  In this latter respect it recalls, if remotely, the sports drama of another underdog facing challenges, boxer Rocky Bilboa, the poor, uneducated character who fights his way to the pinnacle, his destiny the world’s heavy weight championship.

The QG, appealing to both men and women, is a strategic triumph, with its tale of an individual overcoming handicaps to achieve success. The very end of the series is symbolic of this triumph with the behavior of the defeated chess world champion Vasily Borgov. He says to his challenger Beth Harmon, “it’s your game,” and instead of upsetting, as is the custom, his chess king on the side on the set he gives it to her. For her part, Beth, at the end, wears an all-white outfit symbolizing the transformation from the once orphaned nine year old into the queen.

The series is compelling in many ways. It is authentic in background, clothes, hair, costume designs, and its stunning visuals of the details of life. It is also realistic in its offhand references to the game of chess, among them  the Sicilian Defense, Najidorf, Rossolino, and Caro-Kann, and to personalities such as Jose Capablanca. It is most telling in the portrait of Beth Harmon, a flawed person, complex, stubborn, but one who is brilliant, highly disciplined as well as having a natural talent for the game of chess which she quickly learns. In spite of handicaps she does not suffer from self-pity, but takes responsibility for her life and has a positive self-concept.

The story of QG is of a young woman, an orphan in a home who at age nine reveals a talent for chess, becomes absorbed and driven by it and begins an unlikely ascent to stardom. She is also autistic, and becomes addicted to and dependent on tranquillizer pills and alcohol, as well as having emotional problems, anxious and emotionally inhibited, partly because of memories of her biological mother who died in a car crash.

It is an uplifting story, the account of a female underdog fighting against the odds and succeeding  in a man’s world. Self-confident, she exists and is considered in that world as “Harmon” rather than as “Beth,” the only woman in a sphere almost confined to men at a senior level.

She disproves of the saying of the orphanage janitor, Mr. Shaibel, who was her chess mentor in his murky basement, who told her that girls do not play chess, although he became a kind of surrogate parent. Shaibel had repeated the remark, since disavowed, of chess champion Garry Kasparov in 1989  “chess does not fit women properly.” At no point does Beth think her gender is a disadvantage. At the same time, the script, perhaps in deference to concern over racism, indicates that the character of Jolene, African-American, rebellious teenager at the orphanage was Beth’s closest friend.

The  portrait of Beth is instructive in a number of ways. It portrays a person totally dedicated to the game, one who does not rely on intuition, works hard, is disciplined, studies her chess opponents and their games, rehearses her own games and going over the mistakes she believes she made in her few losses. Beth lives in an entire world of just 64 squares.

Above all, QG appeals as an example of an individual overcoming obstacles and  finding a way to get over them and reach a successful conclusion. At the end of the story she forgoes her pills and liquor, and is able to win while completely sober and to see the fictional chessboard on the ceiling without drugs. She is now fully self- confident and in charge of her own destiny. Implicitly for us today, it indicates a path to overcome some of the obstacles of the pandemic.

The story and the denouement is appealing, even more because of the brilliant production and acting, especially the stunning and memorable performance of Anya Taylor-Joy as Beth.

Yet it can also be seen as an up to date version of a standard romantic trope, the voyage of a poor handicapped person overcoming obstacles. In well-known fiction a parallel figure might be the eponymous heroine of Jane Eyre, Charlotte Bronte’s 1847 Bildungsroman of the growth of a poor girl, an orphan, lonely, abused person suffering privations and obstacles, but a strong person of independent spirit who has a happy, if bitter sweet, ending.

The success in Beth’s life in  QG evokes memories of admired figures, those who have conquered handicaps to achieve fame. One can note two of the many. Helen Keller, born on a homestead in Tuscumbia. Alabama, author, political activist, who lived “at sea in a dense fog,” was the first deaf-blind person to earn a college BA. Abraham Lincoln, born in poverty in a one room log cabin, self-educated, became a prairie lawyer, and then the 16th U.S. president, and the symbol of freedom and moral behavior.

There are countless individuals who have transformed themselves in similar fashion. One can take the world of sport. Of the highly competitive sports heroes perhaps two will suffice. Jackie Robinson, born in a family of sharecroppers in Cairo, Georgia, and living in relative poverty in Pasadena, became the first African-American to play in major league baseball, second base for the Brooklyn Dodgers starting in 1947. His role symbolized the virtual end of racial segregation in professional baseball, and was a proponent of the civil rights movement, Robinson was one of the most popular individuals in the country: he was second, after Bing Crosby, in a 1947 popular poll.

Billie King, daughter of a firefighter and  a conservative Methodist family, in Long Beach California, became  the world champion women’s tennis player, the no. 1 professional player with her hard hitting style. Outspokenly controversial, she was an advocate for gender equality and pioneer for social justice.

The Queen’s Gambit miniseries exhibits the competition in the sport of chess. This is not surprising.  The miniseries was adapted from a novel of the same name written in 1983 by Walter Tevis, a novelist with an addiction for the game of pool. He spent most of his life gambling and drinking in pool halls before turning to chess. His life to some extent mirrors that of his character Beth. He was diagnosed as a youngster with a rheumatic heart, placed in a convalescent home, drugged with phenobarbital, and abandoned by his parents. He found comfort in pool, and was fascinated by the game and the atmosphere of the pool room. He died of lung cancer at age 56.

Trevis was aware of the fierce determination of players of chess: he remarked of  Bobby Fischer, he had “the killer instinct written on his face.” He also knew the intensity of the drama of the game. In the book by Trevis and in the miniseries, Beth is shown humiliated and losing control after one of her rare losses to an inferior opponent. The miniseries is a powerful assertion that many professional players of chess, as of pool, are loners trying to escape from personal problems, highly intelligent outcasts from society. In the light of this it is a real pleasure that the magnificent production of QG has given us the opportunity to probe the life of  Beth Harmon the complex figure who uses a gambit, an opening move making sacrifices in order to gain a pivotal position, control of the center of the board.