The Truth about Genocide 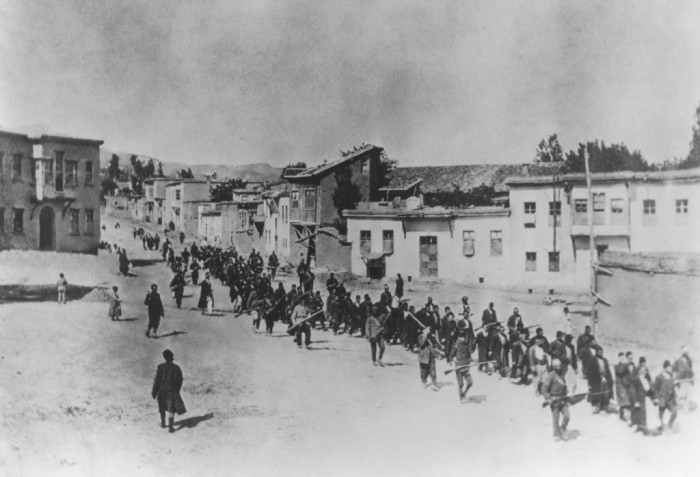 In the spring and summer of 1915 thousands, about 90%, of the ethnic group of Armenians were driven from their homes through Eastern Anatolia, Turkey, towards the Syrian desert. Historians agree with the Armenian account that 1.5 million died as a result of killings by Turkish soldiers and police, using not only weapons but axes, shovels, pitchforks, and from starvation and disease. It was, in the words of U.S. Ambassador Henry Morgenthau, “a place of horror,” where every man in villages was murdered in cold blood. He later wrote that Jevdet Bey, governor of the province of Van, gave instructions   to exterminate all Armenians in the province. The renowned painter Arshile Gorky escaped the massacres only to watch his mother die of starvation  and  his family scattered in flight from the Turks.

Turkish authorities have admitted Armenians were deported, but “only” 150,000, and that Turkey had no intention of eliminating a whole people. They explain that during World War I Armenian armed gangs were cooperating with Russia, allied to the West, to gain control of the eastern provinces of the Ottoman Empire. Turkey has always rejected any description of the fate of the Armenians as “genocide.”

Western countries in general have been reluctant to condemn the atrocities by Turkey in this extreme way. It was surprising that President Joe Biden on April 24, 2021 spoke of remembering those who died in the Ottoman-era genocide, and that the American people honor all those Armenians who perished in the genocide that began 106 year ago, on April 4, 1915. The speech may be largely symbolic, but it is a reminder of the horrors of history, the corrosive influence of hate, the evils of bigotry and intolerance.

Can and should the massacre of Armenians be characterized as genocide? The term is very specific, meaning crimes committed by deliberate killing of groups with the intention of eliminating all those belonging to particular racial, political, or cultural group. The term was coined in 1944 by Raphael Lemkin, a Polish Jewish lawyer, in a book on the Nazi German policies of destroying and annihilating national and ethnic groups, including the Holocaust, the mass murder of Jews.  Largely through his influence, the UN General Assembly on December 11, 1946   declared that genocide was a crime under international law, condemned by the civilized world. This led on December 9, 1948, to the UNGA approving the Convention on the Prevention and Punishment of the Crime of Genocide. Accordingly, genocide, acts to destroy in whole or in part, national, ethnical, racial or religious groups, is established as a crime under international law.

Though Lemkin was primarily concerned with the Holocaust, he said he had been disturbed as a student in lvov University  by the persecution of Armenians and was particularly interested in the assassination in March 1921 in Berlin of  Mehmed (Talaat) Pasha, political leader of the Ottoman Empire during World War I who is regarded as the main perpetrator and person responsible for ordering the destruction of the Armenian people.  Lemkin cited this destruction in 1915 as a seminal example of what he came to call genocide, and it affected his thinking.

President Biden is the first U.S. president to call the treatment of 1.5 million Armenians by the Ottoman Turks  a genocide, but other American politicians have been concerned. In April 1981, President Ronald Reagan obliquely referred to events , “like the  genocide before it, the lessons of the Holocaust must never be forgotten.”   On October 29, 2019 the House of Representatives voted by 405-11 to pass a resolution recognizing the Armenian genocide as part of the policy of the U.S., and a month later, on December 12, 2019 the Senate by unanimous consent passed a resolution formally recognizing the genocide of 1.5 million Armenians had occurred.

Turkish President Recep Tayyip Erdogan urged Biden to reverse his declaration, saying that his “baseless, unjust, and untrue” remarks had opened a “deep wound” in relations between the two counties.  He advised the U.S. to look in the mirror, referring to the U.S. treatment of Native Americans. He again justified the Ottoman action because the Armenians had risen against the Ottoman rulers and sided with the Russian troops in World War I. He is adamant. Turks who refer to the event as a genocide have been prosecuted for insulting “Turkishness.”

However repressive Erdogan may be, he cannot convince international opinion. At present, 32 countries, governments and parliaments, including Russia, China, Vatican City, and Western Europe, though not UK or Israel, declare the 1915 event as genocide. These countries, however, do not blame Turkey or the Turkish people, but blame the Young Turks in power in 1915.

Yet the issue is not completely resolved. France can be taken as an example of lack of unanimity. France in 2001 recognized the event as genocide., the first country to do so.  A monument honoring the victims was in April 2003 erected on the northern bank of the Seine. In February 2019 President Emmanuel Macron declared April 24, 1915, the beginning of the deportation, a national day of commemoration in France.

But attempts to criminalize genocide denial have had problems. On October 14, 2016 the French Senate approved a bill that made denial of the Armenian genocide a criminal offence, but the Constitutional Council in January 2017 ruled against it, holding it was an unnecessary and disproportionate attack against freedom of speech, and rescinded the ruling which labeled the ruling as a “hate crime.” However, the problem remains. In October 2020 supporters of Turkey, the far right “Grey Wolves,” nickname for an ultra-nationalist Turkey youth movement allied to Erdogan’s party, AKP party, rioted in Decines, near Lyon, shouting death to Armenians, spraying Armenian monuments, and displaying Turkish flags. Though the Grey Wolves were officially banned by France in November 2020 it still persists in violent actions and threats.

Turkey does not appear as a priority for the Biden administration. However, whether deliberately timed or coincidental, the U.S. declaration on genocide comes at a moment when U.S. relations with Turkey need clarification for a variety of reasons. First and foremost is the issue of Erdogan himself who is becoming increasingly nationalist and Islamist, and unfriendly towards the U.S. which he accused of being involved in the failed coup against him in 2016 because of the presence of his critic, the cleric Fethullah Gulen living near Saylorsburg in Pennsylvania since 1999.

Recep Tayyip Erdogan is eager to see Turkey,  with its 80 million population, as a regional power, and himself as a rival with the ambitious Sheikh Mohammed bin Zayed, MBZ, of Saudi Arabia . He has clashed with France and the U.S. over Syria, Libya, Iraq and the eastern Mediterranean, and inability to join the EU.  Turkey challenged Greek and Cyprus sovereignty, and ferried Syrian militants to Azerbaijan to take part in the Nagorno-Karabakh war. It has helped the government forces in Libya which are opposed by the Libyan National Army.

In the Middle East Erdogan stressed the importance of the Al Aqsa mosque, is friendly to the Muslim Brotherhood , and Turkey has occupied parts of northeast Syria, and  parts of Iraq and Libya. It is planning an airbase in al-Watiya in western Libya, a garrison in Qatar, a 99 year lease over Suakin Island as the result pf rapprochement with Sudan, and has an overseas base in Mogadishu, Somalia. Once, close to Israel in defense, security and trade, friendship has virtually end after the clash between Erdogan  and Shimon Peres at the infamous panel in Davos in 2009.

A second problem is the war between Armenia and Azerbaijan over the area of Nagorno-Karabakh.  Macron was the first Western leader to state that Azerbaijan had started the war, and also that Turkey had sent 2,000 Syrian mercenaries to fight in the war. This issue is complicated because the region is internationally recognized as part of Azerbaijan but is controlled by ethnic Albanians. Two other issues have been problems. One is that, against U.S. arguments, Turkey bought Russian S-400 missile defense systems a threat to U.S. F-35 fighter jets., and to NATO. A major difference has been over the war in Syria. The U.S. has been supporting Kurds in   Syria, while Turkey claims they are affiliated with the Iraqi Kurdistan Workers’ party, PKK, which Turkey opposes in northern Iraq.

These differences need attention, but they should be seen in the context of history. On June 9, 2000 in a statement in the New York Times 126 scholars including Elie Wiesel signed a document that “the World War I Armenian genocide is an incontestable historical fact and accordingly urge the governments of Western democracies to likewise recognize it as such.” The Armenian genocide may not have been a dress rehearsal for the Holocaust, but it has been subjected to denial and falsification of historical realities similar to the distortion and falsehoods of antisemites denying the Holocaust.