The United States Senate and the Presumption of Innocence 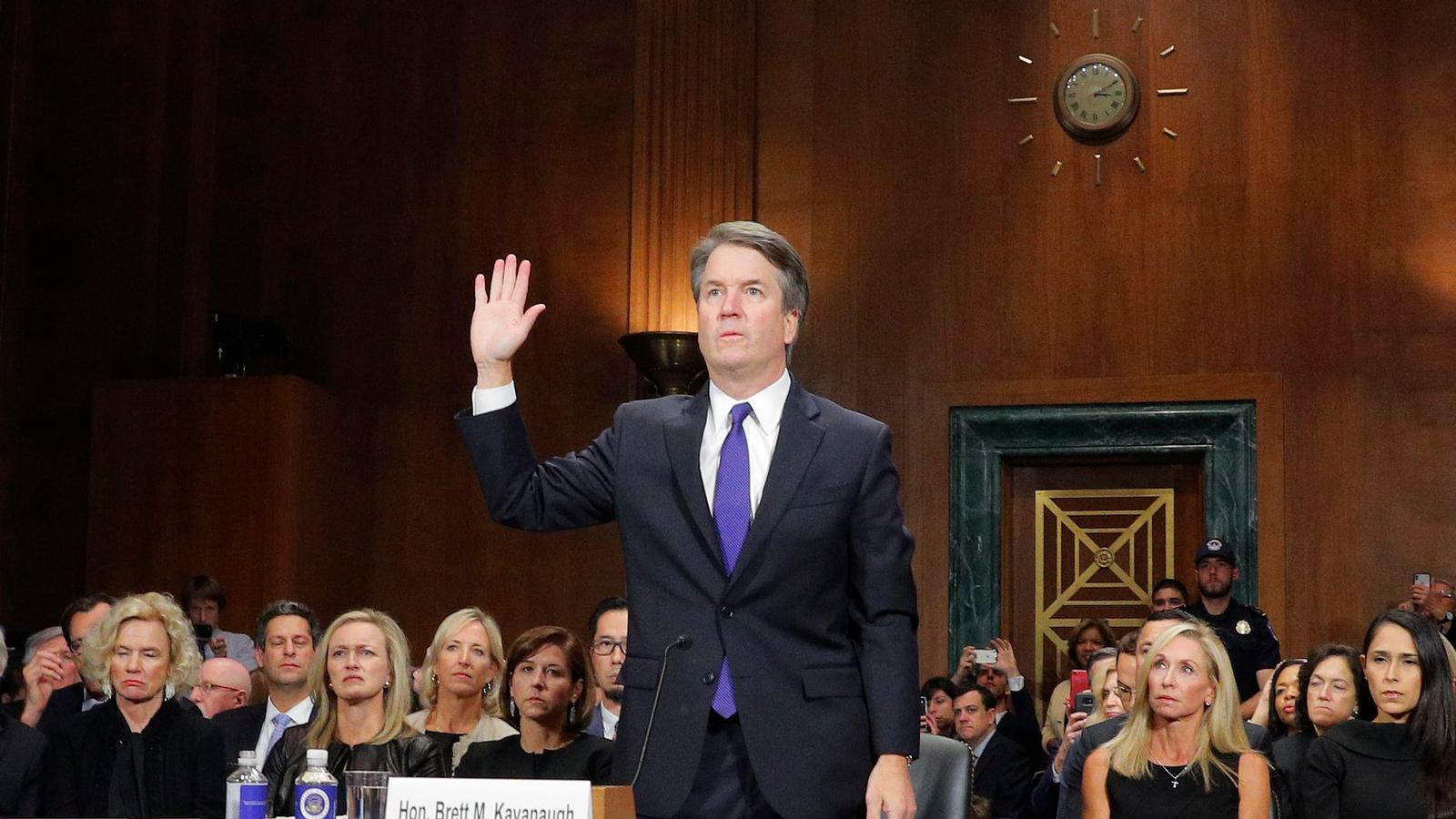 For what is a person profited if he or she shall gain the U.S. Senate and House of Representatives, and lose his/her own soul? The highly emotional day hearing in the Senate Judiciary Committee on September 27, 2018 listening to allegations by Dr. Christine Blasey Ford, a California  academic psychologist about a sexual assault on her by Judge Brett M. Kavanaugh in 1982 when she was 15 and he was 17 was more an occasion for cynical display of partisan politics than a genuine search for truth on the part of the members of the Committee.  It was essentially a political charade, a turbid ebb and flow, aimed at delay by Democrats of a vote on the nomination of Kavanaugh to be a member of the U.S. Supreme Court.  On the part of Republicans it included an effort to satisfy the demands of the #Me Too Movement while propelling their candidate to affirmation of Kavanaugh.

The starting problem is the divide and uncertainty about the validity of conflicting accounts by Ford and Kavanaugh of events 36 years ago. That uncertainty was understood by Republican leaders. President Donald Trump commented that Blasey Ford was a very credible witness, compelling, a very fine woman, and Kavanaugh’s testimony was powerful, honest, and rivetting. Republican majority leader Mitch McConnell thought both testimonies were “heartfelt.” There was no definitive outcome, and both sides remained convinced of their own views.

Perhaps the intended FBI investigation will provide further light relevant to the conflicting version of events.

Truth is elusive. We have been here before in fact and in fiction. The #Me Too Movement has focused on harrassment and attack on women, and on the fact that women in the past were reluctant  to speak about their treatment. Now they are speaking out. At the same time there can be abuse of  the truth. One fabricated case was the false charge of rape in March 2006 carried out by three members of the Duke University lacrosse team. The accuser was a student who worked as a dancer and stripper. She alleged the rape took place at  a party in a house  in Durhan, NC. Her story changed from time to time, at one time four players were involved in the rape, at another time only one. The three men were suspended, but a year later the charges were dropped. According to university officials, they had been victims of a “tragic rush to accuse.”  But support for the false accusations had been publicized in the local media, faculty and student groups, and the local community, and damage had been done.

In 1950 the powerful Japanese film Rashomon directed by Akira Kurosawa told the story of a murdered samurai whose body was discovered in a forest. At the murder investigation, four people and the ghost of the fifth, gave different accounts on what happened, and of possible motivation. In this case of murder and rape, contradictory depictions emerged, and there was no way of knowing the truth, which indeed may never be known, nor was there any solution presented out of the multiple realities suggested.

In similar way, in the American film, The Usual Suspects, of 1995, obviously influenced by Rashomon, a suspect being interviewed by a police official unveils a complicated story with multiple revelations, all false and all derived from his own character. What we see on scene, supposedly reflecting the truth about the legendary crime lord, Keyser Soze, does not corrspond to the reality as we find out.  The mixed conclusion is to suspect what we have seen.

Different, contradictory versions of events were presented in the forum of the Judiciary Committee on September 27, 1982, and opinion about their accuracy was divided, largely if not wholly on political party lines. But there is more certainty about the political maneuvering and boorish behavior of some of the Senators. The hearing was more a theatrical spectacle of cynical games, a venue for display by competing possible Democratic presidential candidates, than a locale where truth was spoken to power.

There are legitimate differences on the validity of the presentations of Ford and Kavanaugh, but agreement is more likely on other factors. One is that the hearing was not one of the finest hours in Senate history and the conduct of a number of the Senators was questionable. The second factor is the virtual refusal to discuss the merits of the issue, since minds were already made up on a partisan basis. We are familiar with Alice; “sentence first, verdict afterwards…you’re nothing but a pack of cards.” An axiom of democratic politics is that decision making stems from listening to and adjudicating between conflicting sides of a dispute. This was not the case of some Senators who walked out of the hearing of the Committee, and others who refused to vote on a motion to proceed. This proclamation of absence must be one of the most bizarre interpretations of the Senate’s role of “advice and consent.”

In political argument, passion is to be expected, as is anger and emotion, as well as cool argument, especially on allegations that are disputed and unsubstantiated by other persons. Politics, as Max Weber wrote, takes both passion and perspective. But gladitorial displays, exemplified by Cory Booker, the would be Sparatus and presidential contender from New Jersey are more appropriate for the circus than the political arena.

In the present case, there remains behavior and statements that need scrutiny not only about the believability of allegations concerning Kavanaugh but also about the actions and non-actions of some of the Senators especially the curious and controversial behavior of Democratic ranking member of the Judiciary Committee Dianne Feinstein who had not revealed her knowledge of the allegations for several weeks and thus delayed Senate discussion of them, presumably for political partisan reasons. Democrats objected that Committee chair Senator Grassley was conducting the meeting in an autocratic way.

The third, and most important factor, is the lack of respect for the rules of the political game, such as prohibition of leaking of priviledged information, and, above all, disregard of crucial elements of the rule of law.

On July 9, 2018, President Donald Trump nominated Judge Brett M. Kavanaugh for the vacant seat on the Supreme Court. Twenty minutes later, Senate Minority leader Chuck Schumer announced that he and his fellow Democrats would do everything possible to derail the nomination: “I will oppose him with everything I’ve got.” It is appropriate for politicians to approve or disapprove of policy out of philosphical conviction. But it is not appropriate to rush to judgment without any examination of the alleged events or to ascribe guilt, even if expressed in cynical fashion, as Schumer did. Later in regard to the hearing in the Senate Judiciary Committee when Kavanaugh faced allegations of sexual misconduct, he said that Kavanaugh received “no presumption of innocence or guilt as a nominee seeking conformation.” The absurd excuse for the equivocal statement was that the event was not a criminal trial, but “a fact finding procedure.”

Irrespecive of differing views of the allegations against Kavanaugh, what is most troubling is this disregard of or indifference toward a cardinal principle of the rule of law and presumption of innocence while in pursuit of  political objectives, and, at an extreme, the politics of personal destruction. It is astonishing that Senators, perhaps lacking historical knowledge, need reminders of this basic principle. The French Declaration of the Rights of Man and of the Citizen, August 26, 1789, states Article 9, “everyone is presumed innocent until declared guilty.” The UN Universal Declaration of Human Rights, December 1948, states in Article11, “Everyone charged with a personal offence has the right to be presumed innocent until proved guilty according to law in a public trial at which he has had all the guarantees for his defense.”

There are similar assertions in the same language in the document of the Council of Europe, The Convention for the Protection of Human Rights and Fundamental Freedoms, adopted in 1950 and entered into force in 1953 by the Council of Europe. The principle is also endorsed in the December 1993 Constitution of Russia, Article 49,  “everyone charged with a crime should be considered not guilty until his or her guilt has been proven.”

In the U.S. the Supreme Court in  Coffin v. U.S. 1895  held that the principle that that there is “a presumption of innocence in favor of the accused is the undoubted law, axiomatic and elementary, and its enforcement lies at the foundation of the administration of our criminal law.” Alexander Hamilton, Federalist 68, warned of the “talents for low intrigue and the little arts of popularity” of some polticians. It might be more useful for the FBI to conduct an investigation into Senatorial understanding or lack of comprehension of the meaning of presumption of innocence as well as search for evidence of Kavanaugh’s culpability or innocence.