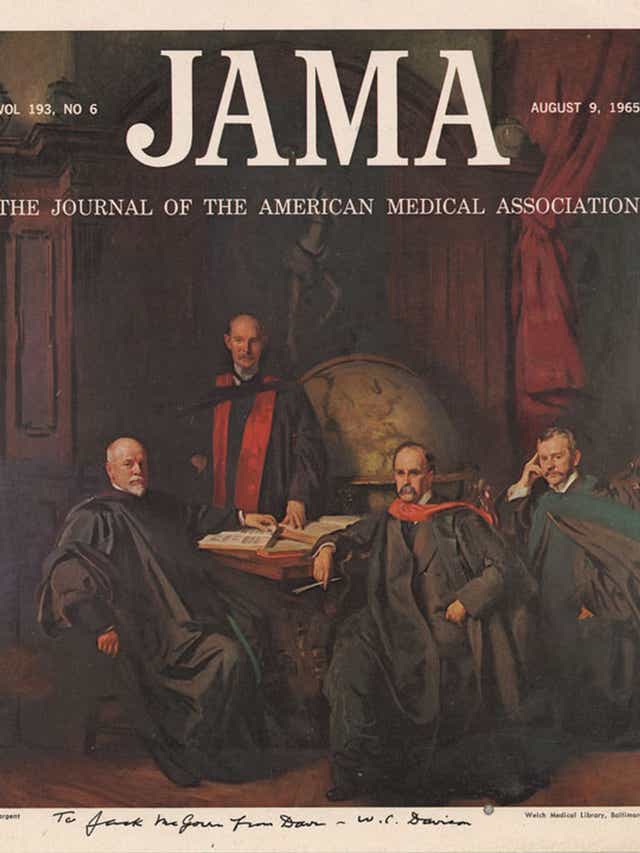 It was a common trope of the extreme right in France before the war that no Jew could really understand Racine.

This was because a Jew had no true homeland and none of the national roots (oddly enough, Racine means root in French) essential to a true, visceral appreciation of the great tragedian’s poetry. He could not feel Racine in his blood, however great his mastery of French: indeed, such mastery, if he had it, was regarded as sinister, dangerous, false, and probably treacherous.

The Woke in America are increasingly like the extreme right in pre-war France, though they are more successful in that they have needed no German occupation and no Marshal Pétain to take control of the country’s intellectual life and impose their orthodoxy.

The latest triumph of Woke-dom in America is the forced resignation of the deputy editor of the Journal of the American Medical Association (JAMA), who had the temerity to suggest in a podcast that there was no longer any institutional racism in American medicine, and that constantly to harp upon such non-existent structural racism was possibly harmful or counter-productive.

He had to resign at once in ignominy, while his superior, the editor himself, issued an abject apology—which, however, did not prevent him from being suspended from the duties that he had performed for ten years.

From the reaction, you might have thought that the American Medical Association, the owner of JAMA, had discovered to its horror that it had been harboring a chapter of the Ku Klux Klan within its ranks.

This, however, is not the case; JAMA has long been as Woke as Woke can be. It cannot be accused of disregarding race in the research it publishes: here, for example, are the titles of two of the six papers posted on the JAMA Open website on March 27: “Factors Associated with Mental Health Symptoms and Black and Latinx Transgender Youth”; “Racial/Ethnic Disparities in Interhospital Transfer for Conditions with a Transfer Benefit.”

I am not commenting on the scientific value or otherwise of these papers; suffice it to say that JAMA’s emphasis on race as a variable to be researched does not surprise me in the least, and it is far from the only medical journal to exhibit something approaching an obsession with the subject.

Dr. Bradley, a black anesthesiologist with an interest in medical ethics, was reported to have reacted favorably to the resignation of the deputy editor and the suspension of the editor. He said: “The decision to remove Bauchner [the editor] potentially corroborates JAMA’s intentions to become a more culturally competent organization.”

He went on to say: “Hopefully, this signifies an increased effort to diversify the staff at JAMA, as increased diversity will provide additional viewpoints on issues surrounding ethnicity, culture and socioeconomic status.”

Clearly, the idea that institutional racism in American medicine no longer exists is not one of the permissible or possible viewpoints in the brave new world of diversity, where (to quote Henry Ford in another context) you can have any color you like so long as it’s black.

Even less permissible would be the idea that constant dwelling on obstacles to advancement rather than taking personal steps to overcome them is to increase their magnitude and ensure their survival, even growth. No such thought may be allowed even to enter anyone’s head, let alone be expressed.

Inherent in the above quotes is a curious theory of knowledge that is part Marx and part Alfred Rosenberg, the theorist of Nazism. Marx, in his “Contribution to the Critique of Political Economy,” said: “It is not the consciousness of men that determines their being, but, on the contrary, their social being that determines their consciousness.” By this he meant that you think what it is in your interest, as a member of a social class, to think.

And if you add to this the deeply racist premise, taken from the definition of racism in the Oxford English Dictionary “that distinctive human characteristics … are determined by race” and voilà, you have the idea that diversity of thought is a matter of diversity of race, and of nothing else: for among the most important human characteristics determined by race is thought and world outlook.

Another corollary is that all members of any given race think alike, except perhaps for the occasional traitor (for example, Tom Sowell and Clarence Thomas in the case of American blacks).

The reaction to the deputy editor’s podcast was as immediate as a knee or ankle jerk: The editor’s apology did not have to pass through his cerebrum; his spinal cord was quite sufficient.

And it is said that JAMA received 7,000 protests after the podcast, probably a hundred times more numerous at least than any expressions of support for the deputy editor. And in these days of intellectual mob rule, it is the most vociferous who have the right to determine what may and may not be said.

In his apology, which of course was immediately rejected as being too little and too late (the thirst for the abjection of others being unslakable), he said: “The podcast on structural racism … has been withdrawn. Comments made in the podcast were inaccurate, offensive, hurtful, and inconsistent with the standards of JAMA.”

What are the standards of JAMA? They seem to be those of the Soviet Union, in particular erasure of inconvenient records of the past. An Oxford historian told me that in the 1930s, the editors of the Great Soviet Encyclopaedia wrote to the Bodleian Library, which had a copy of it, asking it to remove a page which was in disaccord with the latest twist of Soviet ideology and policy and replace it with an enclosed page which reflected to current orthodoxy: and the library duly complied. JAMA is taking a leaf, so to speak, out of the Bodleian’s book.

Like the offending page in the Great Soviet Encyclopaedia, the podcast has been removed; it is not the subject of discussion, but of anathema, which is now the highest form of argument.

Note also that causing offense or hurt is now a supposed reason for erasure of what had been said or for censoring what can be said in the future. But, of course, only certain kinds of hurt or offensiveness are reasons for erasure and censorship: the deputy editor claimed to be offended by the suggestion that, if structural racism existed in American medicine, he must be, ex officio, a racist.

However, the offence he took was not bankable, so to speak; the very fact that he had denied the existence of structural racism demonstrated just how racist he was and how deeply ingrained was structural racism.

We are back to the days when an accused witch was thrown into water: If she sank and drowned, she was innocent, but if she floated and survived, she was guilty and therefore had to be executed.

PrevRomney Appears to Have Been Awarded for Malice Toward Trump
Homage to Alexei Navalny, Courageous RussianNext