Trump and His Enemies

He ran for office against both parties and the status quo and carries the fight into the midterms. 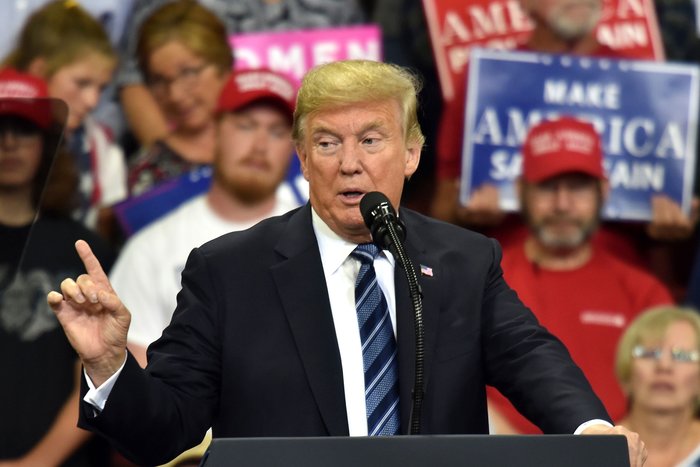 The unusually eventful summer has reinforced the stark division between the supporters and enemies of the administration. And in this case, there is no point engaging in the traditional sportsmanlike nomenclature of describing the opposition as “adversaries.” They are enemies and the president would not wish it any other way. He ran for office against both parties, the lobbyists, almost all the national political media, and the politically active elements of Wall Street, Hollywood, and Silicon Valley. Keeping this in mind, it was disappointing but not surprising that the protracted obsequies of Senator John McCain became a shadow lamentation of the absence in the current president of the qualities that most of the official mourners posthumously discovered in Senator McCain. His patriotism and courage are not at issue; his flawless selflessness and judgment are less clear. It was a shameful thing to exploit a state funeral in this way, but illustrative of the fight to the political death between the all-party, multi-vocational, entrenched political establishment and the ferocious Trump movement.

Trump has won the first three rounds, the Republican nomination, presidential election, and effective takeover of the Republican congressional delegation and party apparatus. But his enemies, in both parties, didn’t realize they were under serious threat until Election Night. With Speaker Paul Ryan and Senators Bob Corker and Jeff Flake departing, the only prominent Never Trumper in Congress who is visible to the public is Senator Ben Sasse of Nebraska, who finesses it at times, indicating that even some of those Republican officeholders with a strong aversion to Trump will at least vote with the administration as long as the president is winning. By its nature, this battle can’t lead to compromise, just as there was no honeymoon. This level of division and antipathy can be resolved only by a decisive win or almost terminal mutual attrition.

American election campaigns normally begin right after Labor Day, and on the first day this year, there were three blockbuster events. First, the start of the confirmation hearings for Supreme Court justice-designate Brett Kavanaugh identified the Democrats implicitly with the shrieking hecklers who were evicted from the committee room. And Senator Richard Durbin’s effort to stigmatize Judge Kavanaugh because he was chosen by “Donald John Trump,” who is (apparently) demonstratively “contemptuous of the rule of law,” and similar essays of enraged self-puffery by some of his colleagues, won’t fly. The softer edge of the anti-Trump Resistance knows that despite frenzied efforts to extort and suborn evidence against Trump for two years, none has been found. All that can be said in defense of Durbin’s nonsense is that it effectively exonerates Richard Nixon, an outstanding, if sometimes careless and slightly neurotic president. The Durbin Trump-moral-leprosy argument is bunk. The president’s taste can be challenged at times, but even in this war zone, you can’t remove people from office or reject their well-qualified nominees for that.

Also on Tuesday, the Democrats fired an instantly fizzling cannon with the inevitable Bob Woodward’s customary pastiche of fabrications, unsourced misquotations, and malicious gossip. Woodward’s credibility has been impugned by almost all of the last nine presidents; his original co-mythmaker Carl Bernstein has almost battered himself into insensibility with his pronouncements in the last six months that Trump was finished because under the 25th Amendment he was mentally incompetent and then because the Manafort and Cohen cases put him into the legal self-ejection seat. Woodward, the old sniper who never dies, on Tuesday had the distinction of being called a liar by two four-star Marine generals, John Kelly and James Mattis, both among the very few holders of high public office in living memory whose integrity could not be and never has been questioned. In this toxic atmosphere they were confirmed in the Senate last year by a combined vote of 186 to 12, nonpartisanship’s last gasp, for a while.

The United States is now like Egypt, in that the armed forces are the only respected institution left standing. A narrow majority disapprove of the president, and steadily larger majorities are doubtful of the judiciary, despise the Congress, loathe the academy, and detest the national media. In a democracy, somebody will pay for this, and it is unlikely to be Donald John Trump, the principal accuser of the others. Woodward should never have survived as an author after inventing the deathbed confession of a comatose William Casey in his nasty novel Veil about the Iran-Contra fiasco, but this time he took one for the losing team and shot himself in the head with a howitzer. Sending him into battle to win it for the Democrats two months before the election is like dispatching a small brigade of very aged arsonists to fight one of the California summer forest fires that the new prophet of the Democrats, Bernie Sanders, says was caused by this president’s opinion of climate change.

Finally (still on the first day of the campaign), Robert Mueller accepted written answers to questions from the president on collusion matters. Inspector Javert is hanging up his badge. This is a concession that he can’t subpoena the president and has no evidence of Trump–Russia collusion and no chance of a perjury trap. The thought, expressed by many in the media, that Mueller could still hang tough on questioning of the president about obstruction of justice is, like the Democratic-media echo chamber’s joyous ululations over the Woodward drivel, rubbish. That circus has flopped; strike the tents. Day One was a disaster for the Democrats.

Either the Democrats will win the House of Representatives and force an utterly hopeless impeachment trial on the Senate with only the ravings of Maxine Waters and the false pieties of Dick Durbin et al. as a case, or they will win the House but recognize that they have no case and leave it there after an excruciatingly futile debate; or the Republicans will hold the House and Donald John Trump will grind his heel in the faces of his rabid enemies. The conventional wisdom remains that the Democrats will win the House. I don’t think so. No president has ever run a midterm campaign remotely as determined as this president will, his objective performance in office is good — the economy, the border, and trade; his only weaknesses are stylistic, but he is a good deal more substantial and even likable than his gutter-sniping enemies.

My uninformed suspicion is that the president has not accepted Attorney General Jeff Sessions’s letter of resignation of last May, and has delayed ordering the release of all the documents the congressional committees have demanded from the Justice Department, for a reason. The right moment for the documents is very soon. The president has made a hero out of Sessions to the Democrats, although all 48 Democratic senators opposed his confirmation and Elizabeth Warren promised vengeance on the Republicans for installing him. If Sessions repossesses his office as collusion evaporates, it will be difficult for the Democrats to change lanes again on Sessions. It would also not be surprising if something were heard in the next two months from John Huber, the U.S. attorney for Utah, whom Sessions appointed ten months ago to look into the FISA and Clinton Foundation–Uranium One matters. He would be a much more dangerous rabbit to emerge from the pre-electoral hat than the Ancient Mythmaker, Woodward.

Trump has not got to this historic point by being the blustering and crooked buffoon portrayed by his enemies. He is a cunning and pitiless enemy. This is political mortal combat, and in evidentiary as in electoral matters, you can’t fight something with nothing.

PrevHow the Washington Post Covered the End to American Funding for UNRWA
Too Often, Tort Law Introduces Populism in JusticeNext