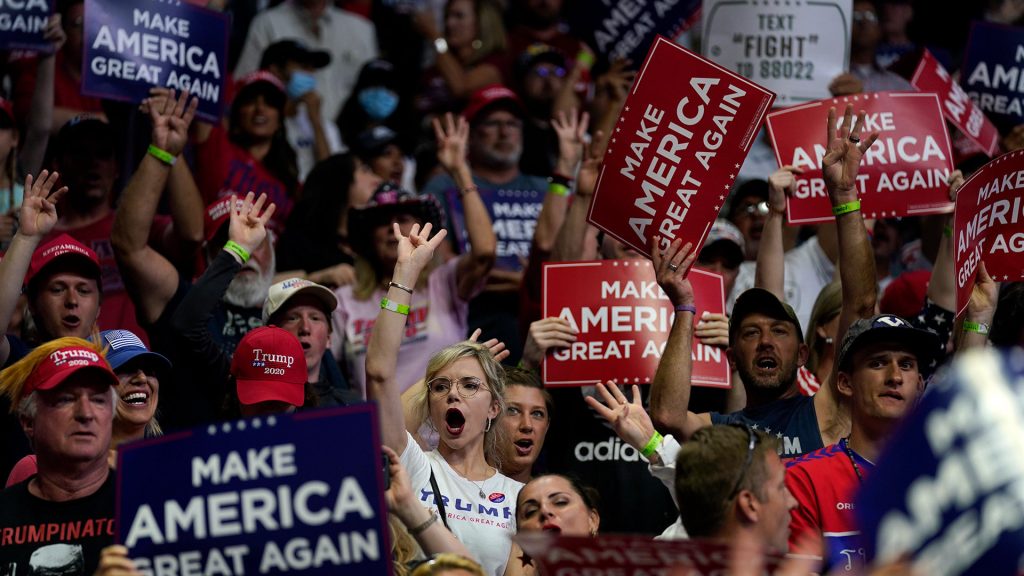 It’s humorous but very predictable to see the muted response to former President Donald Trump’s clean-up in the latest primaries.

Trump impeacher Rep. Peter Meijer (R-Mich.), who was defeated in his Michigan congressional district, attacked the Democrats for their childishly Machiavellian wheeze of this election season in supporting pro-Trump Republicans for the nominations on the conjured wish that they’ll be easier to beat than anti-Trump Republicans.

The pro-Trump candidate for nomination as Michigan governor, the articulate and photogenic Tudor Dixon, won and seems to be giving Gretchen Whitmer a real cause for concern. In the dismal gallery of Democratic governors of large states—among Govs. Gavin Newsom (California), Kathy Hochul (New York), Tom Wolf (Pennsylvania), Phil Murphy (New Jersey), and J.B. Pritzker (Illinois)—Whitmer seemed to be a bit of a star, despite her abysmal hypocrisy and misplaced authoritarianism over COVID-19 and the FBI’s alleged efforts to stage a fake kidnapping attempt on her.

Dixon, like the pro-Trump Republican nominee for governor of Arizona, Kari Lake, was dismissed by the beleaguered but incorrigible Trump-hating political media as “a conspiracy theorist” (according to CNN) because she believes that where there were millions of harvested ballots that were impossible to verify under a welter of voting and vote counting alterations, most of them of questionable constitutionality and all of great benefit to the Democratic candidate, there’s serious doubt about the validity of the presidential election results. Lake was much derided on these grounds and as a mere television news personality, and former Vice President Mike Pence ostentatiously supported her chief rival. Lake won every county in Arizona, and the Trump slate was nominated to every office in Arizona. It was a scorching victory in McCainland.

Even the ultraliberal state of Washington, home of the Seattle summer festival—summer of love and complete anarchy—two years ago and the Green proponent Gov. Jay Inslee, has furnished a very close call in the state’s third congressional district, where a decorated Green Beret and Goldstar husband, Joe Kent, has been trying to unseat Jaime Herrera Beutler (R-Wash.), a five-term liberal Republican who voted to impeach the former president. As this is written, Beutler’s lead has been reduced to 257 votes with some thousands remaining to be counted. Whatever the outcome, Kent would certainly have won if another pro-Trump candidate, Heidi St. John, had withdrawn from the race as she had promised when Trump endorsed Kent.

For some months, political commentators traditionally supportive of the Republicans but unwaveringly hostile to Trump have given a good deal of attention to encouraging Republican candidates to disregard Trump and cease to be concerned about what they assured them was his steeply declining popularity and political relevance.

The facts are that Trump led the estimable Florida Gov. Ron DeSantis in the CPAC poll on the weekend in Dallas by 45 points. Trump’s endorsements were widely sought, and so far, 95 percent of incumbents whom he endorsed have been successful in their quest for renomination, and roughly 67 percent of those who weren’t incumbents have been successful.

The reason why this is important isn’t just that it’s a barometer of the former president’s continuing popularity in the Republican Party and, accordingly, to a substantial extent in the country (as few Republican officeholders and office-seekers would go to the wall for a man profoundly despised by the majority of Americans, as his critics endlessly allege). The primary results to date, which should be topped out by the richly deserved and decisive rejection of Congresswoman Liz Cheney (R-Wyo.) by the voters of Wyoming on Aug. 16, constitute a definitive rejection of the almost totalitarian effort to impose upon contemporary history the fraud that there’s no possible question about the validity of the 2020 presidential election result. In America today, there are majorities for election denial and climate denial.

There’s no legitimate point now in my reciting some of the confident predictions of my friends among the Never Trumpers to the effect that Trump and his supporters were a melting iceberg that no serious Republican need be bothered with; readers will be familiar with them, and we’re all guilty at times of believing what we want to believe. But more important is the diehard pretense of the long-serving Republican Senate leader Mitch McConnell (R-Ky.) that it’s now a tossup which party will win the Senate in November.

McConnell was very cranky that Trump, after his questionable election defeat that McConnell almost publicly welcomed, didn’t turn himself inside out trying to save the Senate seats in Georgia and preserve McConnell’s sinecure as Senate majority leader. McConnell seems unable to reconcile himself to what’s now largely a Trump Republican Party poaching heartily on the traditional Democratic fiefdoms of African and Hispanic Americans and broadly working-class voters.

It seems to not console McConnell and his fellow Never Trumpers that the former president is so successfully repositioning the Republican Party by using the traditional capitalism of the country club Republican Party and vacuuming up the votes in economically disadvantaged areas by using the tax system to incentivize job-creating investment in those areas. It was a winning strategy in two presidential elections, and it clearly still is. (It’s regrettable that South Carolina’s Sen. Tim Scott has probably taken himself out of the race for vice president in 2024 by endorsing the reelection of Cheneyite Trump-hater Alaska Sen. Lisa Murkowski.)

Trump could scarcely have asked for a better week. House Speaker Nancy Pelosi (D-Calif.) showed the leadership lacking in the White House and made some excellent points on her visit to the Far East. President Joe Biden himself, with the killing of the Al Qaeda leader Ayman Al-Zawahiri and the passage of the greatest legislative misnomer since Franklin Delano Roosevelt used to label pork barrel bills as legislation to enhance the status of veterans: the Inflation Reduction Act. Biden appears less ineffectual, and the Democrats have conveniently signed on to a measure that will be a catastrophe.

The midterm elections in less than three months should confirm Trump as the presumptive next president. It will be his obligation to appear less frightening to moderate voters than he often has before. But there can be no pillory of him as there was in 2016 of being a racist, sexist, and incompetent warmonger or even a madman in the pay of a hostile foreign power. All of the nonsense about Russia, Charlottesville, and Trump’s supposed extremism has been debunked.

As for McConnell, he let Trump down on Obamacare, didn’t lift a finger to help reelect him, supported the (second wave of) impeachers, has misjudged the primary voters in many states, and has been thoroughly outplayed by his blunderbuss Democratic analog, Senate Majority Leader Chuck Schumer (D-N.Y.). Instead of hallucinating over the departure of Trump, he might wish to contemplate taking the same step himself.