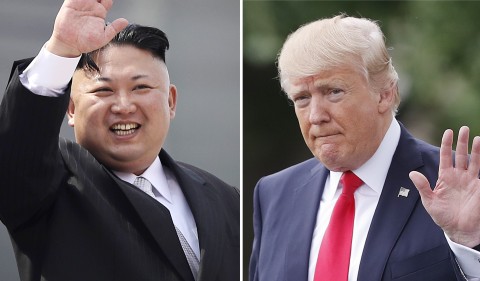 The international political and economic system is more likely to remain stable when a particular state is the dominant power or hegemon, able to dominate the rules of both politics and economics. There has to be, as the economist Charles Kindleberger argued fifty years ago referring to the world economy, a power capable of establishing hegemonic stability. Global markets can’t police themselves, nor can the international political scene.

The crucial question is what is in the national interest of the United States: whether the United States can or should fulfill that hegemonic role today. It is worth considering the issue in the light of American history. In international politics after World War I the U.S. was an indirect influence, but an absent presence, unwilling or uninterested in commitment or action as a deterrent power. The situation was different after World War II when the U.S. played a role in the revival of Europe, in the creation of international organizations, and in attempts to perpetuate liberal, democratic states.

Today the problem arises what role should the US play, and can it be the hegemonic power in a world where among other things China is a challenge, militarily and economically? Donald Trump as candidate and as President, has told us he wants America to be great again, but he is not an isolationist. However, does he want the U.S. to be the dominant superpower?

After the decision to strike Syria with Tomahawks after the chemical attack by the Assad regime on April 4, 2017, the attack on ISIS in Afghanistan, and the joint naval exercises with South Korea after the U.S. nuclear powered aircraft carrier fleet led by the USS Carl Vinson entered the sea of Japan, Trump has been using strong language and suggesting possible action and a “major, major conflict,” with North Korea (formerly the Democratic People’s Republic of Korea, DPRK), because of its five nuclear and a series of ballistic missile tests, its threats of destruction of the U.S., and its progress in developing intermediate-range and submarine-launched missiles.

We can learn from history about wars, some of them “wrong” wars. The reasons for the Peloponnesian war that broke out in 431 B.C. are complex but of them was the refusal of Athens to agree to Sparta’s demand to change its policy of economic sanctions toward the city of Megara. It was an unnecessary war because of incorrect analysis since the basic issue was Sparta’s suspicions of Athens. The U.S. has to analyze correctly the problems in the contemporary world, with conflicts employing new technology, drones, robotics, and cyberwarfare, and a general reluctance to place “boots on the ground.”

There are more than 40 active conflicts in the world today, as well as the threats and actions from organized Islamic terrorist groups from al-Qaeda and affiliates, and ISIS and associates. The main issue, however, confronting Trump today is whether the US should take military action against North Korea. According to Trump in a presidential debate in September 2016, the US will no longer be the world’s policeman. The issue then was of NATO countries not raising their due defense expenses, and the policy of NATO towards Russia.

However, the issue today is different. General H.R. McMaster, National Security Advisor, calls on other countries to prevent North Korea from developing a nuclear arsenal, because it was acting in open defiance of the international community. He preferred working with other countries to resolve the issue, but the U.S. must be ready to intervene with armed forces. After all, the UN Security Council has banned North Korean ballistic missile tests, because they are a step to producing a nuclear armed missile weapon, one that can reach the US mainland.

North Korea is a special case. It is a grave threat not only to the U.S. but to other countries in the Asian region, South Korea, Japan, and China, and also to the State of Israel which has been threatened with “merciless, thousand-fold punishment.” North Korea is believed to have helped Syria to build a nuclear reactor that was destroyed in an attack, probably by Israel, in 2007.

The world is aware that North Korea cannot be trusted. Certainly Bill Clinton was disillusioned, and was forced to recognize a dead end as he asserted the entire world will be safer as we slow the spread of nuclear weapons. On October 18, 1994 President Clinton approved an agreement with North Korea to give $4 billion in energy aid to it if it froze and dismantled its nuclear weapons development program. As a result of North Korean improper behavior the plan broke down in 2003.

Trump has recognized the enemy is North Korea and his policy reflects this in a number of ways. At this point he is unwilling to state overtly that the US response means military action. In a mixed metaphor, he believes policy towards  NK is  a “chess game.” Though he has tweeted that the US could have “a major, major conflict” with NK,  and it cannot be allowed to have a better delivery system, he does not “want people to know what my thinking is.”

To some extent the US is in a dilemma. Trump, has called NK leader Kim Jong-Un “a pretty smart cookie” for achieving power at age of 27 and keeping it. But is he sane? Israeli Defense Minister Avigdor Liberman has called Kim a “madman who is in charge of a crazy and radical group.” Trump remains uncertain, though he is aware that NK is trying to develop a viable missile delivery system with a nuclear weapon. The US cannot tolerate this, and it may lead to imposition of sanctions or military operations.

Trump’s policy is to forge alliances to restrain NK. China is the elephant in the room. Trump claims his rapport with Chinese President XI, a man he has gotten to like and respect is “something very special,” and his visit from Japanese prime minister Shinzo Abe suggests future collaboration in dealing with NK.

Trump’s policy of alliances also explains invitations to controversial figures, heads of state, to the White House. Two in particular have caused controversy. One is Prayuth chan-ocha, prime minister of Thailand and former Commander in Chief who took power in 2014 coup. He assumed sweeping powers, and imposed restrictions on freedom of expression.

Even more controversial is Rodrigo Duterte, President  of the Philippines, being involved in an anti-drugs campaign in which 7,000 people may have been killed in mass murders over three decades. Both Prayuth and Duterte are anticipated to help in restraining NK.   The choice has been made. The restraint of NK is more important in US national interest than the human rights issue in the Philippines, or even other foreign policy issues.

Trump is willing to pay an economic price for the main objective. The US will not be asking South Korea for payment for Thaad (Terminal high-altitude area defense system), an anti-missile system being installed in the country, and costing about $1 billion. Life is complicated. China has protested the deployment of Thaad because it can penetrate its territory and thus, it argues, undermine regional security. For the US the alliance with and protection of South Korea is the US top priority in the Asia-Pacific region.

In his comment on the issue, Pope Francis suggested a third country mediate the dispute between NK and the US, a conflict “risking a war.” One can respect this point of view but the danger to peace does not come from the US but from NK which is a threat to the whole Asian area and to  the world. The national interest of the US suggests it becomes the modern political hegemon.

PrevMay Day in Paris
Hirsi Ali: "The aim of FGM in all its forms is to control female sexuality."Next