I don’t want to go the route of witness statement porn (and yes there is such a thing; the authorities may have clamped down on it but in my time I knew of cases where defendants in sex crimes sold the witness statements against them, which they were allowed to possess so as to prepare their defence, to other prisoners who enjoyed reading of the suffering of the women and children, in their own words…). But as this trial of Huddersfield men at the Crown Court in Leeds was not reported day to day as the evidence was given (indeed it continued with utmost silence under the radar such was the need not to give any pretext for appeal, or I presume that was the reason) the newspapers do now carry some details of how these men abused, hurt and maimed these little girls.

This is the Huddersfield Examiner

A jury had previously heard how the gang lured the young girls into a “dark and sinister world” and took nearly 13 hours to convict the grooming gang.

The teenagers were “systematically groomed and exploited” by the men who viewed the girls as “objects to be used and abused at will”, prosecutor Kate Batty told a jury yesterday….the jury previously heard how the victims were vulnerable and were deliberately targeted by older men.

The victims were groomed by the men who made them feel special by giving them cigarettes, alcohol and drugs it was previously heard. The abuse, which centred in Huddersfield, happened in cars, car parks, parks, hotels and flats, including a flat belonging to a man who was “involved with drugs and had a gun”.

Detectives on the case said the fact that one of the girls was targeted on her paper round “speaks volumes about the sheer depravity of this case”.

The first victim was introduced to older men by a school friend and by the time she was 15, had sex with up to 300 men, the jury heard during the trial.

Social services eventually told the girl’s family that “she must love it if she keeps going back”, according to Ms Batty.

In a victim statement read out to the court, the victim said she kept the abuse “buried” for 22 years

Police said the girls were aged 14 and 13 when the grooming began, with one coming to the group’s attention during her paper round. They were controlled by violence or threat of violence against themselves and their families. One girl would go missing and return home under the influence of alcohol or drugs, the jury had heard, sometimes naked on her lower half and with injuries. She was raped by every defendant in the case, often too drunk to be capable of consenting to sexual activity and sometimes with other people present.

During sentencing Judge Geoffrey Marson QC said while the defendants had shown no remorse, the victims had displayed “great courage”.

He said: “There was evidence she was self-harming. They were young and targeted due to their extreme vulnerability.

“They were planned by a large group of Asian men. They still can’t or won’t say “Muslim”. 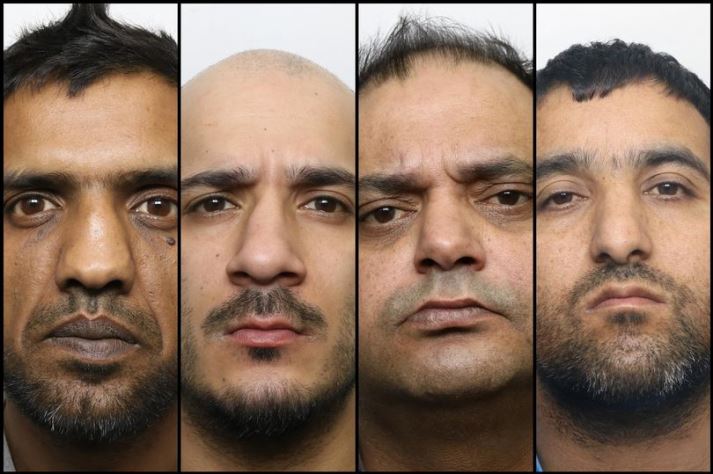 “It’s likely many of these girls will never recover from the abuse they suffered.

“It’s clear they both remain profoundly affected by the abuse.

“The way they were abused defies understanding, and was wild and wicked.

“[One of the victims] was no doubt targeted for her age and vulnerability.

“None of you have shown any remorse for what you have done.”

He added: “On the other hand, these girls have displaced great courage.”

Thirty-four men have already been convicted in relation to Operation Tendersea, and received jail sentences totalling 377 and a half years. It is the single biggest group of convicted rapists in the same area.

A 37-year-old man, who cannot be named, of Huddersfield, is due to be sentenced tomorrow (Thursday) at Leeds Crown Court. I have no idea why he is separate; maybe it will be explained tomorrow.  One thing I know, there is another trial of a different gang going on in Sheffield and that won’t be the last case.