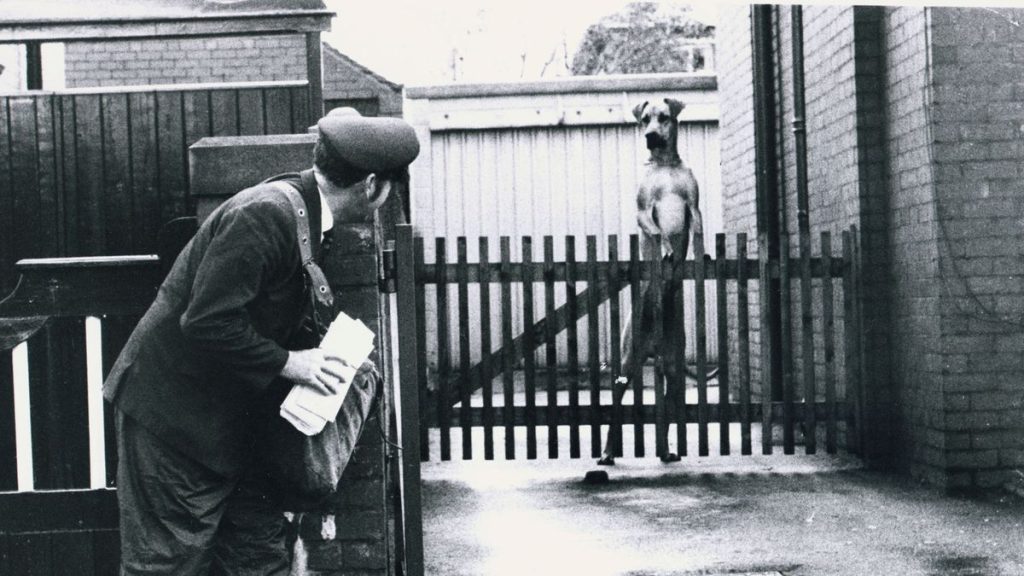 Yesterday I received a letter from England that bore the postmark “Dog Awareness Week.” It came with a printed paw-mark.

Of course, for me every week is Dog Awareness Week. I never go a week without awareness of dogs. Not only is dog man’s best friend, he is man’s only friend. When I walk down the street, therefore, I look with relief from people to dogs.

A chapter titled Why bad dogs? in a manual of dog training that I once read captures exactly my view of dogs. There are no bad dogs, wrote the author, only bad dog-owners. I am not sure, however, that the same can be said of children, that there are no bad children, only bad parents. I have met malevolent children of 3 years who were the offspring of good, or certainly not bad, parents. But then dogs were born without original sin.

I felt slightly disconcerted on reading this, for actually I rather like postmen as well as dogs. My experience of them in several countries is that they are good people, untortured by deforming ambition. Perhaps it is their awareness that they are useful to others that keeps them good-humored despite the fact that they are not at the top of the economic tree. I am, of course, generalizing, and no doubt there are villains among them with a tendency to light-fingeredness, but this has not been my personal experience of them. I don’t recall an impolite or nasty postman.

It pains me, therefore, to think of so many of them experiencing attacks by dogs, a reduction in which is a worthy cause. How many of these attacks are by dogs trained by their owners to be aggressive, I do not know: My impression is that the number of aggressive dogs kept almost as fashion accessories has increased of late, but I accept that this is not scientific evidence one way or the other.

What I wondered about was the effectiveness of the postmark. It was well designed and even pleasing to the eye, but probably very few people noticed it, and of those few who did, probably a majority would have thought as I did at first, that it was a pious slogan against cruelty to dogs. Of those even fewer who had the curiosity to look it up, only an infinitesimal number would have had an offending dog, and very few of those very few would, as a result, take the necessary precautions against their dog attacking the postman.

In a small and by no means deeply offensive way, the postmark was a manifestation of a tide of secular preaching that seems to be rising in Western societies. Packets of cigarettes come almost everywhere with bloodcurdling threats and illustrations that out-Bosch Hieronymus Bosch. Bottles of alcoholic drinks come with the advice that, for the sake of your health, you should not overdo it. (One day they will come with the warning that alcohol can make you drunk.) In the very hot weather recently, I received a text message from my insurance company telling me that I should stay in the shade, not go out too much in the sun, drink plenty of fluids (not alcohol, of course), and so forth.

It is not that any of these messages say anything that is false. Smoking and drinking too much are bad for you, and it is true that you should ensure that you stay well hydrated in very hot weather. The problem is that no one can be found to deny any of these things, and insofar as some people, indeed many people, continue to behave in foolish fashion with regard to them, it is not because they do not have the information in hand about the hazards that they run that can be corrected by a little light badgering. Is there anyone who looks at a bottle of alcohol—whiskey or gin, say—and, on reading the warning, says, “I never knew that, I must be more careful in future”?

The overall impression given by these warnings is that we are a population of rather weak-minded, ignorant minors who are, or ought to be, the wards of a small class of well-intentioned guardians who know better. The problem is that one tends to become what one is treated as being; and some people might take the illogical leap to conclude that if something does not bear a warning, then it must be safe or even beneficial. After all, if it were harmful, officialdom would have warned us about it.

More irritating, at least to me, than this relatively innocuous sloganeering masquerading as benevolence or concern, that enunciates obvious truths than no one would go to the trouble of denying, are the unctuous messages or slogans that we are now often subjected to. A shop run by the charity Oxfam in my town in England had a notice in its window not long ago saying “Thank you for being humankind.” I am not the brick-throwing type, but when I first saw that notice, I think that if I had had a brick in hand, I would have thrown it, my defense in court being provocation.

The other day I saw a photograph of a poster in New Zealand, apparently in response to the dramatic rise in cases of Covid there. “Stay safe,” it said in very large lettering, “Be kind.” I think this would win a trophy if there were a competition for the most nauseating slogan of the year. Indeed, if I were a very rich man I would fund such a competition, perhaps to be called the Unction Prize.

My advice to readers, in the meantime, is to stay healthy and be nice.