Zelensky: The Symbol of Civilization 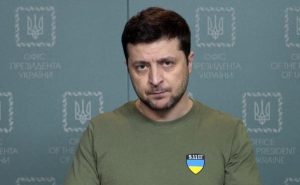 On March 8, 2022, Ukrainian President Volodymyr Zelensky delivered a historic, moving, virtual address to the members of the British House of Commons for which he received a lengthy standing ovation by the audience. He compared Ukrainians fighting today to save their country to the British standing alone more than 80 years ago against the German Nazis.

The speech consciously drew on the famous, immortal, stirring, speech of the new prime minister Winston Churchill on June 4, 1940, that even though large parts of Europe had fallen or might fall in the grip of the Gestapo “we shall fight on the breaches, on the landing grounds, in the fields, in the streets, in the hills, we shall never surrender.”  Zelensky similarly declared, “we will not give up and we will not lose, we will fight to the end, at sea, in the air, we will continue fighting for our land, whatever the cost. We will fight in the forests, in the fields, on the shores, in the streets.”

Ukraine , Zelensky said, was “fighting a war that we  didn’t start and we didn’t want.”  The parallel with Churchill is evident in a number of ways.  Most striking  is the impact of the speeches on the assessment of the orator. It ought to be remembered that Churchill, up to that point a controversial figure even in his own political party, denigrated for his alleged undesirable qualities, reckless, selfish, arrogant , bullying, became  the hero not only of Britain but an inspiration to the civilized world, with emotional display not simply cool logic.

In similar fashion, Zelensky, the previous TV sitcom actor and virtuoso dancer, previously viewed as a lightweight political novice is playing the role of his life but it is one without guile and is one of genuine care.  He has been seen in a series of video updates, wearing olive military  style clothes, speaking directly and clearly to the population with a calming presence. If  his speeches are not eloquent as in Churchillian rhetoric  they are equally passionate as those of Churchill during World War II. Churchill declared  give us the tools and we will finish the job, Zelensky has called for more ammunition, not an escape route for himself.

Zelensky has announced that the enemy has designated him as target number one, and his family as target number two. Indeed, he has survived a number of assassination attempts by the Kremlin backed ruthless Wagner group and Chechen special forces.

There are many unintended consequences of the fighting in Ukraine, but four factors may be indicated. First, in spite of language used about it, the fighting is not a war between belligerents. It is pure unprovoked, one-sided aggression launched by Russian dictator Vladimir Putin based on absurd untruths of  the need to “DeNazify” a democratic country headed by a Jew and dominated by a fascist regime. It is a truth almost universally acknowledged that Putin is not only an autocrat but is also an imperialist, callous, arrogant, and cruel, who has embarked on a path of evil, interested in his own power as well as that of the Russian state.  The crucial factor for him was the collapse of the Soviet Union. “the greatest geopolitical  catastrophe of the 20th century.” In general, he wants to make Russia a great power as in historic times. But his immediate aim is the elimination of Ukraine as a real country, and to make it part  of a greater Russia. Putin is scarcely an ideologist but his outlook is linked to the view that Russia has a mission to unite the Orthodox people whether they are Russian, Belarusian, or Ukrainian.

The second factor is crucial, indeed fundamental, to the international community.  Putin’s aggression increases  every day in ferocity and in relentless  fashion such as using thermobaric rockets. A moral low was reached with the direct strike by Russian rockets on March 8, 2022  causing colossal damage to a children’s hospital and pediatric unit  in the town of Mariupol in southern Ukraine, a scene with badly wounded  patient and nurses, children trapped under rubble, and pregnant women carried out on stretchers. This atrocity was an act of terror. Two consequences were that 3,000 babies were left without access to food or medicine, and residents of the city were forced to bury the dead in mass graves.

The international community must recognize this depraved behavior for what it is.

Genocide is a neologism, coined in 1944 by Raphael Lemkin, Polish lawyer of Jewish descent, when learning of the slaughter of Armenians by the Turks, which has been defined by the UN Genocide Convention in December 1948 as acts committed with intent to    destroy in whole or in part, a national, ethnic, racial, or religious group. It describes the epitome of human evil, the basest moral category. It is appropriate that Putin’s aggression to destroy a national group, the Ukrainians, should be seen and punished as a genocide.

A third factor is that Russia has, with a few exceptions, become an international pariah, shown in diplomatic terms and in social and economic behavior.  Diplomatically, this was dramatically shown with the walkout of delegates on March 8 , 2022, at the conference of the International Atomic Energy Agency in Vienna, the second such demonstration, when the Russian  ambassador began speaking. Russia is being excluded from a considerable part of the world economic system. Culture and food cannot be ignored. Pizza Hut has left the country, and even more important for the hungry, McDonalds has closed all of its 850 restaurants, including  the very large, very popular one in Red Square. Western restaurants and bars are removing Russian vodka and caviar from their offerings.  The Cardiff Philharmonic Orchestra announced it had dropped Tchaikovsky from its program of upcoming concerts.

The fourth factor is that Ukraine is defending civilization as well as itself. Important as Zelensky is as defender of his country, and embodying the spirit of his people, he is even more significant as the contemporary conscience of the world, akin to the role of Emile Zola in the Dreyfuss affair.  Zelensky though grateful for help has been critical of Western countries for a number of reasons, not agreeing to a no-fly zone, or supply of planes he wants and thinks vital, but he is aware that this western reluctance is due to the fact it does not want to take any action that might trigger a world war three. The world should recognize that Zelensky, like Churchill eighty years ago is the symbol of Western civilization.