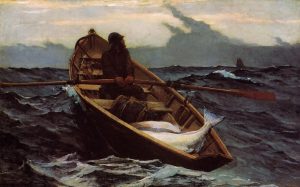 The Fog Warning by Winslow Homer, 1885

A little black boat at sea
In the grey-red current
Without any passengers
Tossed its bow to the wind
As if it were a key
To a bordered extent
Of mystery—messengers
between heaven and earth, twinned.

But the sea answers:
Its length is a lock
Over which prancers
Go from dock to dock.

Yet the little black boat
Kept its bow to the wind
As if it were a key
Till it couldn’t float.
And the sea grinned
With grey-red glee.