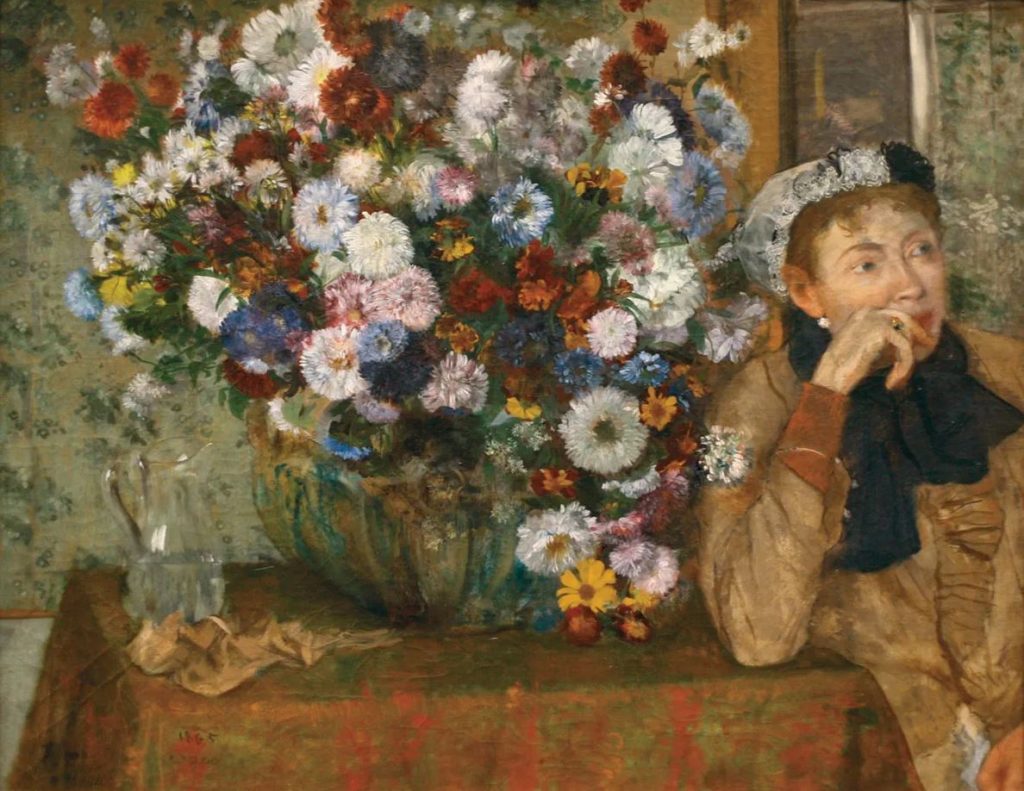 A Woman Seated Beside a Vase of Flowers, Edgar Degas, 1865

Dorothy is a psychotherapist in her late thirties.

Quiet at last. For the rest of the day my door can stay shut. This afternoon, like a budget airline, I double-booked, just when I needed things to be stable, disruption-free. I made the choice that served my best interests. I took the newest, not yet fully committed patient, whose fee was higher. The other—long-range, younger—must have gone away rejected. Can this be undone?

She’s not online. I’ll write a letter, expedited delivery. It’s hard to think this out.

I’m going through a very painful divorce, with a custody fight—lawyers, money. And my closest friend has her diagnosis—a fast growing tumor. No one wants to say terminal.

They didn’t with my mother, either. I think of my childhood on tiptoe—never quiet enough. Did you forget that your mother is ill? As if I could.

I stop myself abruptly. My circumstances are harsh, but I’m calling attention to myself when it isn’t my turn.

Sometimes, though, it seems that if I hold too high a standard I’d have to tear my license from the wall and close my door.

This is a crucial moment for her—departure from the nest. Her parents’ death had placed her with the only sibling, an older sister with a large house and constrained heart, who’s been trying to discourage her from the graduate fellowship that’s about to start. FINE ARTS? That’s for the idle rich. How can you justify it? Besides, you’re still needed at home. (One wonders, where is the other scullery?) Her sister’s perpetual message: not you, me.

I’m glad I stopped myself on that merely self-righteous path: look at the harsh times I’m going through. My own, gentler version of “not you, me”? Whoever said this could be easy—just doing, day in, day out, not mere superimposed validation, but the honest work of a craft whose chief component is loving truthfulness?

My letter to her will be a brief one. I double-booked in error, then made a wrong choice. No excuse I have really puts it right. I hope that you’ll choose to forgive. I’m confirming our next appointment, close to the last one before you leave and your fellowship begins.

I don’t yet know how I’ll manage the finances. I do know that I can’t run an assembly-line practice to address the inner life.

How many times have I said, told—change can bewilder, change can hurt or be slow.

But if life’s chief adversary is not pain but inertia, then this surge-and-throb tells me that I might be doing okay.