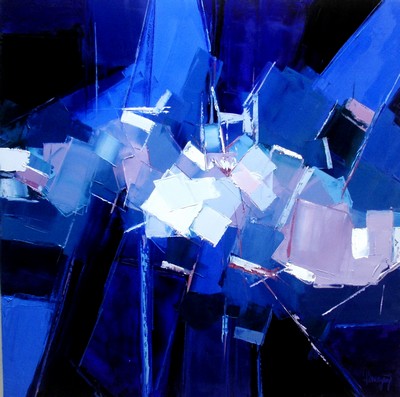 Anthony’s eyes were the sea, azure calm when the wind was still, flaming like a blue-green agate whenever the western gods tormented the oceans and Anthony’s soul, like Ahab’s and his noble adversary’s, was owned by the oceans of the world. Each time his seamen’s spears spewed across the sea barely missing the great white whale’s spume, Anthony’s eyes glowed like sapphires. Each time the ocean tossed or pitched or rolled, Anthony’s eyes grew in luster.

Anthony’s eyes were crystal blue when the sun rose out of the morning sea, and iridescent blue by the time the sun sank beneath the distant mountains. Anthony’s eyes changed hue each time the sunlight was reflected from a different angle or got twisted by an impenetrable breeze—his eyes even watered in a different shade of blueness each time they were struck by the drifting winter winds that blew in from his home at Gloucester on the Massachusetts sea.

Anthony Allen had just turned seventeen when he inherited his father’s fortune and blue blood. He had already inherited the family perchance for fine dining, collecting fine art and screwing fine young men and now he had the means to consummate all three of his dreams.

By the age of twenty-five, Anthony had given up fine dining and chasing after blond, blue-eyed men and devoted all his waking hours to tracking down the finest works of art in the western world. Specifically, he devoted all his time to collecting the seascapes of the masters: Blue Art—since his tastes in art were always for the best and the bluest—like his bloodline, his eyes, and his mood.

On his twenty-sixth birthday, while admiring one of his favorite seascapes, The Wreck of the Hesperus, Anthony said, “There’re only 13,427 seascapes, yet each is so vibrant—so alive—so different. I’d love to own them all.

Six months later, after an exhaustive inventory during which time Juan Jesus Hernandez, Anthony’s accountant and x-lover, had been convicted of slicing off his current boy friend’s left testicle with a machete, Anthony discovered that, thanks to his Dad’s foundation, he already owned 6,329 of all the major seascapes in the world.

From then on, each morning at half past nine, Anthony called his secret buyers and gave them their orders for the day, but no one even bothered to check the auction results. No one realized that seascape after seascape was being removed from the world marketplace. By the age of forty, Anthony owned 9,321 of the masterpieces he so desperately sought, but he knew his voyage on the Pequod would never be complete until he owned them all.

Late one Tuesday afternoon in the middle of February, when the winter seas howled outside his windows and he shivered in his blue silk dressing gown, a morose Anthony sat in the Indigo Room of his nine-story mansion, admiring his latest acquisition, wishing he could stand inside each picture. “If only I could be the man at the wheel,” Anthony thought. “If only I could sit on that rocky pinnacle overlooking the rain-tossed ship on the stormy sea … if only…”

There were no reds or yellows or browns in Anthony’s world. His retina recognized the 47,625 shades of blue—nothing more. He could distinguish the finest nuance between each shade of the blue sea at sunrise and the tiniest fragment of a filament of blue in the early morning mist. He could sense the shades of the intermingling currents of the Great Gulf Stream in the brightest sun at high noon and he could even calibrate the hue and tint of the Mediterranean in the middle of the night.

Anthony took his magical paint box and created his own pictures of his life, but each time he reached within himself, each time he fought to find out who he was and where he was going, he ran short of “just one final shade of blue.”

“I must have them all!” Anthony screamed on the hottest day in August when the central air conditioning had crashed and all the ice cubes had melted inside his refrigerator. “I must own all the shades, if I ever want to find out who I am, I must own the sea!” And so, wishing he could add all the blueness of the sea to the colors of his own life, Anthony decided he couldn’t wait to purchase the rest of his elusive paintings. “If I can’t buy them fast enough, I’ll make copies,” Anthony thought aloud. “And if I can’t make copies fast enough, I’ll hire a thousand artists to copy them for me.”

That should have settled the problem, but Anthony was too much of a purist to let his thoughts end there. “Copies will never do,” Anthony said to the piranha in his aquarium one stormy night in June. “So, I’ll steal the originals; I’ll put the copies in their place.” Anthony knew he could hire the best forgers in the world—that would be the simple part. He also knew he could hire professionals to break into all the major galleries and replace the real seascapes with his ersatz ones. That was easy, as well. The difficult part would be the waiting … and Anthony never waited for anything. Like his father, Ahab, he was too impatient to wait. The domain of the Great White Whale must be his!

“Treasure Island, what brought that up?”

“The treasures it contains … You know, it’s so beautiful, it’s almost like the whole world is covered in an agate colored blanket dipped in a bathtub filled with water as blue as the bluest sapphire.”

“You are prosaic today!” Tabatha laughed out loud. “Get real, sister, the sea is blue. It isn’t sapphire or emerald-gray-blue and it certainly isn’t sapphire … Have you been taking something in your tea?”

“No,” Madeline said, “it’s just that today’s so perfect, the sun’s so bright—oh, I don’t know, I just got carried away.”

“That’s the understatement of the week, girlfriend,” Tabatha replied as she caressed her lover’s thigh.

Rebecca and Charlie were spending their honeymoon in China. They’d climbed the Great Wall, taken the Grand Canal cruise, visited Shanghai and Beijing and marveled at the Terra Cotta Warriors in Xian. Now they were perched high atop Peak Victoria in Hong Kong, eating at the most exciting restaurant in the world as they admired the vast expanse of the city and the sea beneath them.

“What’s the most beautiful thing in the world?” Rebecca asked.

“You are,” Charlie replied without hesitation as he gently took his bride’s hand and kissed her on her lips.

“Besides me, what’s the most beautiful thing in the world?” Rebecca asked again.

“I’d have to think about that,” Charlie laughed, “there aren’t too many things that could compare to you.”

“You’re too sweet, Charlie, but get serious for a minute. Look at the harbor. Isn’t that the most beautiful thing you’ve ever seen?”

Charlie snuggled up to his young wife as the two of them admired the view. He gently kissed his wife’s left breast and then, together, they reveled in the sight of the blue waters consuming each other, rapidly rolling, turning, twisting, meshing into one enormous kaleidoscope of blue. For a moment, Charlie lost himself in the sight, smell and taste of his new wife as the turquoise sea overlapped the teal and royal blues and rippled south toward Macao. But then the newlyweds watched as the current gently rocked the ships and ferries in the harbor, eight million lives below them, mesmerized by the sight of the blue green sea.

Charlie and Rebecca sat in that small restaurant for three hours, watching the sun’s reflection change the water, watching the waters darken as the clouds slowly drifted overhead, watching their world change from light to darkest blue. They waited until the harbor lights were turned on and the blue faded to indigo. Violet. Black. Charlie paid the bill and  then he and Rebecca strolled down the ramp to the funicular, praying they could have had just one more day to visit Peak Victoria and watch the harbor as it played its magical game.

By early autumn, Anthony had gathered together several hundred art forgers so surreptitiously that no one knew of the existence of the others. Not even his executive assistants knew his plans. Except for his stature and his blue eyes, he was Napoleon, on his way to conquer the world.

Initially, Anthony only had to destroy fifty-three of the finished products. His forgers were that good! He set the months of March and April for the exchanges. It was then that his hirelings would rob the great galleries of the world and replace their works with his forgeries. This was significantly easier than it seemed. Most of the great works of art were held in private collections or in poorly guarded ones. Less than two percent were protected by anything experts would call even mildly sophisticated. Besides that, Anthony had learned that a little bribe would go far to ensure that a guard would miss a particular duty or take an unexpected, unexplained break.

So, by the end of April, Anthony had amassed all 13,427 seascapes, which were just enough to fill his 1,217-room mansion from stem to stern.

Each day he wandered up and down the galleries of his home, admiring the colors, absorbing the shades into his eyes, filling his soul with their light. Each day as he stood before hundreds of seascapes, he literally merged with them, becoming filled with their strength.

No one but Anthony noticed the changes at first, no one noticed the subtle innuendo, the nuances of his eyes, his subtle mood changes. No one saw his soul as it took on an aura all it’s own.

“What did the astronaut say while standing on the moon?” Anthony wondered aloud one day as he looked at a massive seascape of the coast of Maine. “‘The Earth’s a living planet, drenched in blue—unique in the universe,’ was that it?” Anthony asked himself as he absorbed the last four colors of the final paintings in his collection.

Anthony’s eyes flashed from indigo to violet to royal blue to navy to all of the 358,178 shades of blue in between and Anthony became Whistler’s and Edkins’ paintbrushes as he became their seas. He was full. The Pequod had sunk. Ahab and the whale were dead and the oceans were his. For the first time in his life, Anthony was satisfied: The oceans belonged to him.

Rebecca and Charlie were home in New York, looking out their fifty-second story window admiring the Hudson when the blues began to disappear.

Madeline and Tabatha were making love along a desolate beach in Southern California when the sapphires, indigos and aquamarines faded and disappeared forever.

And the bluer Anthony’s eyes became, the more the seas darkened and the seas turned gray and black forever as Anthony became the sea.

Scot Walker has been a writer and poet for many years and is a member of the Dramatists Guild. His work includes These Forty Years Have Flown So Fast, Poetry by Scot Walker, Winston Churchill’s American Cousin and Other Tales and over 30 published plays, as many short stories, and several novels. He is a retired English teacher. He gave a dramatic reading of The Last Dragon Dance in 2007 in Lhasa, Tibet.