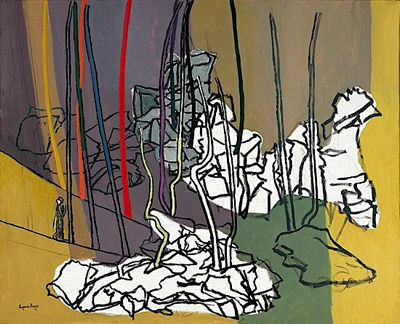 Months passed and summer arrived. We went to see fireworks at the house of an important art critic. The man was a poet in his youth but gave it up for art criticism. He had a nice estate with a brook running through it. I don’t have my rivers straight or I would give it a name. The rivers in the Catskills meander, following the upheavals of the mountains formed when the tectonic plates crunched together, and parts of Maine through Georgia were thrust up.

The party commenced at five o’clock. It reminded me of Woodstock. There is a summery quality at that time of year (the wistfulness of high summer) and many New Yorkers are used to coming up for camp and vacations even though the evenings can remain very cool. You hear Brooklyn and the upper West Side in voices. There are Romanian and Spanish and Jamaican voices. There was lots of aerial bombardment as the fog drifted through the valley. Orange day lilies in the gardens. I saved a slice of blue cheese at one point so as the fireworks went off in the air they would also go off on my palate, while my kid looked up in the sky. I drank part of a beer since there was nothing else to drink. I had been raised as a Lutheran, but from some branch of it that did not allow drink. We were temperance fiends. Growing up, I only had Velveeta Cheese. Now there was all this weird cheese from France and Holland and Denmark. It was all good.

Read more in New English Review:
• La Mer
• A Theory of Astrology
• Wilted Laurels (or, a Sad Ballade to our Poets Inglorious)

Several thousand people milling about and there was a potluck beforehand which featured organic and vegetarian dishes as well as men working a grill to provide hotdogs and hamburgers. I had peanut butter covered noodles and a cookie. My wife, dressed in a beautiful electric blue shirt, had a cheescake. I also had an electric blue shirt with a Nehru collar. Were we trying to look like the Beatles in Sergeant Pepper? I let her dress me at public events. Before the fireworks, children played in the brook. If you stopped and spoke with someone, they were usually artists, and often internationally known. That night we met a magician who’d been working off Broadway for 16 years. He bent quarters and did card tricks for my kid and wife for a half hour in what amounted to a private show. He majored in business as an undergraduate and had been able to market his magic. My son Falstaff said, “Awesome!”

The fireworks began at 9:40 pm. They only lasted 13 minutes. The party began with a group singalong as the hippies and artists haltingly tried to find the words to the Star Spangled Banner as paper lanterns drifted across the sky:

O say can you see by the dawn’s early light,
What so proudly we hailed at the twilight’s last gleaming,
Whose broad stripes and bright stars through the perilous fight,
O’er the ramparts we watched, were so gallantly streaming?
And the rockets’ red glare, the bombs bursting in air,
Gave proof through the night that our flag was still there;
O say does that star-spangled banner yet wave,
O’er the land of the free and the home of the brave?

The song reminded me of 1968, and the valiant fight against war, against the Vietnam War in particular. It reached back into other wars—the Korean War which saved the southern peninsula from Kim Sung-Il, World War II (which saved what was left of European Jewry from National Socialism), the first World War, The Spanish American, The Civil War, and the American Revolution as well as the War of 1812 in which America was saved at Fort McHenry. Frances Scott Key penned his anthem from a ship that was stuck watching the battle. It was now sung before many important sporting events but only very rarely at cultural events as most of the arts community wanted nothing to do with patriotism. They were globalists, and found the idea of patriotism to be something to snigger about, like having some kind of vestigial tail. The concept of a Just War was foreign in the arts community as their memory doesn’t go back beyond the war in Vietnam, and they were certain that Vietnam deserved to go communist, but I knew better. The Communist Chinese had underwritten the North Vietnamese, just as they had underwritten the North Koreans, and the result in both cases was a human rights disaster. The Communist Chinese had themselves gotten into power because there were communist sympathizers in the State Department, including the horrifyingly backward poet Charles Olson, who had inspired a generation of socialists with his gibberish. He had come out against Chiang Kai-Shek in The Maximus Poems. I was for Taiwan, and missed the days when everything was made there, instead of the human rights hellhole of contemporary China. Tibet had been destroyed by the communists. I was for all the backward religions, and preferred them to everything secular. The hippies were globalists, not patriots, and the song to them was kitsch.

As soon as the song was over the blasting began. Jimi Hendrix’s version of the song at Woodstock played in my memory as star-shaped boomerangs zig-zagged and crisscrossed the canvas of sky. I stood with my hand on my heart thinking how Barack Obama would not salute America, and his wife hated America until her husband was president. Everything about the Democrats was sick. We should have won in Vietnam! Just as we defeated the imperialistic English king, the Nazis, and the Soviets! Wasn’t Vietnam now a soggy mess with universal prostitution? I’d never seen the important critic and few at the party knew him. Recently the Great Gatsby was refilmed and in it you could see the reclusive gentleman putting on fireworks displays. Like Gatsby, the art critic had grown up in the Dakotas, and like him, had made it in New York. Unlike Gatsby, who sold drugs, the art critic sold explosive insights. If he had grown up in the Dakotas, he would have had Republican relatives. Because he lived in New York City, and wrote for The New Yorker, he was almost certainly a Democrat.

The oddest tip of Uncle Sam’s hat to America were the peaceful lanterns that went up first. When the blasting began you got trees exploding in ways that resembled napalm and yet were just a tad too glitzy and thus pulled you out of the mayhem and reminded you of a magic show. The sky was lit with bombardments but there was something Disneyesque about the reenacted bombardment. Flak exploded from bushes in spectacular firefights. Tracer bullets reached for something significant perhaps a dirigible, perhaps a Mig screaming in, and then exploded into oceans of green light.

It was more than just a light show. It was a question mark about American violence and the paradoxical way in which it had secured American peace. Violence founded our nation in ambiguous freedoms that included the right to blow things up, to own a gun, to stand your ground. My wife was a Finnish woman and they had a far less ambiguous relationship to patriotism. Having fought fifty wars against the Russians they were a small but tough people who had never caved into Russian or Swedish imperialism. In the Winter War and the Continuation War it cost them a quarter of their population and a third of their land. They did not have an angry counterculture. Finland is one thing: a fist in which every part was pulled together and ready to strike. America on the other hand is a scattered nation that had nothing to unite us but spectacles citing long-ago invasions, and two separate factions at each other’s throats.

PrevWilted Laurels (or, A Sad Ballade to our Poets Inglorious)
The Welfare StateNext