Moral Writing and the Sound of One Hand Clapping 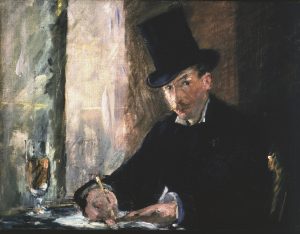 “It is immoral to deny reality.” —Hans Durcher

It certainly is immoral to deny reality, as it’s easy to see how much damage this can do. Nowadays the wreckage surrounds us. Yet our language does this at its most elementary level. As soon as I voice the word, “orange,” I have already prioritized our attention away from infinite other objects which also constitute reality. (To garner even more attention, and to fine focus the attitude I could have said, “Ukraine.”) We deny so much reality simply by thinking—and then by opening our mouths. The truth of reality is slanted when uttered.

Furthermore, reality is widely believed to be based on a dialectic, a yin and yang collusion of opposites that comprise the truth, such as if we eliminate one, the other could never exist. So reality is like a conversation. We might think of reality as the dialogue reply to our thinking—which may or may not be applause. A human thinking, or more to our point, a writer thinking is much like the “sound of one hand clapping,” alone within his pinched circumstances, late at night as the midnight oil burns as he imagines a vast rolling sea of applause, that is the other hand responding in to his scritch-scratching! Surely, this “’tis a consummation devotedly to be wished,” by our hapless scribe, but nevertheless is a bull’s eye often missed.

So, like humans, the language is born into error. By being unable to discuss opposing views at once, rather like not being blessed with binocular vision, the language slants our truth from its first utterance.

A corollary might be, that if we want to accomplish anything by becoming organized and focused, we’re going to have to morally ere, that is, to sin. This is probably why virtue sits so still as if in church. Life, and its flesh, will demand trade-offs. We’re going to have to get our souls dirty and let ourselves wiggle a bit in order to comprehend enough reality, even if fuzzily, to survive. (It may be useful not to realize this until the task is complete, the article posted, and we go in to wash up before lunch.)

A reasonable person would certainly object, “Oh come on now. Doctors and lawyers and engineers and scientists, business people and mechanics have all had to do quite a bit of study in order to understand what they are doing, and how to go about it. And they use words to discuss with others how best to go about it. Are you suggesting that what they have learned and share could just as easily be false—or in fact, probably is at least not quite right? Or that they don’t know anything?

And here, a Foucauldian conviction feeds the paranoia— “Truth is a function of social power, and not the other way around.” But would you really rather have a powerful political figure such as the President of the United States and the Speaker of the House look over your car, or have it fixed by your local mechanic?

I prefer Thomas Sowell. Thomas Sowell notes: “There are no solutions, there are only trade-offs; and you try to get the best trade-off you can get, that’s all you can hope for.” When our skilled lawyers, doctors, engineers and scientists, etc. use words to generate solutions they are utilizing the mind’s best trade-offs, I would garner. For example, in lieu of a universal truth, they might settle for a focused notion with some “cash value” and a shared idea of what something like a “gear” or “crankshaft” means. So, words perhaps are not simply thought vectors but are naturally little poems of legislative solution and so are in a sense binocular. Things might not be as philosophically bleak as I have made them first appear.

To quote the philosopher William James: “To understand truth, we must consider the pragmatic ‘cash-value’ of having true beliefs and the practical difference of having true ideas.” In other words, the “cash value” of the truth would be in its practical solutions, but there are no solutions, according to Sowell, but only trade-offs. So the truth is a trade off, or perhaps a poetic meaning which has been latched upon and made practical by becoming a portion of the standard knowledge base. We might well describe words as such. This is sounding much more like the world I inhabit.

Morals are also those portions of a reality derived of trade-offs which have defined and been acknowledged as like “solutions.” Moral, is defined online by Oxford Languages as, “a person’s standards of behavior or beliefs concerning what is and is not acceptable for them to do.” When a professional professes to adhere to the highest moral standards, we assume them to be skilled as they are insisting upon adhering as near to the newest accepted knowledge base as we can find. So we are generally in line here with the common understanding and back on the reasonable path, for it is allowed that doctors and lawyers and engineers and scientists, business people and mechanics could very well be honest, skilled individuals and know what they are doing.

How does someone judge which is his right and which his left hand? How do I know that my judgment will agree with someone else’s? How do I know that this colour is blue? If I don’t trust myself here, why should I trust anyone else’s judgment? Is there a why? Must I not begin to trust somewhere? That is to say: Somewhere I must begin with not-doubting; and that is not, so to speak, hasty but excusable: It is part of judging.—Ludwig Wittgenstein, On Certainty

Therefore moral writing is a question of trusting its judgment via practical solution.

Nevertheless, there is still much room here for the devil’s work.

But we didn’t just eat the apple,
we cooked and fermented it
and woke up with mud
on the one side of our face
and stars on the other.
—Eve’s recollection

Just like Adam and Eve after taking a bite off reality and being tossed from Eden, there were ever more sins to be had! Once other people appeared, the opportunities for misbehavior increased exponentially. People began to party! And in order to not be left behind as one hand clapping in this growing land rush a writer needed audience—or at least a friend or two.

For this to happen though, the writer must first be interesting—which opened the door to all sorts of demons.

For example, a recent online posting in The Federalist, “How Twitter Contributed To David French’s Destruction Of His Own Character,” the writer Aaron M. Renn notes that “French ended up in a flywheel in which more extreme rhetoric gets him more attention, which then draws more attacks, which leads to even more extreme rhetoric.”

Each of these incentives, if aligned, can merge into an overwhelming force that pulls some or even most of us down a path that we didn’t expect and perhaps should even avoid. The effect of destructive incentives dragging someone into bad behavior can be found in the increasingly unseemly (and most likely unwitting) behavior of a once-respected writer and man: David French. —Aaron M. Renn

A Facebook friend recently posted an excellent book review, which also dredged up a few recriminations: “Unfortunately for me it also resurfaced the embarrassing memory of a snotty book review I wrote when I was in my 20s for the late great Baltimore News American. I’m still ashamed of it because I know my purpose then was not to write a fair piece but to try to pass myself off as clever by sneering at someone who had worked harder and accomplished more than I had.” Relatively minor moral indiscretions can prey upon a scribe’s soul for a lifetime.

My mother, in her later years, claimed an opportunity to write the Crime column for the local Valley News. Her distinctive voice and wry style helped make a popular column even more so. She reveled in the recognition, until one day the urge to embellish became too much for her. Realizing in the cold light of the next day that she had allowed a fabrication to be published, she emailed the editor her profuse apologies. She didn’t know what had gotten into her. While, in truth, the devil had made her do it, and her editor didn’t make much of it and left her to go forth to sin no more. My mother continued on, but severely chastened. Anyone who has ever told a whopper can sympathize with the temptation involved. Watching (or even imagining) an audience’s eyes widen and their interest peak can fertilize the charlatan and loosen the tongue in many of us, when, in retrospect, tasting our own unsavory character is sure to be sour.

Even fiction writers are not jurisdictionally immune from foul temptations. These artists already prowl those loosely parsed areas between the village gossip, the local journalist, and a daydreamer with artistic expectations for the blockbuster. The creative mind is idle fingers on the keyboard and prone to do the devils work. There are a dozen ways in which fictional scribes can impugn others, or mischaracterize events, situations, locales, communities… and nearly everything that swims, walks, runs, or flies to garner interest. Let’s face it, the fictional world is a writer’s tyranny and power corrupts. The real problem the fictional tyrant has is that real people either might notice, or take umbrage. But, of course, there’s always shelter from accusations of defamation in the author’s sniffy retort, “Do you not know what fiction means?”

The writer’s visibility is audience (market) driven while – meanwhile and On Beyond Zebra – so is their credibility. A writer with aberrant ideas and low ratings is often cancelled as “a fucking conspiracy theorist,” no matter what the realities.

To have great poets, there must be great audiences. –Whitman

Chasing writerly virtue is like tearing the petals from a daisy. We can assume that writing morally matters very much to you, but it may have little effect upon whether you are loved or not—or even heard. You can try, you should try, but the times and eventually history will decide. Caveat Venditor.