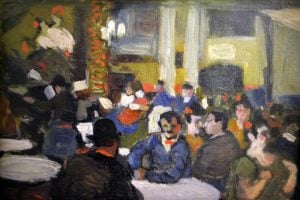 A library ‘was’ a terrifying and magical place (sadly, an albatross destination currently). Terrifying, as one realized the breadth of human thought and progress; magical because there were so many books and periodicals one could ‘discover’ there. For research, the home encyclopedia collection could not compete. You had to plan a time to visit—it was not as handy and quick as today’s online search capabilities. But the sheer number of books overwhelmed.

I don’t know how many times you would go in looking for one thing and come out with three or more other totally unrelated books.

A library allowed a kinetic experience with a knowledge base. One had to physically walk and reach for books on shelves. Searching by author and subject yielded different results. And the beauty of the experience was that one could veer off-subject completely and dive into worlds unknown. The sections that you did not come to investigate would silently call your name. And before you knew it, fiction and non-fiction mixed and you would be reading things in which you thought you had little or no interest. You became more rounded and aware of your world. I maintain that this is no longer possible in our digital age and that chance gains, which could lead to self-improvement, an enlarged world view, scientific and social advance are being limited: we are losing an essential component of our humanity.

A fascination and favorite pastime of mine for many years was the mechanical pinball machine. You could try to ‘work it’ to force a specific route for the ball, but at each pull of the plunger you had little control over its track. Not only did the kinetic effect transfix you—apart from the multiple flashing lights and general cacophony—you simply loved it because you didn’t know what to expect at every pull. Things could be exciting; it was a challenge. It consumed your time and made you forget everything. It made you pay to ‘learn’. It was addicting. It was, in a way, a serendipitous game and pastime…

And many things are like this: a chance encounter, a book at a library you had never considered, a walk through a foreign land, a find in an attic, etc. Serendipity has been at the core of several key medical and engineering breakthroughs, a few of which include the microwave, penicillin, mauve, the strikeable match, Vaseline, and Viagra.

It has been happening for several years now. Before Twitter even.

The first sign that we would all be searching for information that suited our specific interests alone was the change from newsprint to online news. Channel and source content could be selected. It meant that any extraneous news, that which you didn’t bother with which you were annoyed, could be filtered out completely.

But it was different before the internet and news feeds. It used to be: you would open your newspaper and follow the headline that most interested you. Then by chance you would scan other adjacent articles that had nothing to do with the ‘main story.’ This meant you would get a glimpse of other aspects of the world, culture, business, and local events. You would read other opinions and takes on current events. You were exposed to many different ideas in this way and could form a reasonable mind set. Your thinking and even goal setting would be better informed. More or less.

The large circulating newspapers were voluminous in their content. Social issues, government programs, arts, business deals, etc. You could bounce around all day and learn something unexpected. It was a condensed library of sorts. You felt like you had enlarged your worldview. You might have picked up ideas to build up yourself intellectually, morally, economically, and socially. You could weave together seemingly disparate bits of information to come up with something really special. Unique.

But due to years of a mindset of academic specialization at least and political tribalism, we seek only that with which we are familiar and want to be secure about. We are content to listen to our own prophets, who essentially smear all opposing views. We don’t wish to hear ‘the other side.’ This can be from the left or right. Epistemology is not a typical search term and has been completely abandoned by the new interconnectivity and choice to follow only that which you want to hear. There is little effort to parse opinion from fact. Even the ‘fact checkers’ are biased.

The internet is an open book though and yes if you really wanted to see what ‘the other side’ is preaching, you can simply click on their channels and feeds. But even this simple action looks to be waning as the diametrical opposition of thought has been too much to bear. We are now able to comfortably settle into our own safe place of bias affirmation.

There was a time when there were few automobiles, scarce public transit, and the concentration of people lived in urban areas. Sociologists told us that the ability to meet strangers, to not only relate to those in your own crowd, meant that ideas, impressions, and particulars had an effect of improving education and culture. It meant that important ideology and philosophical thought could flourish and gains were made in the arts, business, and science.

After all, the big tech giants today—well before Covid—had campuses that encouraged the cross pollination from different departments and specialists in order to improve the general thinking and output, hopefully yielding a better product and service. The outcome was hoped to encourage innovation and discovery. For profit of course.

(I want to interject that the infrastructure of subdivisions have also narrowed the minds of their inhabitants by eliminating the serendipitous meetings of others of dissimilar economic, political and social thought and status).

Some of the greatest social, political, artistic and philosophical progress occurred in the open cafes of Paris (and other like venues worldwide), a concept introduced by Marc Sautet. His system, based in a relaxed and open atmosphere was “a way to enhance their thinking. Ideas are thrown out with concern for accuracy and philosophical rigor. The concepts discussed were in the spirit of tolerance and openness.” https://en.wikipedia.org/wiki/Epistemology

This notion was a sort of evolution based on the free exchange of news and political/philosophical development originating in the Greek Stoa. We have very little of this type of interaction now in our modern lives. The commercial mall is a pitiful caricature of the Greek stoa or freewheeling café or speakeasy.

Computing in science and business, especially when isolated, makes it less likely to advance knowledge, process, productivity, interconnectivity, etc. Yes there is texting and email, but years before, the mere gathering of people around the water cooler, coffee pot or copy machine meant an opportunity for thought exchange through personal interaction. Installing an ‘open office’ was even considered a positive progressive act. Meeting peers or coworkers in elevators, in the restaurants and bars nearby meant a free and clear transmission and exchange of positive and negative discourse. One could learn tips and strategies, how to deal with other departments better, how to move up in the ladder, etc. A small verbal exchange, unanticipated, could even lead to a breakthrough of some kind.

In architectural offices at least, before computers, the drafting area was open so that the experienced and the novice could share technique, compare progress, get instant feedback, learn how to do better. The same effects could be found in many other engineering and medical environments that were open to face-to-face communication and the quick and direct exchange of thoughts, facts, processes, and emotions.

The university model, originating in medieval times, has been transformed now into a campus of specialty niche departments with students totally ignorant of what others in different fields are learning. And now there are students from grade school through high school who are allowed to learn completely online with little to no outside contact. What skills exactly are they able to absorb and build on in this manner? For the grade school children, the verdict has been abysmal during the recent pandemic. The future does not look promising using computing alone.

Digital communications (and all that it entails, including the social media and learning software), as wonderful a tool as it is, has negative side effects that were unanticipated. Now, not only are we lagging in the engagement of philosophical skepticism, but we are close to being completely censored in expressing base opinions that counter a narrative developed by the controlling political/ tech powers.

Twitter and many like social media outlets, were originally formulated on an altruistic basis, yet tempered by capitalist requirements to be economically viable. The early conversations were quite a bit more civil than now, much like those encountered in 19th century cafes. One could banter back and forth and in finding a differing opinion, formulate an argument to either confirm one’s own point of view or discover that yours was erroneous.

However, this open field led to vile postings and imagery that had to be removed.

The enjoyable chance interactions online, as serendipitous as they might have been originally, appear in time now to be so fearsome and misinformative on key facts that our government now wants to make sure that ‘truth’ prevails and so now thought and speech of all kinds are projected to be controlled through an Orwellian clearinghouse.

This is forcing of course, everyone to search for their own echo chambers with a vengeance. We will find the people and groups that appeal to us the most, and to hell with the other side. The “spirit of tolerance and openness” lost. Technology and science seem to have also been infected with a horse blind mentality to keep out that which is deemed unwise or politically charged, which is indeed going a step backwards. When serendipity is lost, humanity suffers.