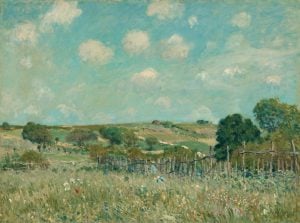 We are almost near to where the winds blow,
Where to lust is hard, and to love easy,
By the gate of the garden where fates grow,
And look up—the watchtower is empty!
But I wonder whether or not the gate
Will open—given it’s so very late:
Whether if we knocked, we would be answered,
Whether what we have to say would be heard.
Yes, will it have been worth it? worth our while?
Certainly, I can say—I’ve been assured
We’ll be met at the least with a near smile.

Do you remember how our star would glow
When we had lost our way in the valley?
That middle blue-black light that used to show,
Yes, I remember it—thought not clearly:
Metal wrecks of mountains, gloomy and great,
Seemed to float in it in spite of their weight;
Yes, we’d seen, or seemed to see, a bluebird,
For a moment, pay reverence—fly backward.
But that was far aback, many a mile,
When you and I—when we had still concurred,
We’ll be met at the least with a near smile.

I do not know where we or the winds go:
Whether they go to where they do to flee
Or whether there’s a home I do not know
Near or on the other side of the sea.
But the way they go—that I can locate:
They wander our hair, though their paths are straight.
Yes, you and I are—as we were, wayward.
But don’t be upset: it’s not so absurd
That we two should make our way in this style:
Though we have lost our breath, and have blundered,
We’ll be met at the least with a near smile.

Look, the garden is near; the sun is low;
There are the scents of flowers, of a tree
On the wind, whispering of faith and woe.
And though it’s very late now—can you see
Our father? Once, I saw him by the gate
With wild hair, his eyes seeming full of hate.
And there was a strange quiet, nothing stirred.
But then he looked on me, and gave a word,
Lovely to a little child in exile;
But I’ve told you, cheer up—let’s go onward:
We’ll be met at the least with a near smile.

Heaped up stones that stand, noising seas that flow,
A honey-laden hive, a busy bee,
Sun-basking clouds, silvery banks of snow:
Yes, there’s all that, and there is you and me.
We will wander all the hour—and will wait,
Find in time the garden where grows our fate;
Yes, by a sunken star we have suffered,
The winds have come—and utterly conquered;
The watchmen have rent the veils from the vile.
And though in our cares our brows are cankered,
We’ll be met at the least with a near smile.