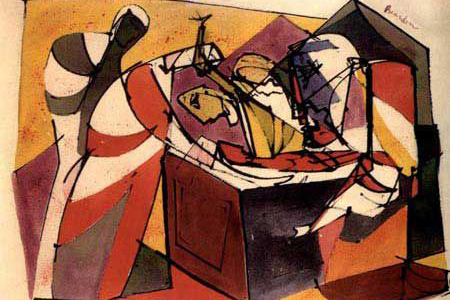 You Are Dead Forever, Romare Bearden, 1945

Robert Lowell called Randall Jarrell “the most heart-breaking poet of our time,” that time being the twentieth century. I assume he was referring to the nature of Jarrell’s early death at 51. From my point of view, however, the most heart-breaking poet of that time was Trumbull Stickney, although he barely made it into that century, dying in 1904 of a brain tumor. Born the same year as Robert Frost, 1874, good god how he would have changed literary history had he had, like Frost, 63 years of life in the twentieth. I’ve told Stickney’s story before (Demoting Wittgenstein, Mourning Trumbull Stickney) and more recently have reflected on Jarrell’s probable-to-certain suicide (Random Thoughts on Randall Jarrell). And pardon my insensitivity, but choosing to cut off one’s productive life for any reason other than finding life unlivable after the death of the beloved I find maddening rather than heart-rending—and just not comparable to the heart-break of Stickney’s body in murderous rebellion.

But if we’re talking about the composition of heart-breaking poems, my tone toward Jarrell changes radically. I commented recently on the greatness to near perfection of perhaps Jarrell’s two most celebrated poems, “The Death of the Ball Turret Gunner” and “Next Day.” The richness and precision of the first is amazing.

From my mother’s sleep, I fell into the State,

And I hunched in its belly till my wet fur froze.

Six miles from earth, loosed from its dream of life,

I woke to black flak, and the nightmare fighters.

When I died they washed me out of the turret with a hose.

It’s extraordinarily moving, yes, capturing as it does the brevity of life of young warriors sacrificed in war. But—no adverse criticism intended here—such a rich and compacted allegory, demanding the reader unpack the startling metaphors and symbolic associations, does like all allegories (such is the nature of the genre) make its demands primarily upon the intellect rather than the unfettered emotions.

Read more in New English Review:
• Max Bruch, Die Loreley, and the German Romantic Tradition
• The Welfare State
• Are We Really in the Back Row?

The woman in “Next Day,” thinking about a friend’s funeral while fulfilling the quotidian task of grocery shopping, cannot help but associate matters with her own likely fate, that fate being not only death itself, but a judgment upon her own terribly ordinary life.

I went to yesterday.

My friend’s cold made-up face, granite among its flaws,

Were my face and body.

As I think of her I hear her telling me

How young I seem; I am exceptional;

I think of all I have.

But really no one has anything. I’m nobody.

I stand beside my grave

Confused with my life, that is commonplace and solitary.

Also moving, this monologue. But unless one is an extraordinary person, one of God’s Elect so to speak—as I would be embarrassed to claim to be!—one is probably thinking just as much (or more!) of oneself as of the narrator and being moved primarily by one’s own fate.

Jarrell’s most purely heart-breaking poem, it seems to me, was the introductory poem to his most heart-breaking book (my judgment), Losses (1948), in which so many of his World War II poems were collected—but not a war poem itself. “Lady Bates,” which I have never seem anthologized; it if ever has been it’s been decades. And that’s a disgrace and I think I know why. In any case—to make up for its relative unavailability—here it is.

The lightning of a summer

Storm wakes, in her clay cave

At the end of the weeds, past the mock-orange tree—

Where she would come bare-footed, curled-up footed

Over the green, grained, rotting fruit

To eat blackberries, a scratched handful—

You have played too long today.

Is it a dream

Like the ones your mother used to talk away

When you were little and thought dreams were real?

There are no more dreams, no more real—

After this stanza the reader senses that little Lady Bates, treated verbally so tenderly by Jarrell, is no more. But he or she is nonetheless not quite prepared for the next stanza.

Heard about you, Lady,

They smiled all over their faces

Is it you, the little Lady Bates

Our minister, one Sunday evening,

Held down in the river till she choked

With the clay of that red river? Lady,

Where are the two we sent to fetch your soul:

One coal-black, one high-yellow angel?

Interrupting the stanza briefly: the reader now knows Lady Bates was a black child—although it is not clear that she drowned while being baptized as some critics assume: it strikes me as ambiguous. Continuing:

Where is night, where is day?

Where are you, Lady Bates?

And they lost you here in the cuckoo’s nest

Eating the sweet white heart of the grass. . . .

You died before you and even had your hair straightened

Or waited on anybody’s table but your own.

You stood there helping your step-mother

Boil clothes in the kettle in the yard,

And heard the girls go by, at play,

Calling to you in their soft mocking voices,

After this stanza, anyone not in love with this child has no heart. I know that years ago on my first reading I teared up, and I know that Jarrell did too.

There is a bed of your own

Here where a few stones

Stick up in the tall grass dried to hay—

And one willow, at the end of summer,

Rustles, too dry to weep for you,

And the screech-owl sheers away

And calls, who, who—you are afraid

And he is afraid: who else could see

A black ghost in the dark?

Who haunts no one—who lies still

In the darkness, waiting

While the lightning-bugs go on and off?

Have sewn up your eyes.

If you could open your eyes

You would see nothing.

Interrupting briefly: The reader does not believe Lady Bates was a bad girl and justly punished, and is pleased—and saddened—that death was all a mistake. Continuing:

The wind has blown you away forever

By mistake; and they sent the wind to the chain-gang

And it worked in the governor’s kitchen, a trusty for life;

And it was all written in the Book of Life;

Day and Night met in the twilight by your tomb

And shot craps for you; and Day said, pointing to your soul,

Here I interrupt again, promising to tell you shortly what Night said—but also to insist that when Day calls her “bad” the tone tells one he doesn’t mean bad but rather a tender kind of baby talk that any parent can recognize. Now to the concluding stanza:

But Death, after the habit of command,

Said to you, slowly closing his hand:

“You’re a big girl now, nor even afraid

Of the dark when you awake—

When the day you sleep through

Is over, and you awake,

And the stars rise in the early evening

An inch or two over the grass of your grave—

Try to open your eyes;”

Try to reach to one, to the nearest,

Reach, move your hand a little, try to move—

You can’t move, can you?

There is no taunting here by Death: he is not flaunting his power as if to say “Hah! You can’t can you!?” but rather is himself moved as if to say “Sleep little one. Peace.” Now I’ll tell you what Night said when I interrupted:

This isn’t exactly Jarrell using the “N-word” (Heaven protect us!). It is Night, at the hest of the Father, Son, and Holy Ghost, and perhaps the coal-black and the high-yellow angels speaking a dialect appropriate to the occasion.

I find “Lady Bates” heart-breaking, yes, and a poetic achievement. I stopped reading literary criticism of “Lady Bates” years ago when one critic found it an exercise in “Southern gothic” and “sympathetic in a paternalistic way to its subject” (I suppose because a Southern writer could only be paternalistic toward a black?), and another thinks Jarrell “seems to mistake pathos for compassion” (one really has to be insensitive not to hear the compassion!) and charges Jarrell with an “inability to apprehend the reality of his subject” (which means I know not what!). So I am content to read again and again this beautiful, tender, loving poem with no further comment . . . save the following:

“Fools rush in where angels fear to tread.” Alexander Pope was quite excellent on fools. In a sense his Essay on Criticism was a study of them, especially the intellectually arrogant, whom he captures in the couplet “Go, teach eternal wisdom how to rule, / Then drop into thyself, and be a fool.” I’m sure it says nothing good about my character that I confess I take a positive delight in the politically correct foolishness of the scholar who would revise for all the proper reasons and thereby morally improve the language in the artistic work of the literary genius. For instance the editor of a 2011 edition of Mark Twain’s Huckleberry Finn, in which Huck’s friend Jim is never referred to as “nigger” but only as escaped “slave” to avoid offending black and white snow-flakes: this editor an English professor whose name I will omit in an act of courtesy he does not deserve. The old lit-crit rumor that Huck’s and Jim’s relationship was basically homosexual (“Come back to the raft, Huck honey”) was, while absurd, at least funny. But the spectacle of editors dropping into their foolish selves is a drama devoid of humor.

Read more in New English Review:
• Wilted Laurels (or, A Sad Ballade to Our Inglorious Poets)
• Gratitude and Grumbling
• The NPC Meme

Related to this nonsense. . . . Well, let me back up a moment. I’ve seen two great Othello films in my life. Laurence Fishburne was magnificent in 1995 playing against Kenneth Branagh’s extraordinary Iago (the best Iago ever, by the way); I’d bet my life Fishburne studied especially Laurence Olivier’s 1965 Othello—and I doubt he was in any way offended by Olivier’s disguise as an African. In any case, the officials of the Metropolitan Opera, who might have felt different about Olivier, announced in February 2019—after the revelation that a Virginia politician had donned black-face as a college prank years before—that whoever played the title role in any Met production of Verde’s Otello, if a Caucasian, would not offend anyone’s sensibility by wearing black-face. How very, very precious!

The chances of a reader of NER being an emotionally wilting snow-flake are slim, so I probably will not enjoy some fool’s suggestion that Jarrell should have written “Poor little African American girl.”  If context is not “all,” it is the very next thing, and in context “Poor little nigger girl” is perfect: to miss its tenderness and broken-hearted respect one has to be an ice-hearted ideologue. These fools are not likely the same people who would tear down Confederate statues—but the same mentality: people who would cleanse history of its complex and moving subtleties, leaving us with a false image of the past and thereby depriving us, white and black.

Speaking of deprivation, I have never seen “Lady Bates” anthologized, and I doubt I ever will. That bears as much a chance as seeing on the reading list for college English majors Joseph Conrad’s great short novel The Nigger of the ‘Narcissus.’