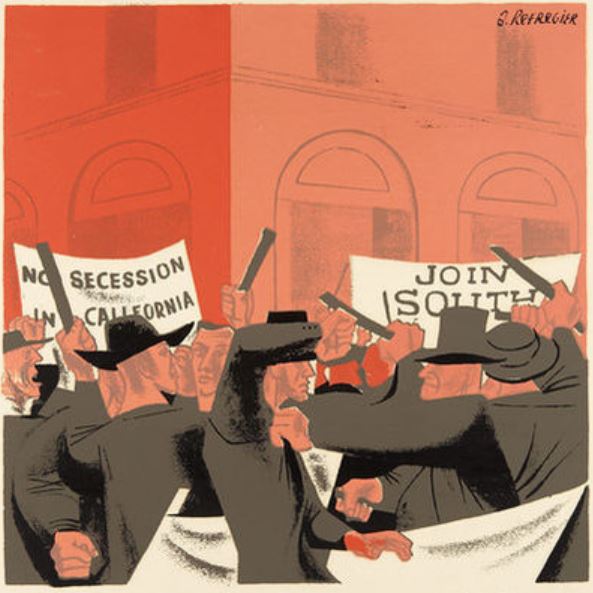 For we must consider that we shall be as a city upon a hill, the eyes of all people are upon us. —John Winthrop

In the movie Alien, an extraterrestrial predator is unwittingly brought onto a spaceship. Starting out small, it steadily becomes unstoppable and increasingly lethal while the bewildered crew is picked off one by one. At one point, the remaining crew asks the resident android how to kill it and his response, in a surprised tone, is, “You still don’t know what you’re dealing with, do you?”

Equally bewildered are conservatives, libertarians, independents and the few remaining classical liberals (an endangered species). Many are in denial, or in ignorance, over the significance of the past four years.

I am the first to admit—and have been told by some editors—that some of my submissions to various websites and magazines have an emotional feel to them. Frantic, they say; almost desperate. And I have been told to tone it down, or they won’t publish my essays. And they don’t. True, I admit it, part of that is the emotional Cuban makeup in me. But, apart from me, there is also a very real, existential, danger to this country that seems to meet with little resistance.

I experienced totalitarianism in Cuba. It’s not pretty. It may have been at a young age, but I can assure you that it is something that you never forget. Communists destroyed my native country, its economy, its social life, its literature, its religion, its art, its education, the families. The history of Communism is one of continuous mass murder and the destruction of art, literature, science, agriculture, business and history that belies the promises of universal brotherhood and wealth for all. They want to repeat that here. A fellow Cuban had the chance to speak at the National Republican Convention and warned of the parallels. A couple I know, a Russian and a Ukrainian are as alarmed as I am over what is occurring in this country. Nor are we alone. A professor who escaped Communist Romania fled Columbia University. Ukrainian Victoria Spartz (who was running for US senator from Indiana) warns of the danger. Social engineering at the local level by arrogant, leftist, school bureaucrats in Maryland made immigrants from China and the former Soviet Union experience déjà vu. Another Russian, Izabella Tabarosvksy, has pointed to the collective mentality that is rapidly gaining ground among leftists in America. Jennifer Zeng from China and Darian Diachok from Ukraine have tried to warn Americans about the dangers of Socialism, since there was a Communist, Bernie Sanders, who actually ran for President in the Democratic Party. Russian comedian Konstantin Kisin has been given a list of things that he may not joke about, to which he quipped he felt like he was right at home in the Soviet Union. Ukrainian Veronika Kyrylenko has warned that America’s free speech is under attack. Several Venezuelans are experiencing déjà vu. Not to mention American scholars who have thoroughly studied Communist history. The noose is getting tighter and tighter on an almost daily basis.

And yet, we feel like we are Cassandras: Why won’t you listen to us? This is serious!

All the signs are there: The hammer and sickle is flying in Seattle, Chicago, New York, Portland, Austin, San Francisco. Children are being indoctrinated in many schools. The same is going on in universities, where purges periodically take place. Histories are being rewritten and falsified by Marxists to the point of caricatures. The major news outlets have become peddlers of propaganda; they have engaged in blatant fake news, or just as effective, news blackouts. Political and social opponents of leftists are demonized. Physical attacks by Antifa and BLM, the Communist versions of the Brownshirts, have become common and at times deadly. Like Isis and the Red Guards, they have toppled statues of prominent individuals, often aided and abetted by local Democrat politicians. Dissenters and political opponents are declared insane and demands are made that they be institutionalized. Radical ideologies are being promoted everywhere, including the military. Mandatory self-criticism sessions (on “whiteness” and “white privilege”) is becoming common. They are attacking religion in a myriad of ways. Censorship is being imposed everywhere, from comedy to science. Beloved holidays like Thanksgiving and Halloween are attacked. Characteristic of the totalitarianism we experienced, everything is becoming politicized, even the pandemic. Leftists voices have been raised that the Constitution should be trashed, that the opposition party (Republican) should be abolished, that Trump supporters and Republicans in general should be exterminated (i.e., genocide) or placed in gulags or death camps. And like a cancer that has metastasized, every institution has been infiltrated, no matter how originally apolitical the institution was before. Conformity is demanded. “Divisiveness” is condemned. We must all speak with one voice, think with one mind.

In Conundrum, a stage play that I wrote, I explored the question of, does a democracy have a right to defend itself if its citizens want to destroy that democracy? Theodore Dalrymple put it succinctly: “This raises the question of how far we tolerate the intolerant, that is to say those whose desire, sometimes elevated into a goal, is to destroy the very tolerance that they enjoy, and who would use their freedom to destroy our freedom.” 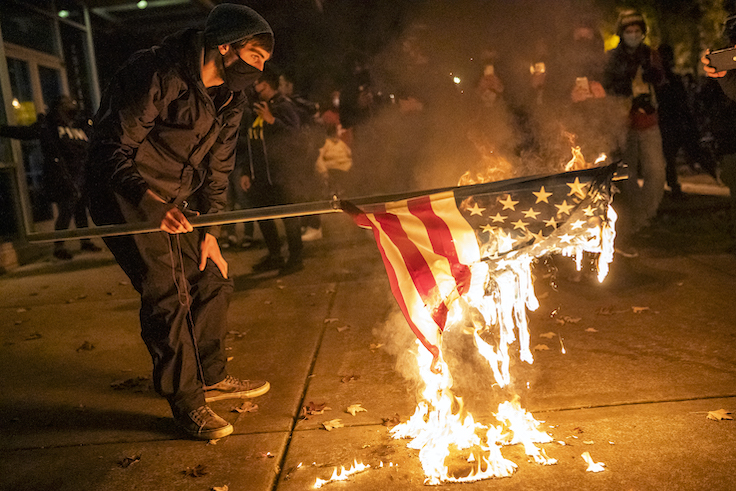 Nonetheless, what happened to defending the Constitution from all enemies, foreign and domestic?

We have a replay of history wherein a large group of relentless fanatics are hellbent in taking over a society, mutilating it and transforming it into their envisioned utopia. Nor do we have to restrict ourselves to the 20th century. When Christian fanatics took over the Roman Empire, they would go on a rampage overturning statues and desecrating pagan temples, sometimes aided by sympathetic government officials. The non-fanatics were at a loss when confronted with these people with their arrogance and their relentless aggression and had no idea how to respond effectively, and did not organize resistance.

My wife is from Indonesia and, like I, has developed a deep, deep, intense love for our adoptive country. Although not having personally experienced Communism, she sees the hatred that leftists who are running rampant in various cities have for this country. America has been very, very good to us and aside from a personal gratitude and admiration from our own personal experience, in my case, as a historian, I see the importance of America—for Western civilization. As exaggerated as that may sound to some skeptics, the fact of the matter is that America is the gold standard for freedom in the world. Other countries’ inhabitants measure their freedom to that enjoyed in America. To my knowledge, no other country has the degree of freedom that Americans enjoy and that the so-called Politically Correct (i.e., Communists) want to quash. Britons have a democracy, but they have no freedom of speech. Neither does Germany. Nor Sweden. Nor Italy. Certainly not Canada.

In addition, America is responsible for the fact that for the past 75 years, there has been no major military cataclysm in the world (yes, I know that there have been a few isolated flareups). The League of Nations and United Nations are American ideas, forcefully promoted by America. And America-created NATO has imposed peace in Europe instead of its periodical civil wars. The ages old concept that if a country wanted the territory of another neighboring country well, you just took it, has pretty much become obsolete, thanks to America.

At times, in repressive regimes, the people have waved the American flag as a protest to that regime, even sang the American national anthem—while Communists in this country burn that same flag.

Unfortunately, the response of many Americans, particularly libertarians, classical liberals, and conservatives, to the inroads of Marxist totalitarianism in society is to . . . whine. And make comments in websites. In libertarian and conservative websites they write genteel essays while cities burn. To those who complain that their children are being indoctrinated in schools by Marxists, or their businesses are being burnt down, I have urged them to band together and respond. On reading what I wrote, some felt faint and had the vapors. “They take the low road; we should take the high road.” “Violence never solved anything.” “They’ll change when they go out in the real world and get a job.”

The great Athenian Demosthenes cried out to his confused and divided countrymen to resolutely stand together against the approaching danger of Macedonia: “In God’s name, I beg of you to think!”

In Illegal Elian, another stage play that I wrote, the main character, a Cuban living in Miami, was asked by his relatives why he was no longer interested in politics as he used to be. He responded that it was because of futility, because the people that were coming forth from Miami to challenge the Communists in Cuba were buffoons. The gangsters were being opposed by . . . clowns. And he gave the (real life) examples of a group who went on a boat to infiltrate Cuba and start a guerrilla war—and got stranded in the ocean because they forgot to put gas in the motor. Or the ones that went to the Everglades to train for guerrilla warfare—and had to be rescued because they had got hopelessly lost. Well, the same is true in America. The Democratic Party has embraced Socialism. That is a fact. Yet, most Republican politicians, particularly at the state level, are apparently too terrified to assert their principles, unwilling to act.

And now that Biden supposedly won the presidential election (albeit through what some have called rampant voter fraud), leftists have begun compiling a list of enemies that they have openly said they are going to target and the censorship that they employ has ratcheted up. And demands have come forth that the lawyer representing Donald Trump be disbarred for the crime of representing him.

Yes, it is true, I admit it. I admit that I am being alarmist but, in my defense, there are certain times when it is appropriate to be alarmist. Besides, I’m Cuban. Cubans don’t “Keep calm and—” whatever.

Americans have always been able to fight off enemies from without, but now, from within . . . I am very pessimistic.