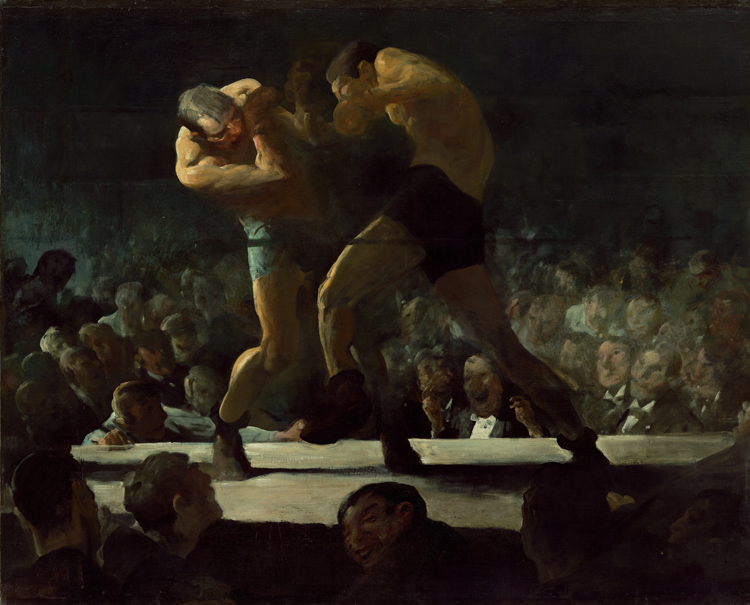 The name ‘Boxo’ popped into my head the moment I spotted him a little before noon one sunny October day on Bloor Street West in front of the Harvey’s across from Varsity Stadium. In second year at University of Toronto at the time, I was on my way to a twelve o’clock English class at Victoria College.

It was hard to say what age Boxo was from his lined and weathered face. With the grey stubble on his cheeks and chin, the burgundy wool toque pulled down almost to his ears he could have been anywhere from forty to sixty. His worn, herringbone tweed overcoat a couple of sizes too big for him fell below his knees to his skinny calves, blue, red and yellow Argyle socks bunched at his ankles in soiled desert boots that were at least a size too big and had one brown and one black lace.

What caught my attention most of all was the well-used but still in reasonable condition pair of eight-ounce Everlast boxing gloves on his hands, the same kind I knew Muhammad Ali used to wear. He held them up at chest-level and with his head tilted forward slightly he punched, jabbed, left- and right-hooked the air, alternating the speed and intensity of his punches like he knew exactly what he was doing as he shuffled along Bloor Street ahead of me—his arms still working while we waited at the Bedford light, Boxo with his eyes closed, punching away.

By the time we’d crossed the street I knew there was no way I’d be attending my twelve o’clock lecture.

Where had he come from? Where was he going? The obscurity of the situation compelled me to follow him . . . along Bloor heading east on the north side of the street. His routine unchanging, head tilted down, eyes half-closed, he shuffled along bobbing and weaving more vigorously now, feinting, ducking, dodging invisible punches, every so often launching a flurry of blows against his imaginary opponent. I stood beside him at every light. He didn’t notice me; I don’t think he could have he was so busy punching.

Past Yonge Street, Church, Jarvis and Sherbourne, we headed across the Bloor Street viaduct, the two of us an odd tandem moving slowly along, he caught in some deep inner drama, and I following him—stalking we’d say these days—watching him in a sort of bewildered fascination to find out what was up: Who was this character? for that is how I thought of him. A character in a story once removed from reality into which I had inadvertently drifted and in which I was taking part.

We crossed Broadview, Boxo setting off along Danforth for Pape. At Logan a few blocks further on, he stopped suddenly, rubbed his nose with the tip of his right glove, leaned his head back and gazed up at the sky. Or appeared to gaze. I had remained about ten feet behind him. With his back to me I couldn’t see whether he opened his eyes or not. After about thirty seconds, from the movement of his shoulders I could tell he took a long deep breath and exhaled, after which he touched the tips of his Everlasts together twice and off we went.

At Coxwell reality hit: What was I thinking? I really had become a stalker! Enough was enough. I had a lecture at three that I couldn’t miss.

I left him on Danforth, glumly watching as he shuffled off, wondering if I would ever encounter him again; disappointed in one way that I hadn’t given in to curiosity and spoken to him, yet proud of myself at the same time that I hadn’t, and had respected the man’s private odyssey to who knows where. Whether I saw him again or not didn’t really matter at that point. I knew I’d just had one of the more memorable experiences of my life. I ran into the subway station hoping to make my class.

But see him again I did. Three more times over the next two months, twice going west, again on the north side of the street, past St. George, Spadina, Bathurst, our routines the same as before, he pressing indefatigably on while I followed indefatigably ten feet behind. It grew late both times. I had commitments to keep, school work to do. I realized that as much as I was enthralled with the man and his mysteries, the Boxo obsession was getting out of hand. I watched him battle on down Bloor Street West, scooted into the Dufferin subway station and went home.

Then in early December, coming out of the Bob Miller Book Room on Bloor beside the Park Plaza where I’d bought a textbook for one of my courses, there he was straight ahead. I hurried to catch up and at the Avenue Road light stood closer to him than I ever had, resolved this time not to abandon him, to follow him wherever he was bound, as if I was Sancho Panza to his mad Don Quixote—

Half way across the Bloor Street viaduct he stopped suddenly, frozen to the spot, his arms up in front of him fixed in mid-punch, his body motionless, his breath steaming. There were no safety barriers in those days above the concrete railing: was he going to jump?

He held the stationary pose for almost ten minutes before he thawed so to speak, and resumed his routine.

At Main Street he turned right, went up over the railway bridge and headed south past Ted Reeve arena to Kingston Road, down Southwood Drive, left on Wineva to Queen Street, crossing to the south side then turning east past Glen Manor park. He slowed as he came to the light at Beech Avenue. There being no traffic at the intersection, he crossed against the red light and continued at his slower pace past the GOOF restaurant. As a result of the large coffee I’d had with my breakfast I needed to find a bathroom. I knew the GOOF, having grown up nearby. After a glance at Boxo, still moving at his slower pace, I darted inside, raced downstairs and had one of the fastest pees of my life.

I flew out the door to the street, turned fast and gazed along Queen, my heart sinking. There was no sign of Boxo in either direction. On a chance I ran east, glancing up and down the side streets as I sped along. It had only been three or four minutes, he couldn’t have gone far.

A streetcar was in the loop at Neville Park Boulevard. The car was empty, its doors closed, the driver in his seat sipping a takeout coffee.

Would he have gone down to the beach? I asked myself but before answering the question set off down Neville Park to the lake. No sign of him west toward the boardwalk at Silverbirch, I ran the other way to where the beach ends, waves lapping gently against the retaining wall that fronts the waterworks. But no Boxo. He’d managed to give me the slip …

In March 1983 I was teaching at a high school in North Toronto, living in the Beach, two blocks from the lake. On the last Sunday of the month, after breakfast at the GOOF, I walked down Beech Avenue for a stroll by the lake with my takeout coffee. There were more people about than I thought there would be, but it had been a relatively mild winter. The ice along the shore had been gone for two weeks. Spring had arrived, and with it the joggers, pet-walkers, strollers and cyclists.

I turned left and went the other direction past Balmy Beach canoe club to Silverbirch where the boardwalk ends but the beach continues. I headed across the sand toward the waterworks plant, somewhere I hadn’t been since the day ten years earlier when Boxo disappeared.

But at Neville Park, where the beach ended, where the water was usually halfway up the waterworks retaining wall at that time of year, it had receded about thirty feet, maybe more. I’d grown up in the Beach and had never seen or heard of the level being so low. Yet there I was making my way across a wide strip of sand beneath the ten-foot high retaining wall, articles of flotsam strewn about here and there that the water had left behind: driftwood, plastic and glass bottles, sun-bleached children’s toys, a hairless doll, a baseball cap, a plastic toy boat, the bottom half of a canoe paddle, candy wrappers, soft drink cans, a folding aluminum lawn chair bent badly in two places with half its nylon webbing missing, a weathered wooden produce crate, a heel-less high heel, a desert boot with its crepe sole half torn off—

I picked the desert boot up, along with the lawn chair and the produce crate. An idea had come to mind.

During the week I bought four rolls of colour Kodak film for my Super 8mm camera; called Gerald, an editor I knew who would do a soundtrack and titles—he had a new Commodore 128 computer—began gathering the necessary props and costumes I would need then called the two Jims: Jim S. my writing partner, and Jim M., who taught with me, to discuss the idea and the roles they might play.

My housemate at the time provided a herringbone tweed wool overcoat that had belonged to his father, a burgundy wool toque, a pair of rundown Clark desert boots, and a pair of eight-ounce Everlast boxing gloves, the kind Muhammad Ali had used. I bought a pair of mirror-lens sunglasses so that people wouldn’t recognize and identify with me rather than the character I was playing.

In a novelty store I found a toy glider, a foot-high book of matches: black cardboard with THINK BIG! printed on the cover in large white letters. In a convenience store I bought several boxing magazines, a PEP chocolate mint candy bar, and a keychain with a small boxing glove dangling from it.

Jill, the ten-year old daughter of some people I knew agreed to play a role. Jim S. and Jim M. would as well, Jim M. working the camera and giving directions. The coming Friday was April Fool’s Day. It was also Good Friday. We’d have locations pretty much to ourselves.

All were agreed that, rain or shine, we’d meet on the south lawn of the waterworks at 9:00 am Friday morning, at which time the camera would roll on—

I have squandered my resistance
For a pocketful of mumbles,
Such are promises.
—The Boxer, Simon & Garfunkel