22nd May: On the Anniversary of the murders of Lee Rigby and 22 members of the audience at the Manchester Arena.

I couldn’t go to any of the commemorative events at the site of Lee Rigby’s murder in Woolwich South London this year. Friends did attend and thus I know that, as usual, everything was decently and respectfully done.

There are events in Manchester today, including a minute’s silence and a memorial service. But from my armchair here in east of East London it seems that the news is largely ignoring Lee Rigby (so last five year) and is reporting Manchester from the point of view of condeming, less the jihad that murdered schoolgirls and their mothers, and more the groups who have been trying to bring the threat of jihad to public attention.

Such as the New Statesman – “How the Manchester bombing turned the city into a symbol for the far-right”, which condemns the football lads (be they FLA or DRLA) and praises to the hilt, Figen Murray and Dan Hett the mother and brother of murdered Coronation Street fan Martyn Hett for their anti-racist support for fellow Muslims. 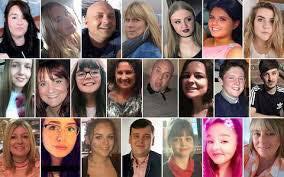 The Guardian does pay tribute to each individual which is quite touching. and then gives Dan Hett a whole column to himself to warn about the ‘hostile environment for immigrants’. That under Sharia law his late brother would not last long, and his mother would probably also be honour killed for marrying a non-Muslim non-Turk doesn’t seem to have come to his notice. The Guardian doesn’t allow comments very often any more. Comment is no longer free.

The Telegraph reviews a Channel Four documentary – A Year of Hate Crime, review – glimmers of hope emerge from Britain’s 2017 nightmare. So far comments are allowed, but many have been deleted.

The opening  of Manchester: a Year of Hate Crime (Channel 4) was a litany of horror,  the stuff of dystopian nightmares that starkly illustrated the extent to which racism fuels hate crime.

Will Jessop’s austere film continued as such, documenting hundreds of incidents that occurred in the wake  of the Manchester Arena bombing. The headline-grabbing events –  such as the Islamophobic attack on Finsbury Park mosque – were interspersed with lower-level incidents affecting far fewer, yet emblematic of dwindling human decency and respect towards minorities.

There were glimmers of hope: The admirable response of the Finsbury Park imam protecting the attacker from retribution, and the absence of wider reprisals; the steady community work of Greater Manchester police; the conciliatory sermons of local imam, Irfan Chishti.

This was not a film to inspire much optimism. While it would be easy to dismiss Tommy Robinson and his band of knuckle-dragging acolytes as the lunatic fringe, the truly alarming development was how the antagonists are getting younger.

I find my hope in the comments.

The top one, at time of writing is

Read them before they are deleted.