A Barber Shop Chat on the French Elections 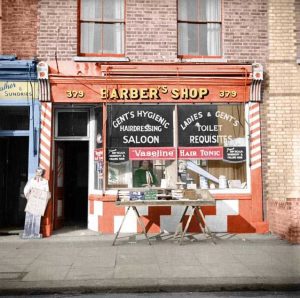 The day after the first round of the French elections, I went to my barber in Paris to learn what the results really meant (I also needed a haircut). Macron had come in first, with 27.6 percent of the vote, Marine Le Pen second with 23.4 percent, and Jean-Luc Mélanchon third with 22 percent.

I’m a great admirer of my barber. No man is a hero to his valet, perhaps, but my barber is a hero, of a quiet kind, to me. He emigrated to France from Morocco 25 years ago, and now runs a tiny barber’s shop near to where I stay when I’m in Paris. The life of a very small businessman, especially if he’s an immigrant, isn’t easy and requires a kind of chronic courage and determination, much more difficult than the acute type. Needless to say, the COVID years have been particularly difficult for him, but he has survived. When he had no customers, he still had to pay his rent in full; he received no help from the government because his was a one-man business. Many were the businesses that received state help but didn’t need it.

My barber is highly intelligent and from the way he talks, I should guess that he received a decent education in Morocco. I mean no disrespect either to him or to barbers when I say that, in other circumstances, he might have occupied a more elevated position in society. The last time I went to him, we discussed French politics over the snip-snip of the scissors.

“Since I arrived in this country,” he said, “I have heard the same discussions on the same subjects by the same people.”

“France,” he continued, “is like a man who has complained of toothache for 25 years but hasn’t found the time to go to the dentist.”

I suppose, when you come to think of it, that captures the situation in more than one Western country. Naturally, I was eager to hear what he had to say about the election results, which would be as penetrating as that of any professional commentator.

Another customer, in his late sixties I should guess, entered the shop immediately after me. I was worried that his presence might inhibit the discussion, but once in the barber’s chair, my bib around me, I asked the barber, “Did the election results please you?”

I needn’t have worried about inhibition. No sooner were the words out of my mouth than the other customer exploded with anger. He almost trembled with rage, all of it directed against the incumbent (and winner so far), Emmanuel Macron. I don’t recall ever having witnessed a reaction like it.

I knew that those who didn’t like or approve of Macron were said to hate him: Few people, it seems, are merely indifferent to him. I’m no great admirer of him myself, and I think in his own way he’s potentially dangerous: He’s determined to push ahead with European integration that will, sooner or later, lead to an explosion. But to witness the visceral hatred toward him nevertheless shocked me.

He has long been accused of being the president of, or for, the rich. That he once worked for the Rothschild bank only encourages this view. There is in the accusation the larger assumption that the interests of the rich and those of everyone else are diametrically opposed and necessarily irreconcilable.

Few people can escape entirely or for very long thinking of an economy as a cake, such that a larger slice for you is necessarily a smaller one for me and vice versa. And since the slices of the supposed cake that most of us have are distinctly modest by comparison with those of the rich (the rich being those with at least five times as much as we), the room in our minds for resentment is ample. And even though I know that the metaphor of an economy as a cake is a dangerous one—how many millions were killed in the name of economic egalitarianism in the 20th century!—still I catch myself occasionally feeling resentful at the pharaonic incomes of people who seem to me not to deserve them, though I’m not myself yet on the breadline and have no desire either for great wealth.

Moreover, inflation was accelerating fast: Fuel would soon be at 4 euros a liter, which would make driving unaffordable. What would Macron, the president of the rich, do about it? Nothing. What had he done for the ordinary person in the last five years? Nothing.

The barber asked very mildly why, this being the case, so many people had voted for him. To this, the man had the perfect answer.

“Because they have nothing in their heads!”

This rather undermined the case for representative democracy.

“Democracy!” he said. “This isn’t a real democracy!”

This in turn raised the question of what a real democracy would be like.

I suspect, though, that it’s Macron’s manner, rather than his policies, that aroused this man’s hatred. The fact is that the president has often let slip his disdain for much of his electorate, a disdain that has the merit (if it’s a merit) of being sincere. And my experience of humanity, for what it’s worth, leads me to conclude that disdain or contempt infuriates far more than injustice. People can tolerate injustice, but they can’t tolerate disdain.

As I went to pay the barber after my haircut, he said, “But you haven’t told us what you think.”

“I am too wise for that,” I said, as I bid goodbye to the other customer.