A Kindergarten Program for Ukraine 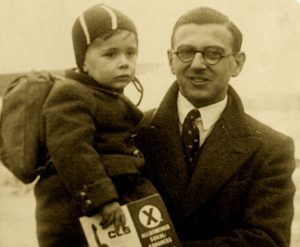 Some are born great, some achieve greatness, some have greatness thrust upon them.

The images of children in Ukraine being victims and targets of Russian aggression are harrowing and arouse passionate indignation as health facilities are being attacked and the maternity hospital at Mariupol bombed on March 9, 2022. Amidst the devastation of besieged cities in Ukraine, at least 4.3 million of the total of 7.8 million children have been displaced.

Internally, more than 100,000 children are living in institutional care and boarding schools. More distressing is that 1.7 million have emigrated into neighboring countries, Poland, Hungary, Slovakia, Moldova, Romania. Most children are being taken by their mothers, but some are sent alone across the border by despairing parents. Many are met by well- meaning people offering help, but some children may be subject to violence, abuse, and trafficking.  According to official estimates, one child from Ukraine is a refugee every second, 55 a minute.

In the days when German Nazis were in control, wrote Elie Wiesel, there was danger everywhere. “The killer kills and the Jews died, and the outside world adopted an attitude of complicity or indifference. Only a few had the courage to care.”  At this moment when the world is witnessing Russian brutality, devastation on the besieged cities of Ukraine, piles of corpses rotting in the streets, when an estimate of 3.5 million have left the country, and another 6.4 million have been displaced, it is a great pleasure and welcome relief to remember and honor a man who had the courage to care and saved children from a barbaric war criminal, the protype of the Russian ruler, Vladimir Putin.

The memory of Nicolas Winton, the man to be honored, is occasioned by the death on March 14, 2022 of Vera Gissing, the literary translator, at the age of 93.  Gissing, was born Verushka Diamantova  in July 1928 in a small town near Prague into a secular not observant Jewish family.  Her father was a wine merchant.  When the Nazi forces invaded Czechoslovakia and occupied her town in March 1939 her mother sought to have her leave the country. As a result, Verushka shortly before her 11th birthday, said goodbye to her parents,  who gave  her a leather-bound diary in which to record her experiences, and boarded a train together with her 15-year-old sister   and 75 other children which took her out of the country.  She thought, as probably also did her parents, that she would return home in a year.

Verushka was one of the 669 Czechoslovakian children, girls and boys, mainly Jewish, who were saved from the German Nazis in 1939 by the heroic actions of Winton, part of the Kindertransport (children’s transport) rescue effort.  The Kindergarten event was an organized program to rescue children from Nazi occupied territory between 1939 and 1940, which the great powers were not doing. In July 1938 the Evian, France, Conference of 32 countries, organized by :President F.D. Roosevelt had discussed the Jewish refugees problem. Delegates expressed sorrow over the increasing number of refugees but no country was prepared  to increase their quota for immigration. The U.S.  did not send a senior official but sent Myron Taylor a businessman and close friend of FDR.

After some discussion, and strong difference of opinion, the British government agreed to allow in unaccompanied minors under age 17. It was understood that at some point the children would be returned to their families.  Britain did admit almost 10,000 children.  The first Kindertransport left Berlin on December 1, 1938, with 200 children and arrived in Harwich, England the next day. Other trains followed, from Germany, Austria, and then Czechoslovakia. The children were placed with foster families or in temporary holding centers. The issue is still addressed with revelations about the specific Nazi actions, the general reaction to the Holocaust, and the nature of Western immigration policy. It was announced in December 2018 that the German government would make a one time payment of about $2,800 to each surviving  child of the Holocaust, a small measure of justice.

Vera escaped death, lived for most of her life in London, and recounted her story in a book, Pearls of Childhood, based on 17 volumes and her diary, mostly conversations with her parents, telling a sad story. Her mother dies of typhoid two days after liberation from Bergen-Belsen, and her father, imprisoned at Terezin concentration camp and was then shot by the Gestapo.

Vera was lucky.  She was put a train, the seventh of the eight organized by Nicolas Winton between March and August 1939, went to England, where she was adopted by a Methodist family in Liverpool, where she was loved, and attended  for a time a school for Czech refugee children in Wales.  After the war she returned to Czechoslovakia for a short time but then went back to London and to a successful career and marriage in 1949  when she became Vera Gissing.

Gissing did not discover the identity of the man who saved her life until 1988 when she was invited to attend a BBC TV show, That’s Life, planned and organized by Esther Rantzen, who had also invited the unsuspecting Winton and some of the children he had saved. Gissing was told, to her amazement, she was actually sitting next to Winton, who had also been invited without knowledge or suspicion that the audience would be composed of some of the other children he had saved.  All of them rose to honor the man who saved their lives.  Gissing, who died at age 93, chronicled the story of a good, kind man, who died on July 1, 2015, aged 106.

The story of Winton is an extraordinary one, a man who kept his wartime activities secret until his wife Grete, Danish born, in 1988 found a scrapbook of them  in an attic in their house.

Nicolas Winton was born in London on May 19, 1909 into a German-Jewish family, Werthheimer, who had emigrated to Britain at the beginning of the 20th century, but was baptized in the Anglican Church. He became a broker on the London Stock Exchange, was a socialist, particularly close to Aneurin Bevan, and left wing causes, and was opposed to the British government policy of appeasement.

His encounter with destiny began by chance. In December 1938, aged 29, he was planning a skiing trip to Switzerland but was invited to visit a friend in Prague who worked with the British Committee for refugees from Czechoslovakia. Winton immediately joined the mission of the organization and began, specifically to help children, the effort modelled on the Kindertransport. He collected thousands of applications from Jewish parents wanting to save their children. One of them was from Vera’s mother.

Winton organized eight transports between March and August 1939:  a ninth transport was planned to leave in September but had to be cancelled after Adolf Hitler invaded Poland. Sadly, all those 250 due to depart on this train on September 1, 1939 were murdered during the Holocaust. During his activity, Winton symbolically lived in a hotel in Prague in the Wenceslas Square.

Winton returned from Prague to England, raised funds for the rescue mission, got Home Office entry permits, forged some to speed the process, arranged for the children to be placed with foster parents or in boarding schools, and organized the train schedule via the Netherlands to Liverpool Street station in east London.

He did not think of himself as a hero, “I was never in danger,” but heroism was thrust on him. He had no urge or agenda to save the world, working in later years for a mental health charity and hones for the elderly.

He was belatedly given many awards, a knighthood from Queen Elisabeth, and the Order of the White Lion, highest Czech state order at a ceremony which posthumously honored Winston Churchill.  Winton is sometimes dubbed the British Schindler, but he always rejected the analogy. A statue of him at the Maidenhead rail station depicts him on a park bench reading a book which contains images of the children he saved, and the trains that took them to safety.

Winton remains a model to oppose human evil, a man who choose to act when others did not. He embodies goodness, kindness, honesty. We need his counterpart today to save the children of Ukraine.

PrevOn Refusing to Believe Women Raped in Psychiatric Wards
The Light of Days: Women Fighters of the Jewish ResistanceNext