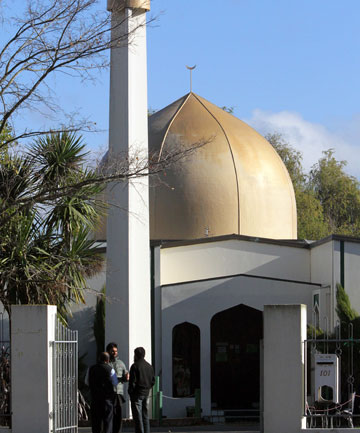 As Rebecca said on Friday the killing of worshippers at the Al Noor and Linwood Masjid Mosques in Christchurch is a terrible story.

Brenton Tarrant said that he first desired revenge for Ebba Akerlund an 11 year old girl killed in a jihadist attack in Stockholm in April 2017. The deaths of 22 girls and their mothers, killed at the Manchester Arena the following month, hit me hard; harder even than the London bombings of 2007. But you don’t avenge the deaths of innocent children by killing other, even smaller innocent children. Brenton Tarrant must have noticed that 3 year old Mucad Ibrahim, killed as he ran for his daddy was a baby. That 4 year old Abdullahi Dirie was not a jihadist; neither is the 4 year old girl currently in hospital fighting for her little life.

In one of the SAS memoirs published after the Gulf war Andy McNab described the moment his troop were noticed by a small boy herding goats. They had to leave very quickly. The mission could have been compromised. But they couldn’t shoot him. “We are the SAS, not the SS” They were able to get away before the alarm was raised. That’s how a proper soldier treats children.

The Al Noor mosque should receive some official scrutiny but indiscriminate carnage of innocents isn’t the way. Maybe the New Zealand authorities have, or will now that his friend Mark Taylor is soon to be returned ‘home’ from a Kurdish prison, investigate the circumstances around the radicalisation at Al Noor, of jihadi Christopher Harvard, and any part played in the radicalisation of Daryl Jones.

This is an archive report from reputable  New Zealand newspaper Stuff from 2014. Why is it archived, by the way?

When the Jones boys converted to Islam, it caused quite a stir in Christchurch.Suddenly Daryl and his younger brother Nathan, who grew up in a strong Christian house, were sporting beards, learning Arabic and wearing flowing robes. Carloads of Muslims … would turn up at the family’s home in a smart east Christchurch suburb,

Daryl moved to Sydney around 2008 and converted to Islam soon after arriving. a source said. “Daryl was looking for a belief system that worked for him. Muslim friends offered brotherhood if he converted to Islam.” Nathan, still in Christchurch, converted soon after with the help of Saudi Arabian students he was friendly with.

In Sydney, Daryl began attending the Lakemba Mosque, known as a hotbed of radicalism, and drew the attention of counter-terrorism authorities because of the company he kept. He changed his name to Muslim bin John, married a Somali woman and around 2009 headed to Saudi Arabia and then Yemen.

Jones was killed alongside Australian Christopher Havard, whose parents said he was introduced to radical Islam at the Al-Noor mosque in Christchurch.

Mosque leaders confirmed Havard stayed there and studied in 2011, but denied radical teaching took place. But a man who attended a converts’ weekend at the mosque 10 years ago said a visiting speaker from Indonesia talked about violent jihad and plenty shared his views. “Most of the men were angry with the moral weakness of New Zealand. I would say they were radical.”

An Egyptian immigrant who has seen first-hand how Muslims are recruited for jihad said Western converts were vulnerable because, besides feeling marginalised from Western society, they were curious about their new religion and wanted to dig deeper. “The [recruiters] have a brainwashing process known as CRA – conversion, radicalisation and activation,” said the source. “Once the person is radicalised, they tell them, ‘here is your role, your responsibility’. Now the person feels they have something to do, to be important, to be someone.”

Havard was the subject of an AFP arrest warrant over the kidnapping of Westerners in Yemen in December, 2012. It is not known if Jones, who reportedly fought under the name Abu Suhaib al-Australi, was involved.

Jones and Havard were with five others in the convoy hit by a missile fired from a US drone in Yemen’s Hadramout province on November 19. While authorities believe they were “foot soldiers” of AQAP, they were not the main target of the attack.

The Jones family arranged for Daryl’s wife and four children to be resettled in Christchurch. His brother Nathan Jones runs a salafist group there and maintains that his brother was misguided and Islam is peaceful.

Mark Taylor made his way from Yemen to Syria and joined ISIS. He seems to have no connection to any Mosque in Christchurch. He is best known as “the bumbling jihadist” for his blunder when:

in October 2015, when he sent a series of IS propaganda tweets without switching off Twitter’s geotagging function, inadvertently revealing the militants’ precise location. He said he spent 50 days in an IS prison for the blunder.

Also for his regret that he never earned enough as an ISIS border guard (not a fighter) to afford a Yazidi sex slave. Instead he had to make do with two Syrian wives, who would not obey him.

“I had to explain to her on several occasions that she had to stay home and obey her husband.”

New Zealand Prime Minister Jacinda Ardern said her Government could not assist Taylor in obtaining a travel document, but the country “has an obligation not to make people stateless”.

“He would need to make his own way to a country where New Zealand has consular representation — something that, in his current situation, will be difficult to do,” she said. “All New Zealand citizens have rights under international and domestic law. Mr Taylor only holds New Zealand citizenship. As I’ve said before, any New Zealander suspected of association with terrorist groups should expect to be investigated under New Zealand law should they return.”

If he does return to NZ (his wife and children are in Indonesia)  it will be interesting what he might divulge.