All Hail to Columbus? 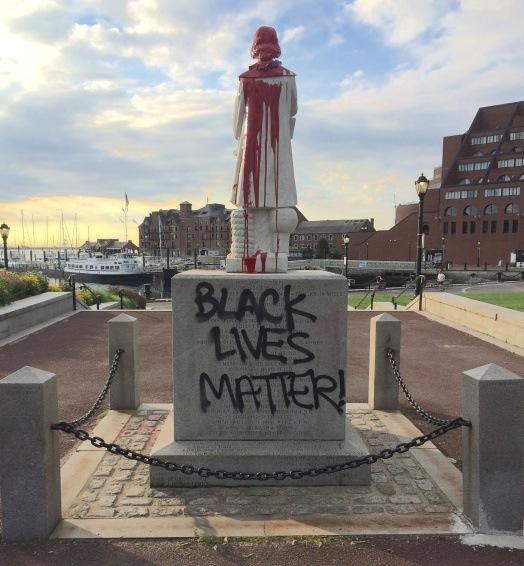 Every schoolchild knows that Columbus sailed the ocean blue in 1492. He and his men sailed in La Pinta, La Nina, and the Santa Maria. They may also know that his contemporaries all laughed at Christopher Columbus when he said the world was round. But who’s got the last laugh now that the US federal government in 1971 made Columbus Day a national holiday in October, the only person other than Martin Luther King to be so honored?

Born in the Republic of Genoa, and financed by the Spanish monarchy, not by any Italian, Columbus explorer and navigator, made four voyages across the Atlantic in the hope of finding an alternative trade route to reach the East Indies by sailing west and finding gold and silver. Instead, sailing from the Canary Islands he reached San Salvador, the Bahamas.

Columbus is popularly regarded as the discover of the Americas, but he in fact was anticipated by the Viking Leif Erickson in the 11th century. But it was Columbus who is acclaimed as the starter of the European colonization of the New World, starting with the 2500 who arrived with him in 1493. He did not find gold but he did find natives, and it is this reality and his treatment of them that has given risen to controversy.

Among other things he headed the transatlantic slave trade. There remains controversy over the extent of his actions and those of his men. Differences exist among historians over the nature and degree of responsibility for the poor treatment, at one extreme termed genocide, of native peoples, the Taino people of Hispaniola, and Arawak people. Included in the criticism is pressure of overwork, the importation and spread of European diseases, possibly syphilis, and the imposition of a form of slavery and sexual slavery.

Not surprisingly, Columbus is remembered in his hometown by an airport named after him and by his natal home becoming a museum. In the United States his name, Columbus or Columbia, began appearing as a synonym for “America.” He is honored by statues, and his name given to the U.S. capital, the DC district of Columbia and the capital cities of Ohio and South Carolina, a busy traffic circle and intersection in Manhattan, New York City, and the Columbia river.

The country this year has been troubled, even confused, by the fact that a number of cities in the United States have been the setting for the destruction of monuments of those disliked for various reasons. These have mostly been prominent figures of the old Confederacy in the South. On this issue, the country is divided but an increasing volume of voices, not only President Donald Trump, has asked where does this destruction stop.

The most recent event has been in the city of Baltimore where in August four statues of people who were associated with the losing side in the Civil War, including Robert E. Lee, Thomas “Stonewall” Jackson, Chief Justice Roger B. Taney who authored the 1857 Dred Scott decision, and other groups, have been destroyed.

As far as one can tell Christopher Columbus, whatever else he did, never fought for the Confederate side in the US Civil War, and may not have owned personal slaves. Yet, in 2015, red paint and a hatchet were applied to a statue of Columbus in Detroit, and another in Boston was painted red,

A more serious event occurred in the middle of the night on August 21, 2017 when a monument to Columbus built in 1792, and erected by a Frenchman, and the oldest in the country, was vandalized in north east Baltimore. A group calling itself Popular Resistance used a sledgehammer to deface the base of the monument. A relevant video by someone naming himself Ty called Columbus a “genocidal terrorist” and declared, without detail, the future was racial and economic justice.

For this group that symbolically strikes in darkness, and is guilty of historical anachronism, Columbus represents the initial invasion of European capitalism into the Western hemisphere and the capitalist exploitation in the Americas on the backs of indigenous peoples.

Where does the destruction stop? The Rev Al Sharpton appears to have called for the destruction of the Jefferson Memorial. There are two issues. One is that destruction becomes infectious, inside and outside the U.S. For example, in November 2015 vandals in Mielec, Poland pulled down a monument of gratitude to the Soviet Red Army. On August 14, 2017 the New England Holocaust Memorial in Boston was vandalized for the second time this year.

The second wider problem is whether and should, 19th century behavior, and with Columbus 15th century behavior, be judged by 21st century morals and standards? Or should it be recognized as part of the history of the country, unwelcome though it may be to some of the country. A number, if not most, of the Founding Fathers owned slaves. Are their monuments to be destroyed or are they to be kept because the Founders established the Constitution?

The fear is that history is being erased? Already, a number of cities in the US have decided to change the name of Columbus Day to “Indigenous People’s Day”.

Abraham Lincoln is probably one of the few beyond reproach It is wise to remember his words about the two sides in the Civil War in his Second Inaugural on March 4, 1865, “both read the same Bible and pray to the same God, and each invokes His aid against the other.”